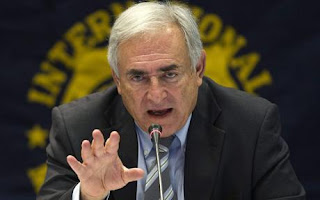 Power and sex is a heady mix but the arrest of Dominque Strauss-Kahn, the head of the IMF is, without doubt, the stuff of conspiracy theorists.  He has been accused of the sexual assault of a New York hotel chambermaid.

Strauss-Kahn is thought to have been considering a bid for France's 2012 presidential election so it's perfectly obvious he has enemies who would wish to see him humiliated.

In my youth I had a career in hotel management which I practiced in England, Switzerland and Germany.  It wasn't unusual for housekeeping staff to make complaints against guests and many, when investigated, were substantiated once the threat of police involvement was threatened.

There are some - usually men - who think, when they reserve a hotel room, they are entitled to abuse the staff as well as benefit from the usual services offered.  These folks are transparent within minutes of their arrival in the building.  The words 'please' or 'thank you' never cross their thin lips and their self-importance is highly visible.  Little do they know that experienced staff suss them out immediately and can have great amusement at the expense of their arrogance.  They are people who feel a hotel should feel privileged to have a 'VIP' guest such as themselves.

Now and again staff would have a titter at the exploits of the married man away from home who felt, if he ordered more towels for the bathroom, he was entitled to the company of the chambermaid who delivered them.  If only they realised how well trained the staff were not to explode into laughter when they saw the room resident emerge, pathetically naked, from the bathroom to accept the fresh laundry. I've always suspected they wished their middle name was Adonis.

It wasn't only pitiful married men who fostered a desire to looking for excitement; on several occasions international figures attempted more complex ways to ensure a female member of staff would enter their domain.

Never, in my years in the industry, did I hear of a court case connected with improper conduct being brought, by a hotel employee, against a guest. The issues were quickly resolved without the law being involved.

But Mr Strauss-Kahn's case is different.  There's no cover-up and the law appears to have been speedily engaged. Society has changed since my youth but I suspect there's more to this than a complaint from a chambermaid.

Of course it's humiliating for the boss of the IMF, who struts the world as the saviour of fiscally naughty countries, and the US law enforcers may decide his public abasement is enough of a punishment, although if the case does reach the law courts he may well be labelled as 'suffering' from satyriasis and be compelled to attend one of Patrick Carnes' clinics.

His arrest comes at a critical moment in French politics. France's Socialist Party, the main opposition party, holds a 'primary' contest to pick a runner for the residential race and candidates have to register soon.  Strauss-Kahn was widely expected to declare his intentions by late June.

Whatever the outcome of his arrest, his position of power looks distinctly much weaker than it did a week ago.

If I were a believer in conspiracy theories I would suggest that Mr Strauss-Kahn will be quietly removed from his post in the next couple of months.  Few would notice and what does it matter to joe public anyway?

As a non-believer I would like to see the man brought before his peers, if there is a good enough case against him.  Too often have I been aware of men, in positions of power, abusing female hotel staff in the anonymous environment of a hotel room then using their money and power to buy silence.
Tweet
Posted by subrosa at 09:14

Well, he was paying $3000 of our money per night for his suite. For that he clearly would expect something more than bed and breakfast.

Of course, if it had happened in London, he'd probably have managed to get a super-injunction to hush things up!

It seems that he did not fully understand the concept of "risk", that is the more you take risks the more likely you are to come a cropper. Worrying for someone who is head of the IMF. It might explain why so many poor countries are getting poorer.

What's so wrong with playing with the body of one when you play with the lives of billions?

It is strange the news bulletins following this even only give a couple of paragraphs to the actual incident followed by many more speculating on the effect it will have on the money markets.

The same emphasis and practice was adopted within days of the disaster in Japan.

Is is not sad when the one thing that is truly superfluous takes dominance.

Starched Egyptian cotton is what he paid for EP and I've yet to find knickers with a 200 thread count.

It's being said it was a 'honey trap' Demetrius, but there should be no excuses for him regardless of his job.

It's not the first time he's been up to such nonsense but he's managed to evade conviction.

Crinkly, there is that but this man's behaviour just shows me what little regard these arrogant elites have for the hoi polloi.

So far I've yet to read a certain G Brown could be given the post but that's sure to be mentioned soon.

The plight of the woman involved is immaterial. People in the hotel industry and people of misused power know this isn't an unusual situation. For some reason the usual coverup hasn't occurred and that's why I think there's more to it.

Rosa -I thought the irony would be obvious in my first post.

She says she was attacked at 1pm in the hotel rooms.

He says he checked out at noon, went to lunch with his daughter, then took a taxi straight to the airport, where he noticed he hadn't got one of his cellphones with him and called the hotel to ask if it was there - hence the police grab as until then they had no idea where he was.

Presumably the time he checked out is recorded.

Police are now moving the time of the attack forward by an hour to noon. (this is all in Corriere della Sera).

Even allowing him an extra hour it'd have to be quick (sorry) if he still managed the lunch.

"Whatever the outcome of his arrest, his position of power (in France)looks distinctly much weaker than it did a week ago."

I suspect the Italians could now invite him to stand in their election.

Sorry Crinkly, I missed it first time round because I was rudely interrupted here. It won't happen again. I'm locking the door. :)

The time should be recorded on his bill hatfield girl. The account is usually signed by the outgoing occupant and when payment is received a time and date is recorded.

The time of attack is immaterial as these days hotels have guests arriving and departing at all hours.

I hope the restaurant has CCTV.

Auch Joe, not even an Italian would try it on with a chambermaid. Surely not.

Oh No, does that mean we'll get Gordon Broon in the job now?

Hi Dram, if that happens, I will believe the world really is doomed !

Aren't we all assuming he's guilty before we have many details?

DSK had been complimentary about Gaddafi. Sarkozy can call on favours from the CIA after backing the Libyan war.

Money would normally buy silence. In this case even bigger money buys exposure.

God forbid Dram, but stranger things have happened in the world.

No Jo, I'm certainly not assuming he's guilty because I firmly believe in that nobody's guilty until tried before their peers.

But the fact he's not been allowed to pay off his accusers, as is my experience in this type of incident, speaks volumes.

Ah Tap, that's along the lines of my thinking now. Thanks for the link. I'll put you on my blogroll if you're not too adverse to that.

But Subrosa if he's been set up, if these allegations are untrue then obviously money wasn't going to buy him out of it. The whole would be to expose him as something or other wouldn't it?

I think there's definitely more to it.

oops, missed out a word

Last sentence of penultimate para should begin, "The whole point...."

Hi Jo. That's exactly why I think there's more to it than meets the eye. Usually money talks in these situations and often big money. The chambermaid would have perhaps been set up for life, or a good few years, with the monies these people throw at such incidents.

Well, it was with a maid rather than a bellboy so that might tell us something.

Bellboys get bigger hush money from my experience Woodsy. But that was some years ago.

No bail either. Sorry. Something really stinks here.

It does Jo, but perhaps it's how the elite cut their membership.