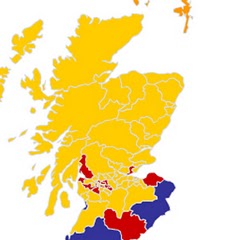 What a bonny political map isn't it?  You may like a look at some bloggers (and others) thoughts on the changes in the Scottish political scene.

There will be other bloggers who have posted on the subject and I apologise if I've omitted them.  If they would leave their URL in the comments I would be grateful.

No to AV... Yes to a whole new constitutional conflict

Scotland: voting to escape austerity, not the United Kingdom?

Annie votes to give up the national teat.

"Say not the struggle naught availeth..."

What have we learned from the past 24 hours?

SNP Headed For Overall Majority
Tweet
Posted by subrosa at 12:55

I'm delighted that Labour got what they have deserved. I just hope that the sheeple have long memories and don't forgive them!

The responsibility to ensure that happens rests with the SNP I think Rab.

Slightly late, but here is my effort:

Are we supposed to apply for the Euro if we get independence? Don't think I fancy that ...

Thanks for the link. It took me ages to find a photo' with a suitably smug grin to use as inspiration.

Belinda, I'll trade you an answer for a question (to everyone).

An independent Scotland would have to apply to the EU for membership. That would be granted without doubt - already in compliance with all of the laws/regulations that another accession state would have to change, for example. However Euro entry is mandatory.

Whether Scotland would be able to negotiate around that is a diplomats argument to be had in smoke(less) back rooms. But those are the public rules.

Can I pose a question about the electoral rules up there and see if anyone can educate me?

In Central Scotland the SNP elected all of their candidates. What happens if someone falls under a bus and there are no top-up candidates left?

Bonny, bonny, BONNY political map. I am so happy for all my friends in Scotland who have worked long and hard for this day.

Did you notice that Mr. Salmond quoted "Scotland Will Flourish" in his speech? I did. (Long time Corries fan so of course I noticed lol)

With an eye to the future
And a heart to forgive...

And speaking of the Corries, this song seems particularly appropriate:

The Dawning of the Day

And jolly good luck to Scotland say I.

All they need to do now is get rid of all the hangers-on and teat suckers, and they might have a chance of making a half decent country to live in.

Thanks for your answer. I wish I could help to answer your question but I don't know?

So the price of viability as an independent nation is compliance with EU regulations and ambitions, regardless of what people in Scotland might actually think of them? I think I'd rather the devil I know ... The EU Commission is an unelected body, at least Westminster is closer to home.

I think I'll be one of those voters for SNP that doesn't vote for a referendum ... think I'd prefer a referendum on leaving Europe actually!

I mean that doesn't vote for an independent Scotland.

I think that's the challenge for the SNP. I'd vote SNP if I lived up there for a variety of positive reasons right now but I'm sure I'd drop them if independence went through in favour of a (new) party in a fresh political scene which would more suit my views on the EU, on the economy and so on.

And my view would be true independence - not swapping one distant parliament for another one. What's the point in that?

If a job needs doing, might as well do it fully or not bother.

Ah Ranty yes, I read yours after I'd published this. Perhaps you notice that I disagree with you on some points. ;)

I think the matter of the EU has to be discussed alongside independence Belinda. The EU has changed greatly since the SNP composed their policy.

He's every reason to look smug Mark don't you think? Just for a day or two anyway.

If someone fell under a bus ASE I think there would have to be a by-election. However here in Scotland there are always 'top up candidates' owing to the party list system. If No 1 on the list was appointed an MSP in this election, then No 2 would become top. All are suitable candidates.

Lovely song Jeanne and yes, I know you're a Corries fan. Thanks for the links.

You're right Junican because unless that happens we'll never make it with any distinction.

ASE, I think if other parties decided to support independence then quite a few SNP members would move.

Scotland does need a new party. Having three left of centre ones is too much.

I guess it's 'congratulations' or should that be 'windmills' all round.

Divide and conquer. In such a way will a One World Government slither into everyones lives. Scotland is a small Country, the Poll Tax was applied to Scotland's 3m population as a test for the rest of the UK. Sounds like a 'gotchya' to me. Watch for closer relations to Brussels here on in. Oil is the attraction for OWG, as is total power over all.

Are the Scots more gullible than any other race? No, there's just less of them - not that the English or anyone else come to that are doing any better.

How do you eat an Elephant?

One small bite at a time.

PS Did you ever find a Fascinator to your liking Subrosa?

Well the Scots voted for the best of the bunch Derek. I mean, four left wing parties in Scotland? The SNP and Labour vying to be the better, the LibDems hoping to be more left than either of them and the tories running to join the fray and move to the left from their natural right position.

Yes I did find one thanks Stewart and the wedding is very soon. It's quite an insignificant one in comparison with those at the Royal wedding but it matches my outfit instead of looking like an expensive impulsive buy. Thanks for asking.

Excellent. I have every confidence it will not look like certain Royals sporting what appeared to be 'Antennae' in the form of a portcullis! Or was it Rabbit's ears!

Creased us up no end.

Hope Scotland gets a better deal with SNP.

Clever Derek. :) It has done for the past 4 years while the others do nothing but ensure we're tied hard to the south. I've no reason to doubt it will continue although it will be hard at times.