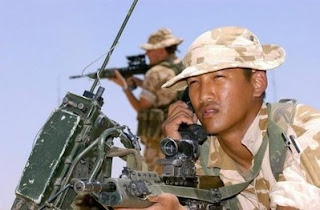 Following the review in October, the MoD said it would reduce the number of military personnel by 17,000 over four years: 7,000 from the army and 5,000 each from the Navy and RAF.

Yesterday the MoD announced the numbers to be cut from Army and Navy personnel: both must lose 5,000 and 3,3000 respectively.  The Gurkhas are to be among the first victims of the Army's redundancy programme with around 150 troops facing the  end of their military careers. Money needs to be saved now that Gurkhas can now serve 22 years rather than the 15 to which they were previously restricted.

The MoD said that 1,000 soldiers had been told they would be redundant by September and 1,600 Royal Navy personnel were informed they too would lose their jobs.  In the Army alone it is expected that around half the redundancies will be compulsory.

The RAF listed its figures a month ago and although yesterday the Air Chief Marshall says forces will be in Libya for at least six months, there would appear to be little sympathy from the MoD or David Cameron.

Why has our involvement in the no-fly zone over Libya suddenly extended to a mid-term operation?  Because Barack Obama has pulled the US military out.  There are other factors of course but some of them have to do with the development of the situation in Libya itself, with others to do with the complicated relations between the US and its Europeans NATO allies.  But what is more important for Obama is that the war in Libya has a direct impact on internal US politics and bears directly on his 2012 prospects.  This week it's expected he will announce he intends to run for a second term.

Some say as time passes there are more and more indications that the Libyan rebels are not fighting for democracy and human rights as they were depicted at the beginning the campaign and intelligence reports advise of flickers about the presence of al-Qaeda and Hezbollah members among the anti-Gaddafi forces.  I'm sure few people in the UK will be surprised at that news.

Obama has a balancing act to do as no one in Washington would be happy to see Al Qaeda or the like taking the upper hand in Libya, yet Washington presently sees the situation as a stalemate and two US warships, of the initial eleven, have already been withdrawn. 90 US jets have ceased operating in Libyan airspace leaving only 143, (two-thirds of the initial warplanes), to impose the no-fly zone.  France and Britain are expected to carry the bulk of the load now the US jets are grounded with other NATO countries contributing in a smaller way, yet we don't have adequate hardware or, if the Air Chief Marshall is to be believed, enough manpower.

Yet David Cameron will continue to chop away and be happy to lose highly skilled military personnel in his quest to 'save' money.  The safety of the people of these islands has no part to play in his plans.  At least we know, but we've known that since Blair proclaimed war on Iraq.
Tweet
Posted by subrosa at 09:03

Subrosa, regardless of our military commitments, the plan is part of a Pan European police and military force creation. Our other responsibilities will be contracted out to private "security" firms such as Reid's. http://www.dailymail.co.uk/news/article-1111702/John-shot-fired-Reids-50-000-Iraq-security-job.html

Many of ours are making plans to get out OR as they can and will gain far greater salaries in civvie street.

Our military will be destroyed in 25 years time.

Hi SR, Its time our rulers got out of their own little world and started living in the real world.Treat the military like mercenaries and they will behave like mercenaries.And if you look at history you will see what happens then, and our rulers could quickly be living a nightmare. And they wont like it one little bit.

Is this not also going to have pretty severe ramifications in terms of incoming soldiers? I always thought one of the reasons one joined the army was because it was seen as a job for life and a vocation.

Are potential recruits really going to take the plunge if there is no longer any job security?

I wouldn't have thought so...

In 1945 in the Bunker the Fuhrer was pushing markers around the board that he assumed were capable forces. They were not they were badly depleted, out of kit and no longer capable of holding out. How long before it is realised in the Whitehall Bunker that our time could soon be up?

Gaddafi - Should he stay or should he go?

Our rulers have always lived in their own worlds Apogee. Why do you think the chances we've had in this country in the past 50 years have been squandered?

Hopefully one day they'll have to face reality.

Pa broon, you'e hit the nail on the head. Out highly qualified military will no longer sign up, even on short contracts, because they can easily acquire larger salaries and pensions in civvie street.

As I say, in another 20-25 years our military will no longer be recognised as one of the best in the world. Mind you, it no longer is now, but once the brains leave then it will be purely a combat organisation.

Believe it or not, in the past many in the military work hard to avoid combat situations and to ensure the personnel have the best the government will buy. Those days have gone.

Our time's up now Detmetrius only it'll won't be publicly recognised for a few years when suddenly the skilled etc are no longer there.

If Al Qaeda is in Libya then they are only there because the US put them there.

Al Qaeda means The Database - The CIA's database controlled and run by them.

The worlds new Big Bogey Man to scare the plebs of the world in order to let the US and UK governments get away with doing what they want and invade any other country they fancy to fight against "terrorism" and for "democracy and freedom".

Don't get conned by the Al Qaeda myth people.

Billy, I don't doubt the CIA are involved with Libya and the other uprisings in the middle east/north Africa.