New Intake, New Principles - As If 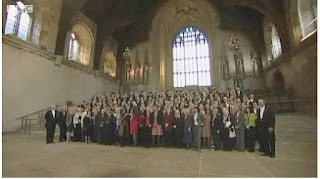 The snapshot is from a BBC video showing the 200+ new MPs elected to Westminster at the 2010 general election.

We all assumed - at least I did with an excessive dod of optimism - that the 30% of new MPs, having given due consideration to the exposure of dubious and the often blatantly fraudulent dealings of some of their new colleagues, would respect the wishes of the people and act as honorable representatives.

However, along with their more 'established' colleagues they have voted to make themselves exempt from tax avoidance.

Section 554E(8) of the Finance Bill specifically exempts members of the House of Commons and the Independent Parliamentary Standards Authority from the new legislation in situations where they are actually caught by it.

According to those 'in the know' there are other examples of MPs having special tax breaks which don't apply to ordinary taxpayers.

“The new rules on disguised remuneration are intended to catch complex arrangements designed to avoid income tax through loans made to executives, typically through offshore structures.
“It is difficult to see why MPs need this specific exemption. After the uproar over their expenses, I can’t believe that our elected representatives would dare to indulge in provocative tax avoidance. So why do they need the legislation to protect them?”
That was said by Mike Warburton of Grant Thornton.  He won't be receiving an ermine cloak anytime soon.

So our latest intake of MPs were more concerned for their inflated salaries than the good of the people.  I do wish I could express myself as well as my co-author articulates about our current representatives.

What has this to do with the Holyrood elections?  Check out how your own MP voted here.

One friend in England has allowed me to publish part of an email conversation we had recently.

"Give them [the coalition] a 5 year term and all they will do is allow this form of deceit to continue for an extra year.  I certainly don't like to accuse my English friends of apathy but their lack of concern makes me say so. What can we do to change things?   England (Westminster) is the core of UK government.  Isn't it time you Scots realised just how subservient you are to UK politics yet you could have a future like Switzerland if you had politicians with enough courage to attain it?"

What can I say.

Maybe I will be vilified as an extremist, SR, but I do firmly believe that we should immediately seek out 650 lamp posts and adorn each one with an MP!

Actually on reflection we may need a few more lamp posts for Welsh AMs and your lot!

We need a wholesale clear-out and a fresh start - with the new intake daily reminded of their predecessors fate!

So many people in the UK, Scots as well as English, probably Welsh and even Irish, just accept that MPs to be corrupt, greedy liars, and seem to have no problem with the fact that our representatives think they are different from the rest of us.

I've tried explaining to colleagues that I consider them to be people that are paid to work for me at Westminster. Just like if I employ someone to put in double glazing, or dig the garden or fix my car.

These people are sent by us to do the job that we can’t all do, because there isn’t room in the chamber. They are not above us, they are of us. They look at me as if I’m a bit mad...

One of the problems of our system is that we have the remnants of the time when the MPs were our betters, Sir this and Sir that; then we add to it the fact that customs haven’t changed at Westminster since Adam was a lad (witness the idiotic little pip squeak of a speaker demanding that the passages be cleared for him and his entourage), they work in a royal palace, which means that the laws of the land do not apply to them (no smoking bans for them).

We all remember the tales of MPs screaming at clerks in the fees office when they dared to query whether something was a legitimate claim; we know too that they demand that they have fist access to the lifts and staff (no, OTHER staff, because THEY are staff too) have to defer to them at all times.

It’s time they got back down to earth.

I like you hoped that this nonsense would pass with the relics of the 19th century leaving... Nicholas Winterton and his foul mouthed bitch of a wife, who felt it was inappropriate for people like them to mix with ordinary people in the 2nd class carriages of a train (but were unwilling to fork out the difference in fare despite the years to stealing they had been doing).

It appears not. I trust then that the Daily Telegraph will up cudgels again and let the self important see that these days are in the past.

A separate Scotland, with our own rules, no more bloody titles and the rest of that nonsense: my dream.

Tris: As one who believes in a United Kingdom - bar your last sentence, I echo all that you wrote!

"Maybe I will be vilified as an extremist, SR, but I do firmly believe that we should immediately seek out 650 lamp posts and adorn each one with an MP!"

I'm intrigued by the "tax avoidance" phrase. In many cases, such as with Ms Blears, it was blatant tax evasion. And that is a criminal offence.

Tax avoidance is what we pay accountants for. And it isn't always illegal.

What this lot are up to is blatant evasion and there should be no protection from that.

The real reason I take an interest in Scottish politics. Some of your politicians are just so darn laughable:

Firing squads all round post peoples tribunal hearings though lamp-posts will do in a pinch a la Mussolini.

WfW, you're no extremist and many will support your view. I'm one of them.

Ropes Jo? You're too thoughtful. I was thinking along the lines of wire.

Jo, it was difficult for me, not finding legal evidence, to call it evasion but of course that's what it is. What will be done about it? Nothing.

It's a good one isn't it Jeanne? Silly, spineless man.

Why hasn't the MSM made more of this David? Do they not wish to rock the boat?

Exactly Doug. They behave like UK plc company directors or one of those businesses based in the Square Mile.

"It is difficult to see why MP's would need this exemption?"

The avoidance ploy issue is one of company high flyers taking their bonuses as shares, therebye avoiding tax on them, while at the same time being awarded a loan by the company to the same value and secured by the shares which because it's a loan is not liable for tax. And when the debtor dies the company retains the shares and writes off the debt. Of course the debtor has all the benefits by way of dividends in the interim.

Now why would the MP's want the same arrangement to apply to them? Could it be because many MPs are on sabbatical from companies who indirectly sponsor them and make the same 'loan' arrangement available while they are representing the electorate?

Thank you for your explanation Crinkly. It now makes sense.

You know the answer to your question I'm sure. :)

Rosa - What better way to control a country than by having elected carpetbaggers looking after the lining of their own pockets. Will that do?

Compare his reaction to Annabel Goldie's. I know she's a Tory but at least she doesn't run from sign carrying grannies.

Yes Crinkly, that will do. Thank you. :)

Aye he is a pathetic figure Jeanne. Unfortunately that won't deter many from voting Labour.