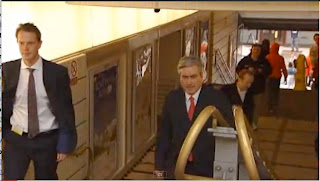 Iain Gray arriving for his photoshoot
It's impossible to ignore the fiasco which took place in Glasgow Central Station (video) yesterday morning when Iain Gray was hijacked by anti-cuts protesters.

He was aiming to highlight Labour's support for reviving the ditched Glasgow Airport Link (GARL).  The proposal was thrown out by the Scottish government because it is unnecessary and far too expensive.

The same group of protesters, calling themselves Citizens United Against Public Service Cuts and who gate-crashed the Tory campaign launch in Portobello last week, decided they would ask Mr Gray's opinion. Ms Goldie discussed the small group's concerns last week but Mr Gray decided talking to the public wasn't in his agenda.

This display by the Labour leader is pitiful and doesn't bode well for a leader whatever their politics may be and his well rehearsed 'speech' after the event is pure spin.  Indeed, he may have been in these countries but after all conflict had ceased.  He was in management when he was employed by Oxfam and would have been heavily guarded in such situations.  The question I would like to ask him is how many lives did his presence save.

These days the public are not encouraged to talk to politicians and much of the campaigning involves stage-managed events. I may disagree or even despise someone's politics, but I respect those who have the sense and conviction to stand their ground and argue the points.

Iain Gray failed dismally yesterday.  One little tip to him - stop touting the 'hero' image. You weren't a volunteer in these situations but a well paid employee.
Tweet
Posted by subrosa at 19:43

Well said and having just posted on this myself, my thoughts exactly.

It was an unexpected opportunity for Gray and he flunked it!

He did indeed flunk it and so did his entourage - you know the ones who are supposed to know better.

One of the worst things a politician can do is show himself to be laughable. Epic Fail for Iain Gray!

Look how Anabelle Goldie handled the same situation. I hope they do target Alex Salmond. The comparison would be golden.

They have to target Alex to have any credibility don't you think Jeanne? They've already done the libdems, tories et Elmer.

This was my moment of the week. I laughed right out loud when it came on the news. It was hilarious! I could not believe they chased him from Central Station concourse, down the steps, into Subway in Union Street and back round the corner into Gordon Street where a taxi played the part of the cavalry.

It couldn't happen anywhere but Glasgow yet this was Labour's main man in Scotland. The best part for me was that Maggie Curran, the wee Glesga hairy herself, was present but was restricted, due to the presence of cameras from behaving as she would have normally. Do no doubt that had cameras been absent she would have set aboot the hecklers and nutted a few!

Subrosa, yes, he went on a bit about warzones eh? All it proves is that nothing compares with Glasgow when someone is browned right off! : )

It brought a smile to my face too Jo and you're right about Mrs Curran. She looked as if she was fair itchin' to have a go at them.

There's nowhere like Glasgow right enough. Mind you he's from the Lothian area of course, no fisty cuffs there. It's all negotiation behind closed doors. :)