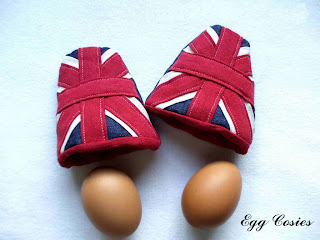 Covent Garden and its market is possibly about as English as it gets to foreigners like me.

However, two weeks before the Royal Wedding - that's 29 April just in case you've been hibernating - a number of traders in the Apple Market area of Covent Garden have been sent a letter ordering them to stop selling merchandise displaying the Union Jack immediately.

The order came after a market official took objection to a handbag which included a flag design.

"They have informed me that the selling of any items displaying the Union Jack is not permitted from the barrows.  Please remove said items immediately."

A spokesperson for Covent Garden London said: "Union Jack products have not been banned from Covent Garden.  The East Colonnade market traders have a clear directive that products sold on their stalls need to be of a high standard, but despite this, low quality products displaying Union Jacks have recently been on sale and it is these items that the traders have been asked to remove.

"We remain happy to support the sale of high quality patriot products in the heart of Covent Garden."

Now I'm rather puzzled here.  Isn't a market somewhere you can buy items of varying qualities?  That's the point of a market for me.  Tourists don't seem to mind a bit of tat: the Royal Mile in Edinburgh is proof of that.  The Scots tolerate it with clenched teeth but it seems it's not good enough for England.

Ah well, that's a few less handbags to be waved at the folks who will appear on Buckingham Palace's balcony once the blowout spectacle is over.  If you are an ardent Royalist why not make your own souvenir(s)?  They could become heirlooms.

Good. sooner the Union Flag is banned completely from England the better.

Well, there is that Wyrd and you know I support your desire for an English parliament. Perhaps you should have a word with these market sellers and suggest goods with the St George flag. :)

I always suspected that you had hidden qualities SR - and you show one of them with your expert use of a wooden spoon, stirring nicely the English/Scotland debate..... (I jest)

Seriously though, this is just flexing of the bureaucrat muscle and the resonse should be Tebbit's famous instruction. If people wish to spend their money on 'Tat' then that is their choice, it is after all their money.

Being a lazy sould, rather than make my own souvenir for the royal highness's wedding, I shall purchase mine. Being the practical sort, I shall wear it too.Like it?

I read that article in the Evening Standard on my way home from work. The lesser stall holders suspect that the owners of Covent Garden want to put those cheaper stall out of business, to bring in a better 'class' of stall holder, and they think this is the way to do it.
We are infrequent but happy visitors to Covent gardens and I, personally, have no problem with those types of goods being sold in the market.

As soneone who did a shift or two in the real Covent Garden in the 50's and who wanders up there now and again I have to say there is not much that is "English" or "British" about it now. It is just a very expensive third rate shopping area for tourists with the usual sort of food outlets and a few stalls. The tube station is best avoided.

"Ah well, that's a few less handbags to be waved at the folks who will appear on Buckingham Palace's balcony once the *blowout* ...... is over."

You found something English in London?? Try and find a Pie and Mash shop!

The Transport Museum's the only thing worth looking in, or try getting into the New Covent Garden over in Nine Elms - watch out for formula 1 fork lift drivers and artics (that's assuming they allow outsiders in.)

Those egg cosies are an abomination of the Union flag. The two finger sticker - still available from motoring shops I believe. Not that I'm much of a flag waver. Until they say I musn't - then I will.

Derek,
There is a fairly good pie and mash shop in Shepherds Bush. Not into them myself, though.

I entirely agree with you on both points WfW. :)

Love it Tris. :) Cheap at twice the price even though it falls apart during its first wash.

Oh I'm sure you could manage the royal family JRB. It's all 'plain' knitting, nothing fancy except the cost of the wool. :)

Demetrius, I haven't been for years, not since the fruit market closed. Such a shame the aura has been lost because it was wonderful in those days.

I read that bit too Gedguy and there may be some truth in it. Since I wrote this a London based friend said it's very possible.

Markets are all about variety, quality and price so I don't have a problem either.

Derek, I'm speaking about back in the 60s and 70s. That's when I worked in London.

There's Gedguy answering your comment Derek. You'll have to go and try it.

TAT! TAT!, how dare they call any manifestation of the 'Jack' TAT!, that patriotic but otherwise hard up stall holders may go for bulk bought, chinese made,sweat shop items in these times of austerity cutbacks merely shows their true entrepreneurial spirit is still trying to come to the fore, especially in a world where a mere 200 yds away you can sate your hearts desires for TAT on a grand scale!
They are obviously trying to drive these poor stall holders out so they can let some more of their cruddy pseudo antique dealing mates in, I blame the government for this...but then I blame the government for everything!

I haven't seen the said handbags suedenimon but we all have different tastes. We manufacture little in this country these days so yes, the stall holders need to be applauded for finding items which they know will sell.

The UK government has a lot to answer for, believe me.