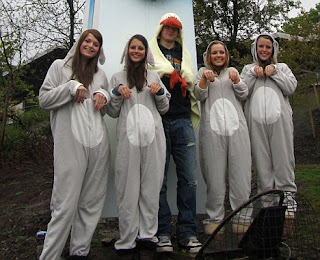 Last week a friend telephoned me to tell me what had happened to her 15 year old neighbour's daughter.

Laura Gibson (on the left of the photograph) is suffering from cancer.  She was diagnosed with Hodgkin's lymphoma in March and is being treated at Edinburgh's Sick  Children's Hospital.

Her friends decided a special treat for her over the Easter weekend and one of the mothers spent hours making 'bunny' costumes.  Laura's brother decided to go as a chicken - although from the photograph he didn't look too comfortable.

When the group arrived at Edinburgh Zoo to spend their money, they were told that they had to remove their costumes because, "There is very real evidence that humans in costume can cause distress to some of the zoo animals.

"This is particularly the case with our chimpanzees who get very anxious and disturbed.

"When we have our own costumed characters on-site, we ensure they're away from the animal enclosures."

So Edinburgh Zoo have costumed characters milling around yet they were unable to ask the group not to approach the chimpanzees in particular.  What is happening in this country?  Would these people be allowed admission? 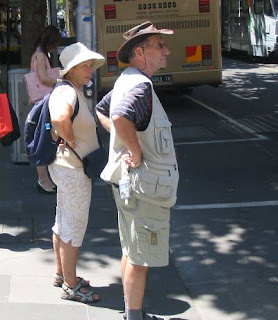 They look in costume to me.  I never wear shorts and I'm sure Edinburgh Zoo animals would be utterly psychologically damaged if they had the slightest glimpse of me flouting shorts such as these visitors.

The Zoo management should get their act together and stop their animals dictating what visitors wear.  After all they pay good money to keep them in business.  I won't be advising anyone to visit the place this year or any future year and I will be suggesting they boycott it until the management show some common sense.

The group of bunnies and their chicken decided to go bowling rather than submit to the Zoo's ridiculous demand. How sensible. Depending on their ages entry prices for children 3 - 15 is £11 and adults £15.50.  If all the group were 15 or under then the zoo missed out on entry fees of £66. Bowling would have been a great deal less expensive and much more fun - especially as there was no attempt to infer that others would be mentally damaged by their costumes.

May I wish Laura all the best during and after her treatment.

Flaunting shorts, surely. Flouting shorts would even scare the lions.

How are the animals supposed to distinguish between people in silly costumes and everyday Scots?

I find it difficult myself at times.

"There is very real evidence that humans in costume can cause distress to some of the zoo animals."

Whereas being kept in small cages, and being peered at everyday by humans not in costume doesn't cause any distress to any animals. Right.

Sorry Brian, I will amend it immediately. :)

On second thoughts Brian, I'll leave it as flaunting. ;)

You'd recognise me in my tartan nightie Dick. Not sure the monkeys would.

Great PR from a place which relies upon entry fees for their very existence Joe isn't it.

Best wishes to you Laura - like the outfit bunny girl!

Illegitimi non carborundum as we boring non bunnies would say.

I've never been to Edinburgh Zoo and I'm not likely to. Not interested.

Good luck to the girl though. My neice went through leukaemia treatment and has recently been declared clear. Having all your hair fall out when you're 16 is pretty traumatic, apart from anything else.

Fortunately it's grown back now.

I notice these PR mouthpieces always just state that there is evidence and expect never to be challenged on it...

Part 1 of 2 posts, as Blogger doesn't want to accept the length, despite being just within character limits:

Having worked in two Zoos as Keeper, and having family members who have managed and run same, the greatest danger to animals as Gerald Durrell once wrote, is from the members of the public. "70% of a keepers time is spent protecting the animals from the public". Not in what they wear of course - that is largely utter nonsense, though may carry some credence as certain animals are disturbed by large hats – but more in what they do with stones, sticks, and other unsuitable actions like banging on glass partitions in an attempt to get some species to move, or perform in some fashion or other. As has been alluded to, most of the psychological damage has been done, and continues to be done by being held in captivity.

There is also a claim that is often made that Zoos help protect and are able to re-introduce to the wild some endangered species. This may hold true for a very few creatures, but in the main such creatures are best protected and bred IN the wild, not in some unnatural environment to that from which they came. Another angle on that, is would the local people of India and elsewhere welcome increased numbers of Tigers in their neighbourhood? Would the Scots welcome a re-introduction of the Wolf and the Brown bear to the Highlands? For such ideas have been mooted. The Wolf would be hunted and shot illegally – as are certain birds of prey, which deplete the Grouse stocks, and more would succumb to road traffic accidents. Already there have been many voices from the 'ramblers' quarter complaining of aggressive Deer in the rutting season, wanting them 'banned' or fenced off. Who was there first?

We had Chimps at London who would begin to screech and scream, running back and forth in their outside den on days when public numbers were high – Bank holidays were favourite. This inevitably drew a crowd who would follow the Chimps behaviour of clapping its hands and in doing so create an even greater attraction. As the crowds became many people deep, and small children were lifted onto their parents shoulders for a better view, the lead Chimp would scoop up a handful of fresh faeces and with a deft swing of the arm, spread the content at force through the bars in a wide arc, covering quite a large number of people. If you have ever smelt Monkey poo, you will never forget it. The whole was a regular occurrence, and was often watched by certain keepers still in dungarees at a distance (of course). No amount of warning the public had any effect.

Caesar the Lion was another case in hand. He would begin to roar, a deep reverberating roar you could hear right across Regent's Park. Again, this drew the crowds, only to have him turn his back on the audience and spray urine in an almost horizontal stream some twelve or fifteen feet into the crowd, waving his bum around for maximum effect. This was made further effective by his outside enclosure being placed at a level four feet off the ground from the public area. The smell of Tom Cat is well known.

But Zoos in general, little more than Circuses, entertainment for the mindless. With regard to my family member who became director of the Highland Wildlife Park just outside Kingussie, and who helped build the concept of indigenous animals to the region in open spaces with minimal signage to distract yet to inform, all this was spoilt by Edinburgh Zoo's policies when they took over from the original syndicate of Lairds who had financed the founding in the early seventies, and which caused my Brother-in-law to resign in disgust. It is today a far cry from its original concept. We don't go there anymore.

They say of Dudley Zoo that the big feences aren't to keep the lions and tigers in but the locals out - considerably more dangerous. ;)

Health & Safety or any other nonsense like this is just pathetic drivel. Good grief.

The days of zoos are surely numbered or if not they should be. Who finds looking at animals stuck in a cage or a concrete facsimile of something a good thing to do? The breeding thing is nonsense also. Let's get real here.

Firstly, let's make sure that all humans have the opportunity to live their lives to the fullest for the longest time possible. Secondly, once we've sorted out ourselves then maybe we could find a reasonable balance for nature.

These job worths are ordinary, normal people. We live beside them. They go to work and become hectoring, snide and arrogant.

What does a chimpanzee do when it sees a penguin?

Glad to hear your niece is fine now. Cancer in young folk is far more common than we think.

Julia, I doubt if these youngsters could be bothered, they just wanted a fun day out.

I'd have told the jobsworth a few home truths though.

I can understand why the old ladies were attracted by the Brown Bear. ;)

Like LI I've no interest in zoos perhaps because I feel the captivity is cruel.

Thanks for the video too.

Brian, what good are zoos other than money generators?

I think many will agree with you petern, I certainly do.