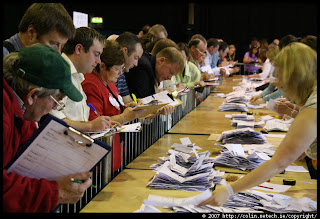 On Monday Westminster MPs voted, by 298 to 206, against overnight Scottish election counts.  Labour had put forward an amendment to the Scotland Bill to protect traditional overnight counts, which always start as soon as possible after polling stations close, at Holyrood elections. The amendment would not have applied to this year's Scottish elections.

This paves the way in the future for returning officers to refuse to start the count until the following day.  Election officers have been highly vocal on this subject and their excuse concerning this year's count is that staff would be too tired on 5 May to count the AV Referendum votes after the Parliament ballot papers.  That doesn't hold water, because returning officers know full well all they have to do is employ two teams of staff; one for the Holyrood elections and one for the referendum.  There would be no extra costs and certainly there would be no lack of applicants.

Last month it was reported the UK government were willing to put an amendment to the Parliamentary Voting System and Constituencies Bill to ensure that counting takes place as soon as voting closes on 5 May.  I've scanned the Bill and find nothing of relevance.

Scotland ought to be able to make its own legislation covering the timing of our election counts, not Westminster and the Scotland Office should be facilitating the correction of this inconsistency.  It would appear our tradition of overnight counting will continue this May, but to ensure it is so in future years, our politicians need to address the matter now.  We're adult enough to make our own decisions with regard to our own elections, aren't we?

All is not lost though as far as our masters are concerned.  They're sure we'll be delighted with the ballot papers' tasteful colours; lilac for the constituency vote and peach for the regional list vote, while the AV paper will be light grey. For non-Scots readers our constituency vote is cast on the FPTP system while the regional list is the AV system, so Scots (possibly) have a slightly better understanding of AV than most.

The first results are expected much later this year at around 5am because papers for all three elections have to be verified before the counting can begin and the calculations for the regional lists can't start until all the constituency winners in a particular region are known.

Not much fun to be had for political pundits unless they enjoy watching highly paid television presenters mumble and stumble their way through the night making nonsensical small talk with hopefuls.  For me it will be bed at the usual time.

SR, as I understand it –

In most Scottish regions, the vast majority of those who count the vote are volunteer council staff.

Yes, they receive a nominal fee for their efforts, but it is not large.

On election night, those volunteers who have already worked a full day for the council are allowed a meal break before they begin working through the night, counting the votes.

In the past, having worked a day and a night these volunteers were allowed the next day off.

In these austere times local councils feel they can no longer afford to give such staff a day off. They are now expected to work all day, count through the night then work the following day.

Naturally the numbers volunteering for the forthcoming elections has dropped dramatically.
To safeguard future elections, something has to be done, if that is primary legislation, so be it.

Surely JBR the count doesn’t begin till after 10 pm, so the counting staff must necessarily be allowed quite a lot more than a meal break if they finish their normal work at 5 pm.

Also I cannot see why the staff couldn’t have the next say off. It isn’t actually going to cost any more. It may mean slightly less efficiency, but no more cost. And people who have been working all night won’t be efficient anyway.

There is probably a health and safety regulation (as rightly there should be) about someone working that length of time without a proper sleep break.

There should be no reason why other people can’t do the work. There are about 7 million unemployed in one way or another. One night’s work, without affecting benefits, would be welcome for many people who have been made redundant by the bankers’ greed and stupidity and government inefficiency.

Half the fun of the election for many people is lying awake watching the tv or listening to the radio and hearing the results.

And they moan and moan about the West Lothian question and how it affects them! Pffffffffffff.

You’re dead right SR. Our elections would be our affair. We don’t need someone else telling us whether we are allowed to stay up late on a Thursday night. In America the individual states are in charge of their own election policies. Of course they are a grown up country despite their relatively short history. Whereas the UK......

Not all are council staff JRB, some are from the NHS and other public bodies (at least here they are). There's nothing in law which states any other person cannot be employed though.

The fee's fairly good as far as I remember. It's not peanuts,or wasn't when I last looked.

It's not compulsory to do it, they choose to do it and I know there's quite a queue for the job - hence the reason staff from 'outside' are never employed.

Many who man the polls here are people who are shift workers such as NHS staff and SS staff. They can allocated their day off to suit. I can't see why they can't book one day's annual leave if they feel they need it.

As in the SNP's proposed amendment to the Scotland Bill on air gun regulation - when Labour voted against it - this is all about Westminster stamping its authority on the pretendy upstarts north of the border.

We shouldn't be surprised; it's the way of tyrants whether they be individuals or institutions once they feel secure by the creation of the womb of apathy.

In real terms, whether the results are known immediately or days after is largely an irrelevance; the real issue is one of trust, or rather lack of it. Based on the underlying concern that voting papers stored are votes manipulated.

By the very fact that this concern has crept into the public conscience is a damning indictment of the sham democracy as practised by Westminster.

Well, I would actually have welcomed it if this had been in place this year, because I'm going to be offshore until the 6th (better get my proxy or postal vote sorted out), so I would have wlecomed the opportunity to come home just as the first results started appearing.

I wonder if we'll have a similar scenario to last time round, when delays to islands counts meant we didn't find out the winner until about 5pm on Friday anyway. If that was to be a common occurance, then it kind of makes a mockery of overnight counts anyway.

Why can't we have a bank holiday after an election? That way we could all (well, most of us) sit up as long as we liked and not have to worry about work the next day. I was thinking of taking the 6th off anyway (not now, obviously).

why did westminster make this rule?cos they can and we cannot.

It's just another skirmish along the road to buying a pile of expensive electronic counting machines.

That's the price the whole country will have to pay for using a hatful of different voting systems including AV sooner or later (no wonder the manufacturers are financially backing the Yes campaign).

It's going to be painted as the only realistic way out of the cost/time/effort in this post.

Call me paranoid, but I think unless security is very tight around the boxes then vote tampering/fraud could go through the roof.

Also as others have pointed out, I don't see what business it is of the UK government to tell Scotland how to count their votes.

Was there not a comment by an observer after a previous election that the elections in some third world countries were better conducted?

Quiet Man is right. What happened to the marked electoral register for the Glenrothes By-Election?

As a supporter of an English Parliament I agree with Brian there.

But the dividing line should surely be where the votes are for? If casting my ballot for the Parliament in Scotland then the timing of the counts, the colour of the ballots and everything else should be an issue for Scotland. If I'm electing to Westminster then I'd expect those rules to be made there instead.

If Scotland decided to count on the night and Westminster the following day - or vice versa, they should make those decisions and fund them accordingly? Coordinating would be sensible but they can't agree then so what?

That's it Crinkly and Westminster couldn't deny it was a decision to ensure we remember who's boss.

Itt could be Doug, that the islands hold the balance of power as last time. So I'm told be an islander anyway.

Now there's an idea. Instead of 1st May make it the first Friday.

Exactly hector and the same with them bringing down the air gun proposal.

We're having manual counting this year ASE because the machines caused lots of problems last time. But I see what you mean and wouldn't be surprised if they're introduced next time round.

Even in this county QM boxes have to travel over 30 miles to get to the count. Plenty room for tampering really.

I think that was someone from the UN or somewhere Apogee.

We'll never know what happened Brian. Certainly no one appeared to be accountable.

ASE, can't have these Scots taking charge of their own election affairs. Goodness me, they're far too stupid to do that.

Of course it's not that, it's just in case a few voters stray towards wanting to behave like a country and they vote SNP.