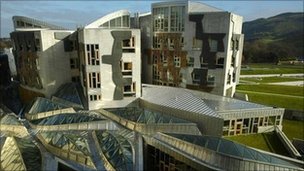 Midnight next Tuesday sees the dissolution of the Scottish Parliament's third session.  It's doesn't seem so long ago - a more 14 years - since there was great excitement about the referendum; then there was much puffing and puffing concerning the location of our new Parliament.  Donald Dewar decided a small site at the foot of the Royal Mile would suffice.  S & N had just closed their old Holyrood brewery and a deal for the land was struck.  Immediately the old building was reduced to rubble in readiness for a magnificent structure which would proclaim our ability to govern ourselves - I can but dream.

This post isn't about the architecture of the building as I've previously stated my opinion, but it concerns RMJM, the Scottish company connected with the architectural design.  It's well known they made a handsome profit, regardless of their numerous errors and they would have received many future commissions on the back of their prestigious Parliament contract.

However, all is not well at RMJM.  The company is seriously in debt and the Morrison family is to inject £8 million of its own cash in an attempt to stave off its creditors.

There's nothing unusual about a company having financial difficulties during the current economic situation and there's nothing unusual in such large companies employing those experienced in the finance sector.  RMJM employed such a person until recently but he will remain nameless because he's an enthusiastic supporter of super-injunctions. Therefore I will follow the example of this erudite journalist and call him The Man.  Let me make it quite clear: I am not inferring The Man had anything to do with the problems now befallen RMJM while he was employed there.  I'm sure he carried out his duties to the best of his abilities even though they weren't quite good enough to stop a major bank, of which he was the incumbent CEO, requiring a massive injection of taxpayers' money.

This man sounds like a complete *anker to me!

Think he was an *anker-chief Jim.