A Much Loved Old Bird 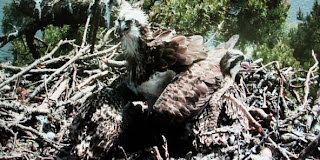 courtesy of the Courier
You didn't have to be a bird watcher or even a nature lover to be caught up in the excitement in this part of Scotland on Monday.  At the Loch of the Lowes Wildlife Reserve, run by the Scottish Wildlife Trust, the main attraction is a pair of breeding ospreys; not just any old ospreys but one very special female specimen.

On Monday, because of webcam problems and the fact the 'resident' female osprey is not ringed, the identity of a newly arrived osprey couldn't be made until the bird's identity was studied by a close-up image of its iris.

Amazingly it was the return of Lady, thought to be the oldest breeding female of its kind every recorded in the UK.  This is the 21st consecutive year the bird has returned to the nest in Perthshire after a 3000-mile migration from West Africa.

According to the SWT the average osprey lifespan is eight years and this bird is now around 26.  She has laid 58 eggs in her lifetime with 48 chicks going on to hatch and successfully fledge the nest and she has made a significant contribution to boosting osprey numbers in Scotland.

Many local people voluntarily contribute to caring for this special reserve which is a few miles east of Dunkeld.  People come from all over the world to watch these fascinating birds and in recent years the presence of Lady has brought a surplus of visitor numbers; so much so that there is talk about rationing the time people spend in the hides.

The next exciting event will be the return of a male which is expected to happen within the next week.  According to one of the rangers: "The big question on everyone's lips is whether our old osprey will be fertile enough to breed again this year".

Whether she does breed or not is immaterial to some avid osprey watchers who would be quite happy to see Lady spend her well-earned retirement in the peaceful  surroundings of the loch.  Last year Lady was ill for several days and there was great anxiety in the bird world that she wouldn't survive.  However, without any human assistance, she recovered much to the joy of her fans throughout the world.

The webcam can be viewed here.

Labels: Loch of the Lowes, RWT

Nature, the redeemer of human kind.

Aye OR. I bet you thought this post was about some ageing wifey. :)

Subrosa
A much loved old bird

You scared the living daylights out of me. I thought it was an obit!

Tris, I'm laughing. It was only when I saw it published this morning I realised the ambiguity of the title.

That's a thought. Perhaps I should write my obit and then one of my co-authors could publish it when appropriate. :)

I wonder if it isn't about time biologists reconsidered the 'average age' given for so many wild creatures...

“A much loved old bird”

No ambiguity at all – you are both much loved old birds. :)

Isn’t nature wonderful. However I wonder if after only 26years she is entitled to an osprey pension just yet, no doubt the ConDems will insist she keeps on laying for a few years more. :)

They make much of them in the Gambia.

Personally I envy the old bird her freedom -I've just had my water bill in and seemingly I now spend more on water than I do on the malts!

Time for a new perspective - and for anybody up north arguing for Scottish Water to be privatised think about the £840 their charging down here for a couple in their dotage who only have baths when we need them?

After 48 chicks, I'd have thought they would the avian-equivalent of sh@gged-out (as Ospreys are monogamous).

Auch John, you're too kind. I popped over to see her earlier. it was heavy rain and I thought few folk would be around, but I had to wait in a long queue to get into the hide. People there today from all over the UK. Some of them serious twitchers and others just curious, like me.

Jings Crinkly, that's a lot of money for water. As you know ours is included with the council tax bill. I don't know anyone who believes SW should be privatised, although the commercial side of it has been hived off.

Today they were wondering if her male would return Joe. He's due this or next week.

The internet has been a boon to bird enthusiasts Julia because many books are out of date. This bird has its own blog now. Who would have ever thought that.