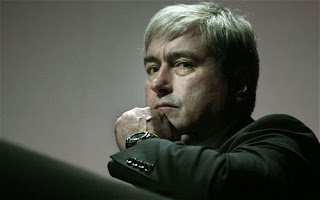 "If I am First Minister, a Labour government will not introduce any upfront fees or graduate contribution for access to higher education in the lifetime of the next Parliament.  There will be no price tag on education".  So says the Gray man pictured above.

He also announced that letters are being sent to 100,000 students across the country broadcasting his policy and the National Union of Students are to hold a jamboree to celebrate the "great news".

Charlie Kennedy, the newly re-elected rector of Glasgow University, accused the SNP and Labour of becoming embroiled in a "Dutch auction" to offer students the most money for their votes ahead of the election.  He, more than most, should know that it's not necessary to keep your word to the student population; keeping them convinced until 6 May is suffice.  Surely he learned something from his boss Nick Clegg.

The SNP have constantly stuck to their commitment that access to higher education should be based on the ability to learn, not the ability to pay and until today Iain Gray has regularly stated a graduate contribution was "inevitable".

Labour really have no scruples and surely our students will now realise they have no policies either.

Let's not forget, Labour are the party which voted against the Scottish budget and by taking that stance they voted against the council tax freeze, 25,000 modern apprenticeships, maintaining police officer numbers and a £2.5 billion infrastructure investment programme in health, education and transport.

"It is obvious it is not a Labour budget - it balances and doesn't add another £200 billion to national debt". source

"The danger is it sends out the wrong signal and we will lose some of our more thoughtful voters." source

Gray is becoming reckless in his desperation to become First Minister.  Once the campaign officially begins I wonder how many other U-turns he will attempt.

Update:  Ed Balls has been speaking to the Scotsman.  For your amusement a brief excerpt:   "The issue in politics and when it comes to the ballot box is who do voters think will speak up for them and their families, for their town, for their country. In those election tests, Iain Gray has won and Alex Salmond has lost."

Labour are clearly very worried when they have to go to the lengths of actually making a policy statement on student funding then writing to students to make it known.

The lefties that run the students representative bodies will be pleased and hoping that it will stop the haemorrhage of votes to the SNP.

Snag for them though is that students will realise that it will only last the "lifetime of the next parliament" which means that Labour still do intend to charge students in the future.

Are you sure you read that in the Scotsman and not in the Daily Delusional ... oh, wait a minute.

A word of warning to Mr Gray, seeker of invisbility, - does he realise that if he makes many more U-turns, that he might well achieve his ambition?

Mr Gray makes this ‘lucky gypsy bargain’ offer to students because he believes(?) the shortfall in university funding is only a mere £93million.

The universities themselves insist that the shortfall will in fact be in the order of £202million.

No doubt the truth lies somewhere between.

Either way, where is Mr Gray going to come up with –
(a) A sum of £93million, or
(b) A sum somewhere between £93million and £202million.
Does Mr Gray have a bottomless pot of money, which he is keeping in reserve just to cover such outlandish promises?

It is a sad reflection, that in his lust for power, Mr Gray will put at risk the education of a generation of Scots children, by making promises that he must know he cannot fulfil.

Professor Ian Diamond, principal of Aberdeen University, said of Mr Gray’s £93million ‘guestimate’ –
“This seems a very low figure when you look at the evidence from England and the very robust and detailed work of the expert group... If the funding gap is not closed, we’re going to have to reduce the quality of education we offer or we’re going to have to reduce the number of students.”

Things like this make me think that parties shouldn't be asked about election policies until their manifestos are written, so they can't then steal ideas from each other as their ideas are written down in black and white. Otherwise, we get situations like last May, where there was naff all to differentiate between the three London parties.

How is this being funded?

Its a very cynical move; 'for the life time of the next parliament' knowing that higher education is likely not to last longer than the parlimentary session, five years is it now?

At least the SNP are being honest and saying university education is going to cost something.

Unfortunately, the labour party are very active (with student unions being run by future labour 'researchers' 'hacks' then MP's and MSP's) so this kind of move might gain some momentum among students.

Meanwhile in the real world.

While I can understand the ambitions of budding political aspirants to get on to the gravy train of Labours hegemony.

It's beyond the comprehension of my belief that any sentient being with the normal quota of braincells would find any purpose to voting Labour other than the self interest motive mentioned above.

Confused - how is that Scotland can afford to fund further education and prescriptions, whereas as suckers here in England pay through the nose for these things.

How is that done?

Oh we still pay through the nose up this way. Our economies of scale are just far smaller, not sure what that means, it sounds intelligent though. We are only 9% of the UK population, it seems the more people you have the more infrastructure you need and with the way government (local and central) runs, the more stuff they have to look after the more money they manage to waste.

You would've thought, if you have your population mainly in one place (not spread out as in Scotland) it would be cheaper to do things.

Elby the Beserk - We in Scotland are awash with electricity, gas and petrol yet we pay through the nose for it and give the rest away for free.

Of corse we have to forget that Labour also tried to bully the IMF into downplaying their debt and shambolic handling of the economy and as some people have already said who in their right mind wants idiots like these back in government.

Isn't it weird how Labour think that by refusing to acknowledge a reality it some how removes it from existence.

In no other walk of life are you allowed to get away with that notion. That we all allow it to go on is also a bit odd, I'm voicing my dissent in May with a vote for the SNP, atleast they accept PFI is poor value for tax payers money and are prepared to say so.

Very true M, a distinct panic reaction. Most students will have enough sense to see past the U bend as you say.

Clarinda, I'm doing my best to be objective. It's hard at times. :)

It's not that he cannot fulfil his promises JRB it's because he has no intention of fulfilling them. This U-turn is posturing and nothing more.

The figures are guestimates where ever their source.

I'd entirely agree with you Doug about waiting for manifestos.

What percentage of students belong to a union pa broon? I've no idea.

Aye Sandy, so it is. I get them free being old but it would certainly have helped me when I was younger.

Crinkly, I think some people join to learn the skills of skullduggery. Isn't that Labour's forte?

Because the majority of people asked for it Elby that's why. We are willing to forgo spending in other areas in order to make it easier for the majority.

England proves your point pa broon. London, with its concentration of the population, needs more public money to function.

Labour are also for reintroducing the practice of using prescription charges as a source of revenue.

Thanks for the link Niko. Isn't your party just miraculous?

I have to admit I wasn't for free prescriptions initially Jo, but having spoken to the owner of my local chemist (with quite a few branches), I now understand the expense of policing and administering scripts. We'll not lose much with free scripts although doctors have to be careful.

Thanks for all the responses. Lots of people here would love free prescriptions, free old age care and no tuition fees for our kids, but there is no-one listening to us. At all.

Time you did something about it down there Elby and stopped your representatives walking all over you.