How Wrong I Was About David Cameron 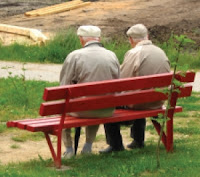 For a couple of months now George Osborne and his band of merry men and women have been happy to leak information about a new flat rate state pension.

According to the government, the new pensions system should make pension planning easier to understand - stripping out the current complex means-tested payments system.  The basic state pension will see the introduction of one universal payment of £140 a week.

The Chancellor, in his Budget statement, confirmed the policy however he pointed out that the new scheme would not apply to the millions of people already being paid a state pension.  What happens to current pensioners is impossible to find in any size of print, so I suspect it's not a pleasant outcome and sees today's pensioners stuck in the complex means-tested system the coalition wish to abort.  With this in mind it perfectly possible two systems of state pension payments will operate for some years, until all current pensioners die.  There is to be a consultation by the DWP starting shortly and further details will be made public in the coming months.

Presently pensioners 60-79 receive a one off winter fuel payment of £250 and those 80 or older receive £400.  This payment is very gratefully received, particularly since fuel bills for the past two winters were much higher than previous years due to the severe weather.  The payment is especially important to the elderly who live in Scotland where the temperature stayed below freezing for weeks on end.

However, George Osborne secretly cut it in Wednesday's Budget although the information didn't form part of the 100+ page Budget document.  The rate has now reverted to £200 and £300, cutting £50 from the 60-79 group and £100 from the over 80s and all done without a pen hitting paper or a finger hitting a keyboard.

The DWP said the measure was not mentioned in the Budget because it was only ever meant as an extension.  Only if it had been extended to winter 2011/12 would it have been announced.


If you remember during the general election campaign David Cameron insisted, on the many occasions he was questioned, that the winter fuel payment would not be changed. He also pledged to have an open and transparent government.
Secretly cutting the help pensioners receive to pay winter fuel bills and slipping the fact that today's pensioners won't benefit from the new flat rate into his Budget speech, are underhand tactics reminiscent of Labour days.  I wasn't expecting too much from this coalition, but I thought they would, at the very least, honour the winter fuel payment for the term of their government.
Nobody likes to be told lies and pensioners detest being patronised.

How wrong I was about David Cameron.
Tweet
Posted by subrosa at 09:05

The truly cynical would think that this is a long-term strategy to reduce pension payouts, by more-rapidly reducing the number of claimants.

While noting that I think he's better than the alternative would have been, I think Cameron and many of his ministers are falling well short of what I'd hoped for.

I can accept that they're stuck with no money and are trying to make ends meet, but they could at least be open about the scale of the problem and what they're doing to fix it. I had enough of "nanny knows best" with the last lot.

It would appear that pre-election promises, or indeed manifesto promises, count for not a jot if you are a Conservative or LibDem.

Least of all when it comes to those promises effecting citizens of pensionable age.

Once again the Conservatives are emerging in their true colours. If you are on benefits, or are disabled, or receiving a pension, then you are nothing but an inconvenient burden on society, and will be treated accordingly.

God help us all.

Cameron and Clegg are a pair of chancers in thrall to their Mandarins and their sense of entitlement. Note how money is found to bomb Libya and line MPs pockets with bribes but fuck all for the rest of us. Booze, fuel, energy cost spiralling ever upwards, whilst Hoon Huhne plays his green painted violin. Shameful and worthy imitators of all we hated so vehemently about the Labour Government. Dear Lord we need a revolution.

Using a twist on an old saying; "if you are not against them you are FOR them", his time in "opposition" should have made Commyrons true colours more than apparant.

My Father always said: "Politicians promise the Earth, and give you stale bread." That was in 1955. That the bread would have come from the Earth is the only 'promise' to have been fulfilled, but you wouldn't eat it.

Liars and thieves the lot of them. Deceivers and debauchers every one. Their gains are personal, constituents the base for their cake.

Now what would you call somebody who apathetically accepts instructions from a hypocritical mugger intent on robbing them?

"... until all current pensioners die."

As Joe Public points out, the removal of the fuel allowance is likely to hasten that end!

Here's a thought. If the wife in a marraige is collecting her current pension (at 60) what will happen when the husband is 65?

Another thought - what an opportunity for the SNP to add they will make-up the short fall to their manifesto?

Answer to my first comment - a Scot who supports the Union.

Dave, it's not our fault they have no money it's their fault. Politicians, away from the public gaze, are in many cases good friends. Westminster is a club.

We only changed the colour of ties they wear at the GE.

I've never felt more detached from government as I do now JRB and I'd agree pensioners are an inconvenient burden. If only Cameron was smart enough to realise he's ignoring the most intelligent section of society. We could be put to good use but they don't recognise that.

OR, I'm sorry your party has become what it has, especially after all your work. Yes, we do need a revolution but we're now a police state and people are afraid to show any form of protest.

I didn't expect much change Furor, but I did expect some honesty. Foolish woman I am.

I don't know the solution Derek. Part of it is that we elect folk we don't even know and although many will say their policies are in their manifestos, we know they're not worth the paper they are printed on these days.

I've several answers in mind Crinkly but the most polite is fool.

The £50 will make a big difference to many I know Julia. It could be the difference between having a hot meal and not.

The couple allowance at present is £156.15 Rob and the single person's allowance £97.65. So if you're married you're treated as less then two people. No other country in Europe does that.

Now that's a thought Crinkly. How many know this has happened though? There was next to nothing in the MSM.

I shouldn't think you were Niko. There's little difference between your bunch and this one where honesty is concerned.