An Exuberant Chronicle of Government and Corruption 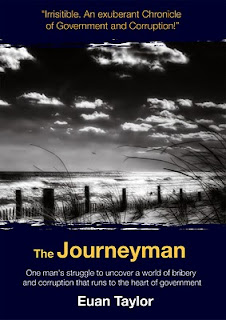 There are times when a blogger is overcome by some people's generosity and this is one of them for me.  Euan Taylor has offered me the publication rights -  under the author's copyright - of The Journeyman which he wrote some years ago and I was delighted to accept: if the truth be told I snapped his hand off.   With Euan's agreement I've decided to publish it as a series, in chapters, and the first will be published this Sunday evening at 7pm when I do hope you will enjoy this tale of 'one man's struggle to uncover a world of bribery and corruption that runs to the heart of government'.

Can not wait to read the story

Better start than the one I'm reading now. Let's hope the rest lives up to its promise:o)

Sunday evenings around 7pm you can read it Caratacus. I haven't read much of it myself so I'm looking forward to it.

Thank you John. Sundays or anytime you like thereafter before the next episode.

I do hope you enjoy it Jacobite.

Thank goodness for archives if you're just starting to read another now McGonagall. :)

I can concur after my little sojourn into Westmidden & Whitehall last week. Corrupt to the f*ckin core to this very day.

I am awakened, I hope it's not much longer until the rest of the dis-United Kingdom see what's truly going on.....

The politicians are lying to you and me and it's all done by statutes.

I predict a riot

Thanks for your insightfulness Daisy. When will we waken up?

Now we're at war with Libya. What next?