The Costs of Public Service 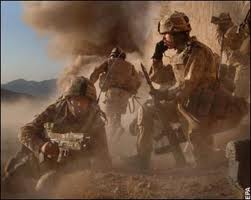 Yesterday I watched the emotional scenes at Wootton Bassett where L/Cpl Liam Tasker's body was slowly driven down the main street while family and friends paid their last respects to him.  I understand his faithful dog, having died a few hours after its master, was also returned to the UK in the same aircraft.

To compound the sorrow the MoD announced the death of another soldier - this time from the 1st Battalion The Royal Irish Regiment - who was killed in the Nad 'Ali district of Helmand on Wednesday when his vehicle hit a roadside bomb.  To date we have now lost 259 of our armed forces.

What a hellish price our military are paying to secure crucial gas pipelines running through this unforgiving country.  Now that Libya is in turmoil, the West will be more determined than ever to secure financial control on their energy supply industry, so there is little hope of our troops returning home by 2015 as David Cameron previously suggested.  The decision to reduce their numbers will not change but our soldiers appear to be in this war for the long term with the new 7,710 foot long runway at Bastion and the ATC tower now completed, making the likelihood that the movement of troops and supplies safer and faster.  These planes, costing the taxpayer a mere £389 million, won't be landing on the new tarmac.

Meantime, headteachers, doctors, top civil servants and police chiefs joined forces with major trade unions yesterday to present a united front against changes to public-sector pensions. Our armed forces are not permitted a voice.  Whilst I have no problem in public servants protesting against the Hutton proposals, our military are certainly treated like second-rate citizens.  Remember, they're not protected by Article 2 - the right to life - of the European Convention on Human Rights 1950 (ECHR) when deployed abroad, unless they are on a military base.  What other public servant is denied the protection of article 2 if they are a British citizen?  Even bankers are protected by draconian laws.  Some more than others although his efforts to suppress his 'services to banking' knighthood is being ridiculed.
Tweet
Posted by subrosa at 09:07

Can the military really be provided with such extensive ECHR protections, given the type of jobs that they do?

I am not saying I am against it, but it does occur to me that if they did; you would have every sh~st~r lawywer trying to work some kind of compensation angle etc.

But I do agree Subrosa that the ECHR convention is vital, and any attempt by any government to withdraw from it would be mad, bad and very dangerous. Public sector workers, private sector workers, and lay citizens require the protections it provides.

But then, I would say that, being incredibly pro-liberal institutionalist!

Why not Dean? If the police go abroad to investigate cases they're covered.