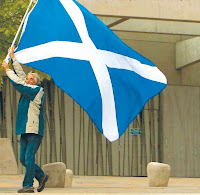 It hasn't been a good few days for the Scottish Tories or the Libdems.

The Tories aren't particularly popular in Glasgow; in fact they're decidedly unpopular.  Last week their top regional list candidate for Glasgow was sacked for not declaring a couple of bankruptcies, although the candidate, Malcolm Macaskill insists the party was told some time ago.  Mr Macaskill's sacking has caused ructions with many of his friends and colleagues seriously discontent.  Being a man with a healthy dose of common sense, Mr Macaskill took his wallet with him when he left the fold, resulting in two of his pals threatening to withdrawn substantial amounts of funding. One pal was prepared to donate £100,000 a year for ten years.

The Tory high heid yins say there was nothing in the least suspicious about the sacking and the fact they submitted the official nomination papers - which included Annabel Goldie's close friend Ruth Davidson and not Mr Macaskill - was pure coincidence.

Last October Ivor Tiefenbrun, the prospective candidate for Maryhill and Springburn, had to resign after calling Scots 'thick'.  He was replaced by the senior Edinburgh tory Iain Whyte.  Now, Mr Whyte is a member of NHS Lothian and he thought he could stand down from the health board during the election campaign then return if, as he expected, he failed to get elected.  Then he discovered that wasn't allowed and a return was out of the question.  Knowing which side his bread was buttered on Mr Whyte withdrew his candidacy.

The Tories have now lost three candidates and the campaign has only just begun.  It doesn't bode well for them.

The Libdems are having trouble too. Hugh O'Donnell - ok, I hadn't heard of him either until yesterday - had been seeking re-election as a list MSP for Central Scotland but decided to quit the party and stand as an independent.  He accused the Westminster government of going for 'easy targets', such as disabled people, in its cuts programme. "As Liberals we started the welfare state.  We shouldn't be the party that dismantles it," he insisted.  Some suggest the SNP could benefit from the Libdems' discombobulation.

At least the Tories and Libdems can't complain about a lack of column inches in the Scottish press this weekend can they?

I'd like to propose that Iain Gray study public speaking in Paraguay.

Hugh O'Donnell is to be congratulated.

Not the only prospective MSP that may have had a colourful past and perhaps a dubious incident or two.

Take the Labour prospective MSP candidate for Argyll and Bute, for example. A Mr Mick Rice, a former Labour Councillor down here in Birmingham is known to the police.

I wonder if the good folk of Argyll and Bute would really, really be happy with the likes of Mr Rice representing them. Perhaps they should make themselves aware of his "colourful" past. But then Labour said he'd never been convicted of any wrong doing. Such as trousering public funds for example. No indeed.
Labour's scarcity of suitable candidates must be dire if they have to snuffle amongst the dregs of a trough to produce such as himself. I also wonder if his guest house offers entertainment and ammenities, such as saunas and massages for his clientel. After all, one must improvise and be open to all digestive suggestive ideas in the pursuit of gravitas, mustn't one, Mr ex Labour Councellor Rice? resign, did you?

wisnaeme - He will feel right at home here in Scotland then as Labour are the party of corruption up here and he will be well protected by the party and the press.

You omitted 'on a one way ticket' Tris.

Truthfully Niko, I am speechless at times. Today I revved up the new Wii Dance CD and I've been speechless ever since. The pain should ease by the end of the week I hope.

Will he be missed though Aangirfan? Like most list MPs he seems to have been rather invisible.

Aye wisnaeme, I read about that chap after I'd written this. Strange goings-on but it shows councillors are a law unto themselves in many places.

Thanks for the link CH.