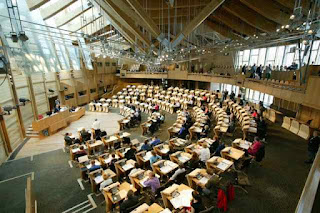 Party leaders were over the road at the Palace of Holyrood House, welcoming the Pope to Scotland, so FMQs was left to the deputy leaders today.
Johann Lamont, for Labour, questioned the deputy FM on the reduction of teachers, jobs in the public sector and jobs within the Scottish NHS. Nicola Sturgeon gave a feisty performance as she added some facts to the figures quoted by Ms Lamont.
Murdo Fraser decided upon one of my hobby horses - the number and cost of quangos in Scotland. The deputy FM did her best to defend the indefensible.
The deputy Libdem leader, Mike Rumbles honed in on the SNP's 'failed' manifesto promises for projects in the north east. His efforts to trap Nicola Sturgeon on grading the First Minister's abilities fell on stony ground. They should have stayed there in the first place.
It was good to hear the deputy FM reiterate, on several occasions, that the forthcoming cuts were the responsibility of the last Labour government and them alone. They need to continue to repeat this until it becomes embedded on the mind of every voter in Scotland.
Once the BBC puts the video online I will post it here for those of you overseas who find access blocked.
Tweet
Posted by subrosa at 13:05

I truly hope that the SNP learns to repeat over an over again at every opportunity from now until election day on 1 May that the forthcoming cuts are the responsibility of the last Labour government and them alone, for there is absolutely no doubt that Labour are ducking and diving already in order to avoid blame and also place it on the SNP if they can get away with it.

Good for Nicola - and quite right too to bang it back to labour, never mind until the election, from now until doomsday - just like the winter of discontent. Bet they thought we'd forgotten about that one.

The look on Ms Lamont's face the times she said it spoke volumes Dram. They must keep ramming it home until it's as common as fish and chips.

Nicola is superb. There is no doubt in my mind that she is a leader in the making.

Her intellect, and her capacity for thinking on her feet impress me every time I see her.

She's a lovely person too.

She's certainly got what it takes Tris and is most effective. Definitely the next leader I'd say.