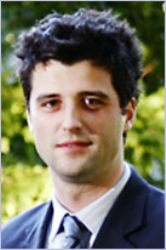 The photograph is of Peter Lyburn. He is the Tory candidate in my area (Perth and North Perthshire). I've never set eyes on him so I have no idea if his photograph does him justice.
What I do know is that he's offended a great many people in this constituency with his recent behaviour and I'm not talking about only the 'ordinary' voter but prominent business people in Perth and Perthshire.
Mr Lyburn decided to send a letter, critising Labour's planned 1% rise in National Insurance, to the local newspaper, The Courier last week. However, as well as signing it himself, he signed it with the names of many local business folk - without asking their permission.
Paul Shields, the president of Perthshire Chamber of Commerce, insisted he knew nothing about the letter, far less he would be a signatory to it.
"I haven't seen an open letter. I haven't signed an open letter. I haven't clapped eyes on an open letter.
"The Chamber of Commerce is very much a cross-party organisation. My own political opinions are private and I am not a member of any party.
Another local firm express concern. John Ferguson, a director of car firm Lamb and Gardiner said : "I didn't sign any letter. Peter was in the other day and he mentioned the NI increase.
"I feel he is taking a liberty. He even signed my name as the owner which I'm not. I have a partner and what is he going to think when he reads this?"
Is it legal to sign a letter with someone's name if they haven't given their consent? This is a gross breach of honour by Mr Lyburn, although it does show me that he's certainly not someone to trust. Even in his response he refuses to acknowledge it was a letter and calls it a list.
Mr Lyburn responded, “The Conservatives have been very clear in press releases and interviews that we welcomed support from businesses for our economic plans. Every business person on that list supports Conservative plans to scrap Labour’s jobs tax.”
Caron has also posted about Mr Lyburn's behaviour with the opinion that she doesn't see how he can continue in this election with any credibility at all. Completely agree with her.
My MP and MSP are both SNP. They treat their electorate with respect and do not take any support for granted. Take a leaf out of their book Mr Lyburn.
source
Tweet
Posted by subrosa at 16:53

Amazing. Working on the assumption this is true (I don't entirely rule out possibility of dodgy journalism either - but my guess is that it is true) it's just incredible.

He should be resigning in shame, not saying they agreed with the content.

(PS - I think you might have missed a "not" in this sentence: "This is a gross breach of honour by Mr Lyburn, although it does show me that he's certainly someone to trust. ")

The Courier is usually fairly accurate in its reporting IPP, and I would say it is in this article.

You see, the owners of the paper are staunch Tories. So they wouldn't write a negative story about one of the 'own' would they?

Thanks for pointing out my error. Too much haste.

Hopefully it'll make things easier for Pete Wishart though. Even without my party loyalty, he seems like a damned good MP.

What is happening to our political parties, that they think they can foist immature young wannabe’s onto the electorate?

Labour had to get rid of their immature and inappropriate candidate Stuart McLennan for his tweeting.

Now it would appear that the Tories think it acceptable for their equally immature and inappropriate candidate to misrepresent members of his constituency.

Whatever happened to potential MPs putting their constituents before self and party?

Or is the prime directive now to simply get elected by whatever means available?

Pete's good Hythlodeaus. He's approachable and would never stoop to such actions. I know that.

Hello John. I do know many of the people mentioned in the letter support the tories openly but to abuse their loyalty in such a way surely brings the tories attitude into question.

In answer to your latter question for some it is yes. In answer to the penultimate one, it shows politics is no longer a public service but a career.

This isn't meant as a carp (I agree it's disgraceful behaviour), but is it really because politics is becoming a career? Who could get away with such behaviour professionally? I can't offer a better explanation, but I have a feeling something else has to explain it.

I'm fairly sure few could get away with such behaviour in a high profiled business IPP. Maybe it's because he feels some of the tory business people wouldn't complain. He was wrong.

The idiot has had to issue a formal apology.

Jamie Glackin, Labour's candidate for the seat, said: "They should have been made aware that they would be politicised in this way.

"This was a pathetic attempt by the Tories to disguise the fact that their policies will be bad for the economy and jobs."

How depressing. The guy has just wrested a public apology for dishonourable conduct from the Tory. You'd think that would be enough. But no, he has to say that the Tory did it "to disguise the fact that [not raising taxes on jobs] will be bad for... jobs".

Does this tard actually believe that? Does he honestly believe that the Tory guy did that stunt because he believed not raising job taxes would be bad for jobs and wanted to disguise it?

Did he honestly believe that, is he really that stupid as to believe a Tory thinks not raising job taxes would be bad for jobs, or was he lying?

They're all so damn contemptible.

Many thanks for the link SE. I happened to see it in the local paper just this morning.

He thinks the matter is over now.

What I don't see IPP is where is any party going to find these jobs?