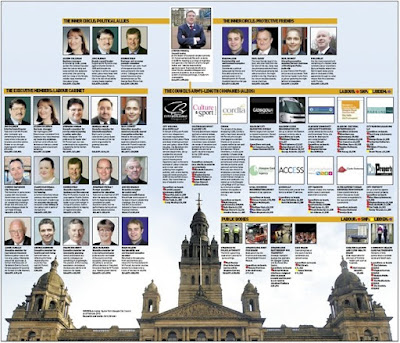 Click here for the pdf
The political tensions within Glasgow City Council rumble on as they have done for years, but since Steven Purcell's abrupt department a few weeks ago, the tensions have increased. Yesterday there was a 90 minute meeting of the council to discuss the consequences of Purcell's departure but, by all accounts, it was an undignified melee including Alistair Watson, the recently resigned chair of SPT who quit over expenses, saying: "For the SNP, this is about saving the seat of a nasty man (John Mason MP) in the next election. They are nothing but street corner gossip merchants on Coronation Street."
The Herald has provided an excellent graphic of Glasgow council's Arms Length Organisations (ALEOS), the associated councillors plus details of payments they received. (click on the link above)
As well as a list of who's who, it displays the cronyism within Scotland's largest council offices. The cost of jobs-for-the-boys-and-girls is estimated to be around £400,000 - a sum which may have some Glaswegians fuming.
The result of the vote for an independent inquiry was 23 for and 48 against. Of course labour don't want an independent inquiry, because then the cronies and their loyalties would be tried to their limits, but Glasgow needs to be thoroughly examined - if only for the sake of all public service in Scotland.
Tweet
Posted by subrosa at 09:06

It's all a Nationalist plot Rosa...

Apparently the Lib Dums are against an enquiry as well sad people. Go Lassie Go blogging on it as well.

What have labour got on the libdems CH? Thanks for the link to Joan. Haven't had a look around yet today.

Unfortunately for the SNP they have completely compromised themselves by taking renumeration for sitting on the boards of these arms length companies.

Membership of which meant that you couldn't publicly criticse them, and they didn't.

The only people who consistently opposed the Purcell culture of mixing up private and public, and leaving so many loopholes in the process, were the trade unions.

Oft criticised by SNP supporters subrosa, not least yourself, but they seem to have remembered where their principles were on this occasion, unlike the SNP Group on Glasgow City Council.

But anyway, the policy of ceating arms length companies has been reversed.

So that's one good thing which has come out of this fiasco.

Team Glasgow. Now what is that all about? Is Glasgow City Council the right 'picture' in terms of 'bigness' to be looking at? Or should any inquiry into Mr Purcell's behaviour be determined in another forum and given a grander perspective?

The west of Scotland has been dominated by labour for the past 50+ years HG and corruption is well suspected.

I'm not sure if the Scottish government can insist on an independent inquiry although I do feel there should be one to clear out the debris if nothing else.

It's impossible to support the SNP on this Observer because, as you say, they overstepped principle and took places on these organisations. Perhaps thinking better inside than out but it doesn't make it right.

Uh huh, it's all the wicked ethenpee's fault. They dun it and ran away.We did nothing wrong. We are doing nothing wrong and we will continue doing nothing wrong because we excel in the cultivation and production of mushrooms. We also have a nice little sideline in manufacturing @rseholes; some of whom we even export to far away places
like Westmidden and Embra, where they do no wrong either. We excel in manufacturing @rseholes so we do. We have a proven track record of doing so, what with our wealth of experience and expertise an that.

...and for as long as the mushrooms allow us to continue in our endevours towards excellence, our excellent @rseholes will continue to provide manure for them.

We should now be having Glasgow Council elections as the whole lot ,(except, the SNP, Tories, libthingies and independents) are bent.

That won't happen of course DL. Still wondering why the ibdems voted against an independent inquiry.

In looking at newspapers, the utter stupidity of some of their stock phrases and jargon is quite amazing. Take the word reveal. Who on earth could have thought that the Herald's headline on its front page was an earth shattering revelation -

'Revealed: cronyism at the heart of Purnell's council'.

Is there anyone in Scotland who thinks that there could be nothing untoward in a central belt council? Just who did the Herald's subs think would be set back on their heels by the article and the spread inside?

Even the Daily Record is now saying in it comment page that there should be an independent inquiry into Purcellgate.

With the Record now on board, this is only the beginning, not the end of Purcellgate.

Reading the article I got the impression that the Daily Ranger was upset that Stephen Purcell had given his exclusive to The Sun. That may prove to be yet another bad decision, one of many, made on Purcells behalf during this affair.

P.S. On another blog someone said the only Tory also voted against an inquiry.

I'm sure even politic-phobes know the situation in the central belt Richard.

Aren't some of the Herald's articles written south of the border? I may well be wrong about that though.

Jings Dubbie, who'd have thought that. Haven't read the Record today so thanks.

A few folk wondered why Purcell went to the Sun, myself among them.

I don't see a problem with the SNP on these boards - none received big money and there were few of them. Also it can be better being inside than out.

There's something not right here Dubbie. Why are all the other parties voting against an independent inquiry? It stinks.

Just a thought. Purcell or the people advising him probably thought that The Record would not attack or investigate him as it is Labour through and through, but if he had given The Record the exclusive the Sun would have gone for the jugular.

What I still find most puzzling is the Lib Dems, does it not go against all they are supposed to stand for re open government etc?

The other thing is, I may be wrong but I always thought that Labour had an outright majority on GCC anyway, so they would probably have won the vote without the Lib Dems. So the big question is why did they side with Labour to block an independent inquiry.

Maybe someone should ask Clegg about this vote. I will be asking and Lib Dem who comes looking for my vote. Not that they would be getting it anyway.

Hmmmm. . . the Herald has some interesting information on Weegiegate today.

So the Fibdems are not really, really enthusiastic about having a public inquiry into whatever.

Perhaps we should be asking Fib dem Councillor Christopher Mason why he has such a lack of enthusiasm for openness and accountability? Shurely being shy is not a trait one would expect of being pre-eminent in Weegie councillor's dispositions.

SOMETHINGS TO HIDE HAVE WE, COUNCILLOR MASON?

Ah wisnaeme, haven't managed to read the papers as yet. Will do so in the morning though. Intrigued.