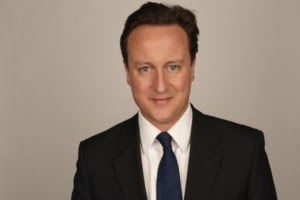 David Cameron is visiting Perth tomorrow to speak at the Scottish Tories one-day conference. He's desperate to tell the Scots not to tar him with the same brush as Margaret Thatcher - he leads a "different Conservative Party to the one that was in power in the 1980s".
So far, so good but then he starts to insult the Scots (my emphasis):

Tosh indeed and if he knew anything about the Scots, he would realise we are not simple minded oafs - at least not many of us. Even the most hardened unionist knows that Alex Salmond would never utter such tosh.
He says there is a need for Holyrood to have greater financial accountability but fails to give a guarantee it would definitely get more tax powers under a tory government.
What is missing is Mr Cameron's vision for Scotland. Where is it? We have a right to know what his government would do for us. Surely he's not using up his carbon footprint purely to patronise us? I remember someone with a handbag did that on the odd occasion and it proved fatal for the tories. Mr Cameron would do well to keep that at the back of his mind.
source
Tweet
Posted by subrosa at 07:52

To be fair it is tosh to say that as independent we wouldnt have had any debts. Being fair. It is tosh.

Of course it's tosh but has Alex Salmond said it? No.

And of course Dean, we all know if we had been independent when oil was first discovered we wouldn't have horrendous debt would we?

Not that I like to reflect on such facts - it's too upsetting.

But it's never been said no matter how much Cameron wishes it had been. No country is ever totally free of debt.

I would prefer an Independent Scotland to a Labour one. Trouble is we have all your cast offs down here and look at the mess they've caused.

Must agree OR they're not a bunch anyone could be proud of are they?

You know you are always supposed to believe a smarmy Englishman over a Dour Scot.

Sorry Niko, the day Brown murdered my pension I stopped believing any of them.

Do we use that word in Scotland? I've only ever heard it in stories like Billy Bunter at Greyfriars.

I'm not a believer in the divide between the public school and Oxford brigade and the rest of us, but "tosh"...?


The word is "mince" Mr Cameron. If you're gonna come to our country, try to speak our language.

Cameron is going to lose this election.

His shallowness, his intellectual laziness is going to haunt England by allowing Incapability Brown to grab merde from the cess-pit of defeat and spread it all over us.

Is this the only choice left to us. Which category of vermin we choose to live with?

A hung parliament. My preference would be to hang its members.

He is shallow RA, I agree and I don't think he has the ability to be anything more.

There is considerable opinion on the net about a hung parliament. The majority seem to say that the English wouldn't tolerate it and another GE would be held before the end of the year.

You're quite right of course!

Can we expect another 'Declaration of Perth'?

Oh I think the English would tolerate, perhaps even welcome a hung parliament Rosa.

Unfortunately the Establishment wouldn't, which is probably what you meant.

I think the electoral watchdogs are going to have their hands full policing this election. The potential for postal fraud should raise enough income for the Post Office to solve its pension deficit.

Somehow I doubt it Strathturret. Even the bluest tory I know isn't bothering to go to Perth tomorrow. "It's too cold and I don't really think he's got much to say" said she.

Yes perhaps that is the general opinion RA, as much of it has been said my professional journalists.

Labour will have the postal votes all stitched up by now - at least their scheme. All they'll require is a box of Bics.