Rail Decision Must Be Stopped in its Tracks 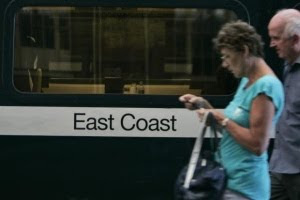 There are two arterial routes to Scotland by rail.
If you travel to Scotland from London or the south east of England, the train brings you up the east coast to Edinburgh and for those who wish to travel west, it continues to a final stop at Glasgow.
Should you wish to travel from Cornwall, Devon or Somerset to Scotland the route is up the west coast to Glasgow.
Now the Westminster government and the rail industry have decided that the London/Edinburgh/Glasgow east coast main line service is to be axed. From 2010 all trains will stop at Edinburgh. Those wishing to travel to Glasgow will be required to change trains, thus taking the clock back years. The East Coast Main Line Glasgow/London was fought hard for by many rail travellers and it must be distressing to see it return to the old days when the east and west were firmly divided.
The problem arises in the lack of a service from Glasgow to the north of England and such destinations as Newcastle, York and Doncaster could be affected. Unconfirmed reports suggest that Arriva Cross Country could take up the 'slack' under the new timetable by extending its service it operated from Glasgow along part of the East Coat Main Line as far as York.
That would leave only destinations in the south-east of England without a direct connection to Glasgow.
The news comes three days after the Department for Transport said a government-owned company, trading as East Coast, would take over operation of train services next Friday from National Express who stated in the summer they wanted to relinquish the contract.
John Mason, the SNP MP for Glasgow East:
'... the changes revealed Labour’s “hypocrisy” on rail following criticism this week of the SNP’s decision to scrap the Glasgow Airport Rail Link. He added: “These plans, which have been made without any consultation, are a serious mistake and must be stopped in their tracks.”
What strange timing by the Westminster to announce cutting such a vital rail link between Scotland and London. Have they forgotten there is a by-election in Glasgow NE next week or are they so confident they will win, that Glasgow isn't important to the UK? Possibly both.
Source
Tweet
Posted by subrosa at 08:34

Can you not get from London to Glasgow via the West Coast Main Line from Euston? So all that will really be affected are direct links with no changes to Leeds, York and Doncaster. And these will be restored by Virgin Cross Country in time.

This might not be as dumb as it seems. Glasgow’s link to London is not changed, who would go from Kings Cross to Edinburgh and then on to Glasgow and not directly to Glasgow either but via Carstairs Junction (because the more direct route is not electrified) when you could go directly from Euston. Especially in light of the improvements made on this line, competition on this business is wasteful.

It makes sense to let services between Edinburgh and Glasgow be improved locally as this relieves traffic on the motorway and improves the commuter service each way. And I’m afraid to say it’s profitable. Cross country links east to west are better served by a firm like Virgin Cross Country that has developed this kind of business than by a north to south main line like National Express. Indeed they made a mess of what under GNER was one of the most prestigious and profitable post 1994 franchises.

Your post makes a lot of sense Munguin. What concerned me most is that a pal who lives in the west will now have to change at Edinburgh to visit her grandchildren in Newcastle.

I thought public transport was supposed to be more convenient these days. We're going backwards but it's all about money of course.

Oh btw, are they going to increase the number of trains on the West Coast Line now do you think?

To be honest, I agree with this decision in principle.

This is for two reasons:

Firstly, there is a committed improvement programme to improve the woeful level of connectivity between Glasgow and Edinburgh, with a planned journey time of 35 minutes every 10 minutes as opposed to 50 minutes every 15 minutes. This must be the priority, and it might require removal of the Edin-Glasgow leg (and vice versa) of London services. This will have enormous benefits for both cities in terms of the regional economy. A London to Glasgow connection at Edinburgh with 10 mins maximum to wait and a 35 min journey is perfectly acceptable.

Also, the high speed rail project - if it gets off the ground - would run to both Edinburgh and Glasgow from London, but not join up the two Scottish cities. This is because journeys less than 150km are simply not viable in terms of high speed rail.

Having said that, if we were stuck with the status quo and no planned improvements, and the service was scrapped, I would be concerned.

S/R yes I agree it will be a disadvantage to people going direct from Glasgow to Newcastle, Durham, York and Doncaster but only until Virgin Cross Country takes over that business and it may actually improve Glasgow’s direct connections via Virgin Cross Country’s existing links. I don’t know if more trains will run on the West Coast line, I’m not so sure they would be needed. Let’s face it if you went from Glasgow to London regularly would you go via Kings Cross? So I’m not sure a lot of London business goes that way. If it made money it would not be withdrawn. It’s a waste of money to run a big express train on a commuter route, it would be better to improve the commuter service.

I travel to York, my favourite English city, quite a bit so, selfishly, I want to be able to continue to do so. I should imagine that I am not alone.

Jess haven't I heard about the improvement of the Glasgow/Edinburgh line for... ahem... well over 10 years now and nothing's happened?

The high speed will never get off the ground. We can't afford it and London isn't interested in coming this far.

What a cynic I am.

No I wouldn't travel Glasgow/Kings Cross Munguin. I see you're of the same opinion as Jess and I accept that argument.

I don't think it's selfish brownlie. Actually I so seldom travel by train these days. Even reading the timetables is something which winds me up and I never get that right.

You'll just have to get on one of these speedy new trains Munguin's talking about then change at Edinburgh.

York is lovely, I have happy memories living not far from the city.

The east coast to Glasgow link has the benefit of less curves and a flatter profile than the Glasgow to Euston line. The east coast line lends it's self to improvement to very high speed. Similarly the Edinburgh to Glasgow route taken by these trains goes via Motherwell, so does not impact on the Edinburgh to Glasgow via Falkirk main line. My view is this is a retrograde step and certainly should not be contemplated until the alternatives are bedded in.

What was that you said? "Ripping Glasgow off" I see the BBC went all Glencambly on this....no one to blame, least of all Labour

The Edinburgh to Glasgow improvements are happening and Network Rail are borrowing to fund it.

The current service has long been recognised as inadequate.

Jury is out on high speed rail, but I am cautiously optimistic. The reason is that "benchmarking" against other European cities is the current fashion, most UK cities perform woefully and the biggest barrier is normally lack of transport infrastructure....usually high speed rail and light rail/tram. HSR isn't viable over medium distances (as is demonstrated in Spain) and the only logic is connecting London with Edinburgh and Glasgow, via Birmingham Manchester. At a guess, it might be a case for connecting Bristol to London (maybe Birmingham) as well, I would say,while they are laying the track anyway. Tory Shadow Teresa Villiers was at the high speed rail conference in September so this is at least lip service being paid to the concept.

HSR works, pioneered in Japan (where they paid the loans back early and it was built on time).

A step change is what is needed in transport, and this is slowly being recognised.

Jess, whilst I agree with your argument, I've heard it for the past 30 years.

50 years ago nearly were the Beecham cuts and then 10 years later people realised what they were missing. Too late to return to the 'good times'.

Yes many other countries do have excellent railways and I've used them. It's going to be a VERY long time before these islands see anything like the standard of Switzerland for example.