Tommy the Tan to Stand in Glasgow NE By-election 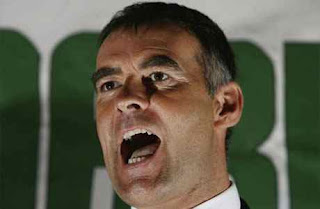 Tommy Sheridan (commonly known to Scots as Tommy the Tan) has launched a bid to replace former Commons Speaker Michael Martin as MP for Glasgow North-East.
A meeting of Solidarity supporters voted to adopt Mr Sheridan as their prospective candidate earlier this week and he will officially put his name forward in September to stand in the by-election which is now expected to be held in November.
Over the years I have heard Tommy speak on several occasions and admit he is impressive but now my thought is he's past his sell-by date. Dare I suggest he stick to finishing his law degree then put these skills to good use rather than attempt to return to the political scene.
Source: Herald
Tweet
Posted by subrosa at 00:45

Och, he's just a clown who loves the sound of his own voice. Pretty much sums up all politicians!

He's got a braw voice though Rab, ye cannae say he's no. Tanorexic - love it!

Can't help but think it's all about the publicity for Tommy.

Oh well, at least he'll get another tanning out of it!

He's a 'people' person Sean and needs to be in the limelight.

Morning Stuart, slightly cooler at the moment I think. He's not as tanned as he used to be is he? You would have thought so many court appearances would have browned him off wouldn't you?

The votes are already counted, the ballot boxes validated and the register well and truly lost. The lessons have been learnt from Glenrothes and Lord Martin of Articulate Speakership's son will be crowned forthwith. Democracy, in Labour, no way!

Damn! A pal told me to buy shares in Cuprinol and I didn't listen...

OR, I don't think Martin's son is standing as he prefers to keep his position as MSP rather than have to travel to London.

About the rest you're right though. Corruption is the name of their game.

I'm kind of teed-off too forfar-loon because I was told it was Butinox he used and it's Cuprinol. Win some, lose some.

For those whose days are not totally preoccupied by the upcoming byelection, Willie Bain is the Labour candidate. He is a law lecturer at South Bank University (near the Elephant and Castle). Despite the usual tags of 'local' and 'activist', Mr Bain has not been seen around Springburn for a wee while.
I used to tease him outside the Springburn Shopping Centre by asking to see the Labour leaflets he was handing out to passersby. He would refuse categorically, perhaps fearing we might find out what the party's policies were.

I understand Mr Bain works in London. Is it any wonder he's rarely seen in Springburn. Oh, you've said he works in London. Apologies for repeating it. I'm nervous listening to the tennis here.

Tommy "what's in it for me" Sheridan - he should stick to what he knows best - feck all!

Auch CD isn't that a bit harsh. The lad came from 'nothing' so his Mum says.