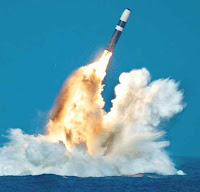 Gordon Brown is considering ditching the new Trident nuclear deterrent to save money according to the Scottish edition of the Daily Mail. As ministers search for cuts in public services to plug soaring debts, the £20 billion replacements for the current nuclear arsenal could be scaled back, or the existing warheads made to last much longer.
The plans, which are being discussed by Cabinet ministers, emerged as the chancellor was accused of a cynical manoevre to hoodwink the public about how much money Labour will have to slash from front line services.
Ed Balls admitted yesterday that tough choices would be necessary and said, "I think if we are deft and we can get the economy right we can keep investing in schools, hospitals and our police at the front line." But in private ministers acknowledge that severe cuts will be necessary. 'Big Ticket' defence projects will be first in line.
Now MoD officials are actively considering a cheaper nuclear arsenal, which could see the UK reliant on missiles based in Britain or arming aircraft with nuclear bombs instead. Another proposal would see the lifespan of the current missiles extended to 2060.
An MoD source said, "All spending will be reviewed next year and that includes Trident." May I remind them to include safe equipment for the military. It is a disgrace that soldiers are being put at serious risk while politicians play games about who can lie the most.
Ah! So another urgent matter is to be delayed until after the general election. Of course it is part of the Comprehensive Spending Review which Alistair Darling kicked into the long grass last week. This Westminster government has no shame.
Tweet
Posted by subrosa at 21:46

Has he told Jackie Baillie?

Aye and the carriers are £1 Billion over budget and rising!

Looks like we have a difficult few years ahead of us, I say hold our Referendum next year, the Scottish Public demand it, and get Independence we can't possibly be worse off under our own steam.

I doubt if he knows who Jackie Baillie is Andrew!

CD, on radio 4 last night there was talk about scrapping the aircraft carriers. I only caught the last bit of it.

Having said that Fairfields yard in Govan and Yarrows Scotstoun are well placed to produce the engineering we are going to need to meet the ambitious energy targets set by the Scottish Government. Along with Nigg Calanish and Arderseir. We have the ball at our feet now, and the goal is wide open. Scotland can and should if all the cards fall right become the powerhouse of Europe. Cannons into ploughs or something..

KBW, I'm not sure how important these carriers are to the needs of the Navy. We'll have to hope CD makes a comment about that.

I don't think Brown will ever see himself as a ruined man, he has an amazing sense of his own worth.

That's interesting KBW, I didn't realise we still had industry to do that in Scotland.

Do hope they get on with it and not pussy foot around too long. That's the way labour behave and we must not drop into their disreputable ways.

I was dozing through the Today programme, but I heard that some committee headed by Paddy Ashdown and looking into defence needs has suggested that nuclear weapons will have to go, as will the aircraft carriers which aren't needed... (specially now as they are running £1 billion over budget)

I wish I'd woken up properly and heard the discussions. But it seems that the advice is for huge savings on things that are of no use to us, and investment in what the forces actually need.

Goodness. That almost sounds like common sense, so I probably dreamed it.

I read somewhere sometime ago that the aeroplanes designated to take off and land on these floating runways need to generate such energy to take off that the temperature from the engines exceeds that which all known deck surfaces can stand.

Not me FC, but I'm sure one of the readers will.

They're cuts tris, I doubt if there will be any investment in equipment in the near future.

Don't think you were dreaming. I've just heard on radio labour are now talking about not making ID cards compulsory.