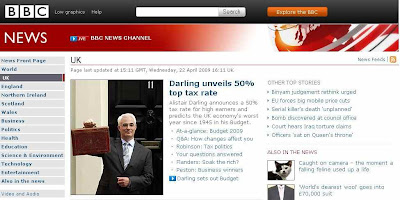 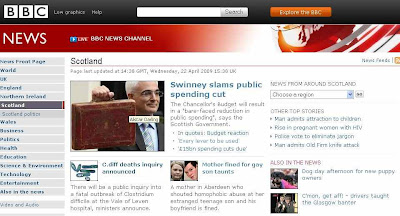 Click on image to enlarge
Kezia Dugdale, to her credit, posted these two pages from the BBC's website. A perfect example of the bias the BBC has shown towards the SNP for years.  Who said the BBC is impartial?  It's time Scotland had its own broadcasting organisation, in fact way past time.
Tweet
Posted by subrosa at 17:21

If her blog is anything to go by she's clearly not cut out for politics.

Back to the mater in hand - don't pay them money they're twisted crooks impartial my plucky erse!

I'm getting to the stage that I'm going to stop paying this daft tax. Why pay for something you never watch except on the odd occasion. It would be far fairer if it was pay-to-view and now everyone as to go digital they can get their news elsewhere - with no bias.

"A perfect example of the bias the BBC has shown towards the SNP for years."

TBH I can't really work out what either you or Kezia's point is here, subrosa?

I got the impression she was saying BBC Scotland's headline was pro-SNP.

And presumably you're arguing the contrary (do you mean BBC bias *against* the SNP?)

Personally the headlines seem pretty reasonable to me, from the UK and Scottish perspectives, and you surely can't be arguing that the Scottish headline is unfavourable to the SNP?

The BBC is a shameful main player in the mess the UK is now in. They have spun, licked and f***ed their way into history as craven and very nasty lickspittles of Labour. They have replaced Trade Unions in their position within the dung heap that is Labour.

That was how I felt about it Subrosa. I rarely watched it, and when I did it was stuff that I could watch the day after or at any time really.

The final straw was Kirsty Wark's interview with Alex. I know she had to apologise to him, but in my opinion she should have been sacked. Not, clearly, for being rude to the First Minister (anyone should be allowed to do that) but for blatent bias in her interview. (OK I know she was McConnel's best mate, but she's paid enough to be professional.)

Anyways, after that I sold my tv, cashed in the licence, bought some new jeans with the money, and now, as I say, if I want to watch anything, I do it on line.

Clearly, as you pointed out the other day, that's not going to be an option much longer, and I'll have to buy a licence if I continue to have a broadband connection. I think I'll just defy them and go to jail.....

Well spotted. Missed this one.

Like Jeremy Paxman said, it's like paying a tax to the manufacturers of Persil simply because you own a washing machine.

Auch Stuart, I think it's time we had a we heart to heart. Why did the Scotland part have to say 'Swinney Slams...' when the UK version never mentioned John Swinney. Of course you may well say he's not important south of the border and in that case Scotland isn't either.

I don't know where you're coming from really. I do know you try to be unpolitical but when you see something so partisan can't you just see my view for a wee change.

Careful now tris, the men with the aerial will get you if you watch live BBC online :)

OldRightie good point there and the unions have taken over the labour party.

Too right John and more and more folk are beginning to resent paying it.

Subrosa, sorry but I really can't see where you're coming from here.

Second, that headline would have been a ridiculous headline for the UK news site, don't you agree?

Third, I think Kezia's point is that the Scottish headline is biased against Labour, as seems to be confirmed by the comment by 'Thirty and Counting' and Kezia's subsequent comment.

Stuart I see now what you mean. I was looking at it for the other angle. My apologies. Mind you it was published before the budget had started I think. Must re-check.

It's still time we had our own broadcasting though. This control from London doesn't work these days and BBC Scotland news is just pathetic.