When Will The PC Lobby Stop? 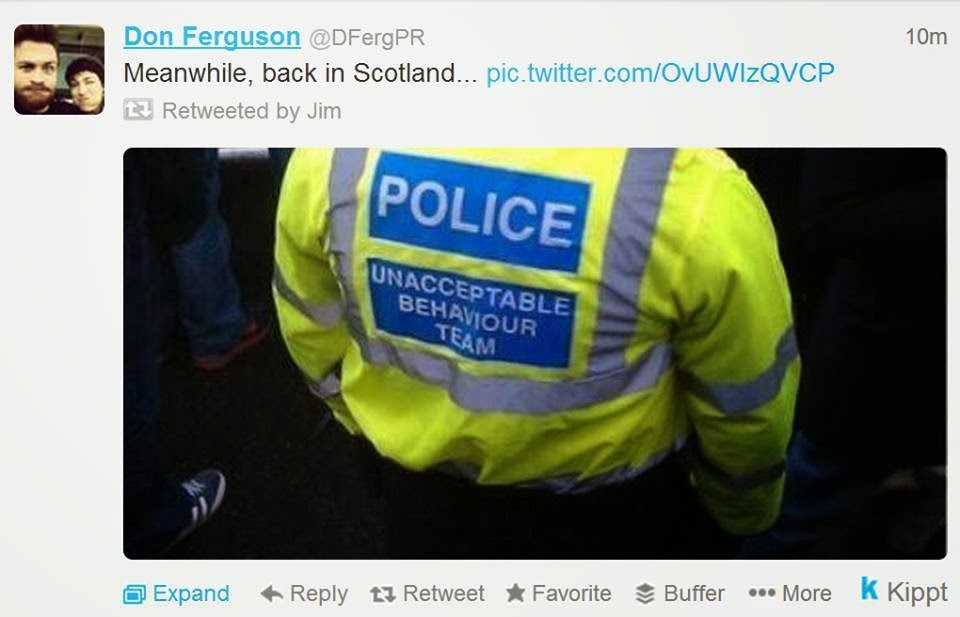 I saw this on Twitter the other day. Can’t confirm it was taken in Scotland but the photo itself looks authentic.

Society is changing too rapidly for me. Is there never going to be an end to the politically correct lobby?

Many a true word is spoken (or in this case, written) in jest.

But the delicious and appealing ambiguity of the picture is just from what quarter is the ‘unacceptable behaviour’ emanating.

If on the other hand, this is the latest police specialised crack rapid response ‘unacceptable behaviour team’ which detains thoughtless people for not giving up their seats on buses to the elderly and infirm; or for not holding the door open for ladies; or for humming inappropriate tunes; then I have to question on what basis the police are acting. Surely they are there to enforce the existing laws of the land, not to arbitrarily judge what is, or what is not, ‘unacceptable behaviour’.

And where does it all end? - is picking ones nose in public unacceptable, or calling your MSP a twat unacceptable – who will decide? - the police? - for they already appear to be a law unto themselves.

I blaim Nike for the fetish label fashion.

However - "....And where does it all end? - is picking ones nose in public unacceptable..." It should be, but in Parliament, certainly!

Some of us remember when "PC" stood for Police Constable...

In answer to your question. Only when sanity returns to society and it reverts to being a democracy that allows true freedom of speech for all of the people and not just for prodnoses, control freaks, puritans, lefties, greens and other assorted loons who wish us to have a lifestyle and political beliefs that conforms to their idea of what they should be.

… speaking of ‘political correctness’ and the police …

I see from today’s papers that the police have decided that it would not be politically correct to prosecute a high profile female celebrity chef, who by her own admission is guilty of both possessing and using a Class A drug.
Their reasoning being that they did not wish to deter future witnesses or victims of crime from coming forward if they thought they could be charged with offences for telling the truth.

I wonder if the same political correctness and reasoning will apply to Wee Jimmy, a long term underprivileged and unemployed youth from one of our cities run-down housing schemes when he admits to possessing and using a line or two of coke.

Are we really all equal under the law?
Or, for the sake of political correctness, are some more equal than others?

It won't stop until we stop accepting it.

Apparently an old photo from early 2013 at a football match in Glasgow where the police had agreed to attempt to reduce fairly low but potentially troublesome acts of sectarianism from local games.

A detailed paper on the subject. But if I read correctly - this initiative was to be a presence against non-criminal 'sectarian' pestering rather than some imagined 'thought police' policing.

That’s the elephant in the room JBR -‘where does it all end?'

Do you think I could get one of those jackets in JRB sports then Crinkly?

I certainly think some are more equal than others JRB, but where the buxom cook was involved, I believe it was all hearsay and no firm evidence. Hence no prosecution.

Do you think there are enough of us to stop though Woodsy?

Thanks Clarinda for clearing up the source of the photo.

I don’t care where they were, it’s just as worrying there is such a team.