Banking In An Independent Scotland 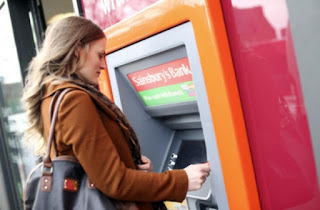 The news that Sainsbury is to take full control of the joint banking venture it established with the Bank of Scotland 16 years ago brought to mind a conversation I had with a friend recently.

She's a widow and lives in an attractive bungalow.  Her husband and herself worked hard all their working lives to provide for a comfortable retirement, but sadly he died just five years after he finally called it a day in his industry.  They had no children but for 15 years they were the (unpaid) carers for the husband's father and also my friend's mother.  It wasn't an easy task juggling the care schedule, travelling at all hours between two homes miles apart and working long hours in their respective jobs.

We seldom discuss personal finances, but the other day she asked me if I knew anything about how Scottish banks - the likes of RBS - would survive should we become independent. She is a supporter of Scottish independence and like me, feels that with effort, an independent Scotland would thrive.

Her one concern is her savings and he announced she was moving her money from the RBS to an 'English' bank this week.  We then had a lengthy discussion about her reasons and the main one was that she was unsure her money would be safe for the first few years of independence if it was left under Scottish jurisdiction.

Her decision made me wonder how many other people will move their money out of Scotland in an attempt to ensure it holds its value.  I was able to say that at the present rate of interest any invested savings are depreciating and I didn't consider an English bank would provide better than a Scottish one.

She wasn't convinced and is sticking to her decision. The talk about monetary union with the Bank of England was also part of her decision.

The Yes campaign haven't lost a vote (yet), but they really need to start addressing the people who have put a little aside to help in their later years.

Is the 'risk' any different to that which already exists?

Please thank your friend for me.

For this very sensible canny lady has made me stop and think of my own post independence financial security.

What will happen to my meagre lifetime savings?
Will the current miserly interest rates be held or will a ‘new’ economy be forced to impose tighter fiscal restraints?
Will Scotland on entering the EU as an independent country be forced to adopt strict economic and banking measures and could we find ourselves, like the Cypriots in having our savings stolen by questionable EU banking taxes?

Indeed, your friend has raised a very valid question.

… and whilst thinking about savings, what will a post-independent Scotland do about pensions?

So many questions still to be answered.

Its a very valid point if an independent Scotland keeps sterling (or indeed adopts the euro). If banks deposits in 'Scottish' banks are in a currency that the Scottish government does not have the keys to the printing press for, how could a Scottish government make good on deposit guarantees if banks went bust? You would be left with either massive borrowing (in a currency you don't control) or huge tax rises on the rest of the Scottish population.

"Including the Government’s acquisition of B shares in December 2009, the total economic ownership of the UK Government is currently 81.14% of the RBS Group"

Well unless an independent Scotland is not going to either licence or regulate any banks at all, there will have to be a Scottish financial regulatory system, and a deposit guarantee to EU standards as well. And as the banking sector is a fairly important part of the Scottish economy, one suspects they would want to have regulatory control over all the banks that do business in Scotland, and particularly any of them that take deposits from the public.

It wouldn't be much good relying on the deposit scheme for a different country, as they might change the rules after the event, and you'd be stuck with nothing you could do about it. This is just one of the risks of not having your own currency as an independent nation.

It may be well to consider that all the nasty things that happened to Greece and Cyprus could very well happen here, all the legislation is in place. Just look at the UK financial history, its all been done before.
Our only real hope is OUTSIDE the EUSSR, monitory union has been tried
before, and we seem to be replaying it,with the same result likely, the only question is where the war will start and when. Safety of your money? Look at the history of the last hundred years, this film has been repeated a few times.

Reading rowans-blog by Rowan Bosworth Davies is not encouraging to anyone north or south of the border, never mind in Ireland. I wish there something to recommend but there are too many uncertainties out there at present. It may be that no government will be doing any actual deciding.

Sobers, it would be usual for a 'bank' operating under a particular regulatory regime, to be a wholly owned subsidiary where the parent bank is 'foreign'. For example Santander is a 'UK' bank owned by Santander in Spain.

Clearly if Scotland operated its own regulatory system the banks operating there would need to be incorporated in Scotland but could be subsidiaries of 'foreign' banks.

My point though was the assumption by Subrosa's friend that RBS was a 'Scottish' bank when it clearly isn't, indeed IF Scotland was to have its own regulatory regime it does not follow that the UK-owned RBS might choose to operate there at all. In principle there is no reason why the owners of RBS shouldn't sell the premises to Oxfam and the trading name to 'The Dundee Working Men's Saving Society'!

If she's that short of confidence I wonder why she wants independence?

Perhaps not Joe but there's certainly been nothing from the Yes camp to reassure anyone. It's all been about what money people can receive and not save.

There was something in the news about pensions the other day JRB but it, as usual, was short on detail.

I worry about where all the money is coming from for all these handouts.

Well that was mentioned in our conversation Jim. Will RBS still exist?

And that's the reason she's concerned Apogee because she knows it's been tried before and failed.

I've sent her the link to Rowan's blog Demetrius, although she appears to have made her decision.

I also have concerns Woodsy but I still believe we can make it - eventually. When you're far nearer the end of your life then your money seems to matter more for some reason.