The Battle For Glasgow 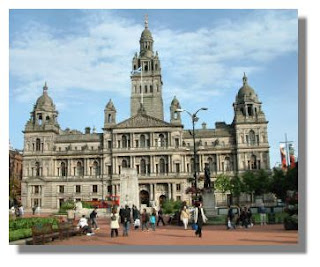 The Labour party's review of their Scottish branch has been made public with its staunchest supporter, the Daily Record, calling it the 'biggest shake-up in a century'.

As with any shake-up though, once the agitation stops, the elements will return to their natural position.  The Murphy/Boyack review contains little substance but it does alter the administration of the party in Scotland with the intention of giving more powers to the new leader, changing their constituency network and, according to the Record, 'a move to cut ties with the UK party'.

If the idea is to break away from the UK party - although the review does not propose a separate federal party in Scotland - surely Labour in England, Wales and N Ireland need to be renamed.  Of course that won't happen because Labour in Scotland will continue to be an integral part of UK Labour.  It's inconceivable that London Labour will cast off Scotland because without its support from north of the border the party would be unelectable in Westminster. Rather amusingly, the proposed changes have to be approved by the UK party at their conference in Liverpool in a few weeks time. Will Ed Miliband sign his own death warrant? Of course not.

Labour's reason for tinkering with their Scottish branch's constitution is not for the sake of Scots, but a desperate attempt to hold onto their fiefdom - Glasgow.  Without their 50 year stranglehold on Glaswegian politics they would become as insignificant as the Tories and the Libdems.  Give Murdo Fraser his due, he sees the Tories problem as one involving the whole of Scotland, whereas Jim Murphy and Sarah Boyack have concentrated only on the west.

I've no experience of west coast politics and rely upon other sources for information, but 'dirty tricks' and 'murky dealings' within the City Chambers (pictured) are often mentioned.

The battle between Labour and the SNP for Glasgow will be arduous and it won't be easy for the SNP to break Labour's monopoly, particularly when they have a prominent member such as Ari Mack publicly accusing his fellow local party members of 'paranoia, conspiracy theories, mental illness and downright stupidity'. The use of such language is unforgivable and Mr Mack should be shown a red card.
Tweet
Posted by subrosa at 09:41

Thats a very fair evenhanded attitude a high up leader of the snp
(Obviously he was a popular and highly regarded snp member)
makes some criticisms and all of a sudden he should be thrown out of the party.
spose we should all be grateful you never made it to sitting on the bench

Sounds like Ari Mack spat the dummy out when Nicola Sturgeon made them look again at their up coming election strategy, seems he wasn't the only one to throw a wee tantrum either.

I do think though, when compared to the problems Glasgow Council have with it's sitting labour cllr's; Ari Mack's comments are mere also-rans.

What do mean that Ari Mack should be shown the red card?

I understand it is a football thing but what do you mean in politics?

I don't care how high up Ari Mack has been in the SNP, publicly throwing that kind of temper fit and making comments to deliberately try to harm the entire party is not acceptable behavior. In fact, that he has been high up makes it even less so.

If you have been over ruled, you suck it up like a big boy; you don't scream, yell, and throw your toys out of the pram.

One can pretty well assume this is being privately handled now as it should be. I wouldn't want to be on the receiving end when the Eckste gets his hands on Mr. Mack.

Hi Niko, I certainly wouldn't make accusations about anyone being mentally ill unless I had definite proof.

Very possibly pa_broon. The shenanigans of the labour lot are well known over this side of the country too.

I meant he should be severely reprimanded for his behaviour George. As pa_broon said tantrums which become press releases isn't sensible behaviour.

"I meant he should be severely reprimanded for his behaviour George".

Well, as I understand it, he has passed as a council candidate and Westminster candidate.

I have put myself forward as a candidate also, but my process isn't finished yet.

I am the person who proposed the Scottish National Police and Fire Service to the SNP National Aseembly,in Perth, 4th September 2010.

I don't know where this myth comes from, that Labour need Scotland to win elections.

The last three Labour terms, they had a majority in England.

Do the math. The majority of Scottish Westminster seats never change hands. With the number of seats being reduced, it means more than ever that Scotland's input into Westminster elections means nothing. We might as well all stay at home.

George, maybe he passed but to call any of his colleagues mentally ill is pathetic behaviour and not one any serious party should tolerate.

Labour have needed Scotland in the past - very much so. I agree in recent years they have achieved marginals in England but that's only been the past 20 years or so - the time the Scottish branch started to treat their voters with more disdain than ever.