A Lack Of Respect For Authority 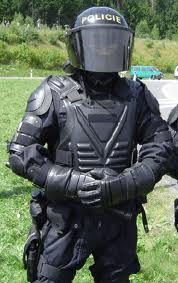 The BBC and Sky News appear to have been in their element the past couple of days having cameras and reporters in various parts of London. Overkill is too kind a word to describe their delight at witnessing violence and their overpowering enthusiasm when they sight a burning vehicle.

Most of the looting and rioting thugs appear to be youths hell bent on causing trouble. It's pathetic to see them goading police and causing destruction to businesses, some of which may not survive due to their actions. Since Saturday night those intent on criminal behaviour have become more and more daring because police seem totally unable to control the situation, even though the numbers involved are tiny in comparison to the demonstrations, which also had their fair share of thugs joining, in London earlier in the year

The rioting late on Saturday night initially may have been in protest about the shooting of one individual but now it's purely mindless violence organised Blackberry and Twitter. Last night on television I saw young men smashing their way into a business and removing various large items, while the police stood observing a few hundreds yards away. Their hands are tied by the politicians who refuse to use water cannon or rubber bullets in riot situations.

Inspector Gadget says 'we know that elitist governments always bring riots.'  An emotive comment, but maybe it has a little truth. One slightly concerning statement he makes is he expects more riots and disorder over the next few years. If police are unable to deal with a few raging youngsters smashing the windows of a small shop, there's little chance they are prepared for further riots. A vast amount of public money is spent on our police service yet it is not meeting the requirements of the majority of the population. Recently I said the police needed reorganisation and that is evidently more urgent than ever.

Eamonn Butler suggests David Cameron's idea of making Bill Bratton the new Commissioner of the Met is inspired and that is another sad reflection upon today's police force, when we can't produce 'home-grown' senior police officers who have enough skills to take charge of London's policing. The evidence shows Mr Bratton turned around crime in New York but would it be acceptable to have an American citizen in charge of the largest police force in Europe?

An accurate description of recent days would be 'a lack of respect for authority'.  Is it any wonder people have lost respect for officialdom when fraudulent politicians are given minimal prison sentences while an 85 year old war veteran is given six months for making an audio recording in court?  I'm sure most of us can think of plenty other  examples of 'justice'.

If David Cameron and his sun-tanned colleagues can't understand the frustrations people feel about secret courts, children being removed from families without good reason, the seriously ill being denied live-saving drugs - to name but a few - small injustices we hear of regularly, then there's no point in any meeting to discuss the present situation in London.

Respect is a two way attribute. When one side shuns the unspoken agreement, as has been gradually happening over the past 20 years, the other side eventually breaks. Hard working, law abiding communities are being destroyed by vicious thugs whose only aim is find cash and alcohol.  They have no respect for anyone.

The politicians are completely out of touch on this. I bet Cameron absolutely hated leaving his lovely villa in Tuscany.

Like many, I stayed up into the small hours watching the scenes in London and other cities unfold before me on the TV screen.

But we have to ask ourselves – Why?

As I sat in front of he TV, I could not help but be overwhelmed by the thoughts that what I was watching was in many ways akin to the fall of the Roman Empire.

Whilst the ‘Patricians’ relaxed and enjoyed the pleasures of their holidays, back home the plebs, the slaves and the under-classes were revolting, committing dreadful acts of riot and arson.
All the while the ‘Praetorian Guard’, the Met, were overwhelmed and could do little more than stand and watch, and without strategic leadership were totally unable to protect society and its property.

Now the ‘Patricians’ come rushing back to mouth their platitudes, but this is not true leadership, this is merely reaction.

Our society is sick, an obvious festering sore has now opened – and with fresh eyes and an open mind we have to ask why, and how do we cure it?

Cives romanus sum - Mmm - there is little pride in that statement today.

"Our society is sick, an obvious festering sore has now opened – and with fresh eyes and an open mind we have to ask why, and how do we cure it?"
You're gonna hate this. A genuine, not platitudinous return to old fashioned values. That includes draconian punishment for criminals including the death penalty. Those same values must apply to all sections of society. MPs and Mandarins, more so.

There isn't any social or economic reason for this. It is simply criminality which has always existed and, given the opportunity, will run riot as we've seen.

The police need to stop being a 'service' and return to being a police 'force'. They need to enforce the law, use batons and water cannons as they do in NI, get rid of these 'no-go' areas and stop consulting with 'community leaders' over the best way to police an area.

If any good comes of this, it will be that a lot of people have had their eyes opened and will be far more receptive to the changes that will be required in this country.

"When we can't produce 'home-grown' senior police officers who have enough skills to take charge of London's policing."

"Would it be acceptable to have an American citizen in charge of the largest police force in Europe?"

Unfortunately the entire upper level of the UK police force is infested with Common Purpose "graduates", so they will all be as useless.
Therefore the suggestion of importing someone from overseas may not be such a bad idea...

Deaths in police custody since 1998: 333; officers convicted: none

The Syrian solution could be quite effective.

How about they use paintball guns and then arrest anyone covered in paint?

Or we could just shoot the bastards.

This is not about revolution or protest against the government - it is about lazy thieving bastards helping themselves. The police need to get tough and do whatever it takes.

I see that you quote Inspector Gadget
but have you looked at the comments on his blog . If they come from police officers then they are disgusting , to call a man that their collogues have just murdered " an oxygen thief " speaks volumes about the thugs in uniform .

And your evidence that he was 'murdered' is?

He was carrying a loaded firearm.

Gangstas like that don't usually hand it over after a polite request.

The politicians are completely out of touch full stop Michael.

John, I gave up watching because I couldn't believe the police were just standing watching youngsters destroy people's businesses without taking any action.

Indeed, it's reactive and not proactive. We spend billions on policing and their training. It certainly doesn't show.

As far as I can gather, 12+ hours later, these youngsters were amazed they were being allowed to do what they like and that's why it has continued. The stupid are being led by the criminal gangs.

I'm not sure I agree with the death penalty in all cases OR but I can support your trend of thought.

Yes microdave, I'd agree the culture's all wrong but the personnel have to change if we want the culture to be better. CP individuals are brainwashed and will never change.

I disagree with shooting Dioclese but the paintball idea is a good one.

That's true. They're mainly youngsters intent of thieving. No it's not revolution at all, just purely criminal behaviour because nobody stopped them.

the doctor, I haven't looked at the comments since early this morning when I wrote the piece. I don't always or often agree with IG but his view is worth reading.

This headline is brilliant , I sincerely hope it is the only type we see

Thanks Elaine, it made me smile. we can't be too complacent though about these riots because most of them have been organised by criminals using mindless thugs and we have both up here.

A lighthearted and giggly chat with the looters from the BBC. Probably not good for your blood pressure SR....

I broadly agree with you!

There are issues we need to consider not least why so many problems between youth and police and gang culture.

Here is my take on the matter http://ghmltn.blogspot.com/

Not all youth should be tarred with the same brush GH but there are problems between them and police. Have always been I think - throughout my lifetime anyway.

It's the gang culture and lack of cause and effect, which most of my generation learned through sharp discipline in the home and school.