It's Time Dave Sorted This Out 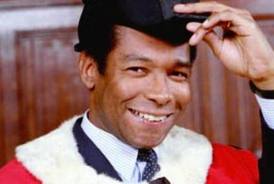 Lord Taylor, a Birmingham born former barrister, was jailed for fraud this week.  He lied under oath about his expenses and a jury decided he was guilty.  Another Tory peer was found to be fiddling the taxpayer to the tune of £14,000 this week and will be sentenced shortly.

As a lass, in my naivety, I respected members of the House of Lords. They appeared as distant pillars of society who would do nothing but good for the masses.  I felt safe in their hands because they silently conveyed they knew what was good for me before I did and passively I accepted their words as the truth, the whole truth and nothing but the truth.

How some things change in a couple of decades. No longer is the Lords full of hereditary peers who consider it their duty to give some of their time to public service, but it's now overstuffed with not only the great and good but the not so good and the bad.

Life peerages are not technically an 'honour under the Crown' and cannot be withdrawn once granted, with the exception of treason covered in the Titles Deprivation Act (1917).

Surely it's long past time that new legislation was introduced to disrobe any life peer who has been found guilty of a criminal offence and given a jail term. I understand other titles can be removed by Royal consent and this would appear to be a reasonable deterrent.

It's time Dave sorted this out.
Tweet
Posted by subrosa at 09:21

Yep. Of course if they were an elected senate we could trust them never to fiddle their expenses at all.

You know this just might be the sort of thing Dave might sort out. It's easily done, probably little opposition and it seems fair. Of course it could prove to be tricky with some of his family and mates but then there are always "bad uns" in the mix and the good would be happy to see those that tarnish their position sorted out.

He'd get a few soundbites out of it. A few column inches and maybe a few well dones along the way.

What larks. You know when I think about it I'm not sure Dave got it right when he got that cat to keep rats out of Downing Street. It may well have failed. Perhaps a bigger cat might do it though?

Dave couldn't sort pennies from a piggy bank. He's too busy declaring how generous the UK is on his overseas aid tour. Phone banking accounts for Pakistani terrorists and millions on schools to India that never improve.

John, at least then we could remove their title. Surely?

That's right petem and I'm surprised Dave hasn't done anything by now. In fact it's not only Dave is would support this. Let's not forget many MPs think themselves superior to us.

He is very busy Sue. I didn't hear about bank accounts for Pakistani terrorists. Did I miss something?

I think once upon a time people assumed that the great and the good were just that.

The press colluded with the establishment, and of course the BBC, to continue the myth.

But of course, someone a very, very long time ago said that power corrupted, and of course it does.

But unlike previous days, we no longer live in a world of deference to those and such as those. Now we realise that the royals don’t have blue blood, and eat and sleep and blow their noses; get athletes’ foot, and piles just like the rest of us, we feel less inclined to keep their indiscretions quiet. Many people used to know what went on in the bedrooms of the great houses; the servants did, but they didn’t gossip about people who were “better” than they were.

It’s about equality now. We get into trouble when we do stuff that is wrong; why shouldn’t they? And of course it’s about the fact that it sells papers if we hear that Prince Andrew has been begging for money for his ex-wife, with whom he still lives, despite having sold their home to a rich Russian for millions more that the asking price!!!! But it’s more the sensational nature of the story than the risk to security or lack of business probity that is of interest.

There are long lists of lords over the centuries who have lied cheated and stolen their way through the world, living off others who actually had the talent to do things. Even today none of the hereditary peers have been charged with anything, because the police just can’t get there. But for certain Viscount Falkland stole expenses by saying he lived at his wife’s aunt’s house down in the country, when in fact he lived at a smart London address. And in typical aristocratic style, when challenged about it he said that he needed the money to maintain his lifestyle.

I don’t think that just because most of today’s riff raff lords have no breeding, it makes them bigger thieves than the hereditary lot. They all live off us and most do pretty much nothing most of the time, the better to cheat us.

Of course someone should bring in some law that means the Queen can strip them of their title when they are convicted of an offense. It is ridiculous that they do time and come straight out and back on to a red bench for £300 a day. Lord Invergowrie comes to mind. An arsonist who set fire to the curtains in an hotel because the bar staff wouldn’t let him have more drink, came out of clink and went back to the lords where he has made one intervention in years and collected expenses for most days that the place has been open. Good drink money!
Cameron should get on to it. It’s probably much easier than some of the other problems that he faces, and he likes easy, because he’s crap at difficult!

Dave isn't going to sort anything out. He's a waste of space.

So Lord Taylor was sent down, and him a barrister – let that be a lesson to all peers – if you are going to fiddle your expenses – do it properly. Didn't they teach him anything.

As for Mr Cameron or any at Westmonster actually sorting out this whole debacle – it will never happen.
They all have one eye on their future, and no doubt regular visits to their tailor for fittings of an ermine trimmed red robe.

People still vote for the troughers.

My parents certainly did Tris although my generation is more cynical. Perhaps it's because we have better access to information.

It's an expensive way of getting rid of them Demetrius.

You're right Michael. He's a salesman not a PM.

Oh we can be assured they'll do it properly in future JRB. The rules will be bent 359 degrees.

CH, it's links like yours which show us how ridiculous the whole system is.

Actually, the doctrine of Parliamentary sovereignty means that individual Lords could be deprived of their titles very quickly with a short bill to revoke the letters patent which created the peerage passed by both Houses and given Royal Assent. The Representation of the People Act 1981 would be a good template for legislation to skin (in the sense of removing their ermine) peers without individual Acts. But Parliament doesn't want to acknowledge its dirty linen let alone wash it in public.

Hello Brian. You're the second person to suggest that Act as a base for change. Thank you for the link.

Sadly I agree nothing will be done but we're responsible because we're unable to pressurise these people into action.

It seems as soon as some politicians win a seat they close themselves off from their electorate or are too worried about their future careers to have words with their leaders.