The Dark Side Of The Internet 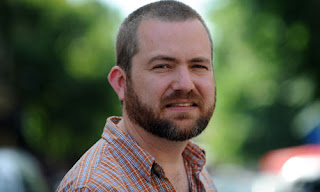 This is the man who thought if he used the hospitality of Edinburgh University's computer system to deceive it was fine. Tom MacMaster, a 40 year old married man, is an American studying in Edinburgh, where he decided he would start a blog claiming to be a gay woman activist in Syria.  His blog became a 'success' with a worldwide readership of thousands.

He gave no thought to those in Syria who were trusting enough to believe him/her and went as far as posting the 'arrest' of his creation.

He gave no thought to any implications his blog could have in the Syrian gay community and of course, from the comfort of Edinburgh, he gave no thought about the Syrian security services who would be checking out blogs like his with a fine toothed comb.

This post on his blog shows how deluded he is. 'However, I have been deeply touched by the reactions of readers'. Rather egotistical.  Why he behaved as he did doesn't interest me as I've no desire to forensically examine the mind of this individual, but it was amusing, if not a little sinister, to learn the lesbian with whom he had a 'relationship' - with the full knowledge of his wife - turns out to be a retired US Air Force pilot.

What damage MacMaster has caused to individual Syrians will be revealed in time, but he's certainly done damage to the reputation of Edinburgh University, albeit only by association. The university has suspended his computer privileges while they investigate whether he has breached the university computing regulations.

It's to be hoped their investigation produces a positive result.
Tweet
Posted by subrosa at 09:17

Heaven knows what prompts somebody into being so deceitful. I know most of us are anonymous but we don´t create whole alter ego´s. His actions paint him as quite mentally disturbed.

Aye Sue, there's certainly something wrong with his opinion of his fellow man. His wife's as bad really as she knew all about it and did nothing to discourage him.

Exploiters of the worst kind.

If there is one bit of good to come out of this debacle it is that perhaps internet bloggers and commentators are now showing a degree of self regulation.

As Sue says we all, in our own way, hide behind our username or avatar but we are never openly and deliberately hurtful or deceitful to one and other.

Mr MacMaster has taken his blogging more than just a step too far.
The consequences of the words he published on his blog and the deceit that surrounds them, could have real and significant implications on the lives of people living amidst turmoil.

Amina Abdallah Araf al Omari, or Tom MacMaster as we now know him, is apparently a mature American student studying at Edinburgh for a masters degree. He has demonstrably failed to behave in any form of ‘mature’ manner.
Perhaps Edinburgh University should set an example and remove more than just his computer privileges.

This reminds me of American humourist P.J. O'Rourke's observation : "The internet makes it possible for almost everybody to publish his/her thoughts and the results show that almost nobody should." (As near as I can remember).Should we,however,be surprised in the wake of the revelations of bogus identities on social networking sites that this sort of thing happens ?

The 'bearded lady' will have put a lot of folk in danger.
I read elsewhere that it's alleged his wife works at St Andrews Uni and is partly paid by a grant from Syria. All a bit murky. Our Universities seem happy to take cash from anywhere.

On lighter news I read that a new mini ice age is approaching. That should put a block of ice amongst the green loons. Just as our last power station creaks to a stop and we're totally reliant on windmills outside temperatures will be dropping like they were in the last mini ice age in the 1700's. Freezing....

Sue:- "Heaven knows what prompts somebody into being so deceitful." - because they can, and, it's so easy.

As far as all MSM & Internet articles are concerned: cave lector / nullius in verba

Too many people believe everything on the internet without even a second thought.
In this case, surely the blog readers might have considered how a person in Syria could manage to run a blog of this nature, and whether anyone would actually do so in view of the potential penalties.
It's strange how large numbers of people accept everything on the internet as being factual - my son-in-law, a university professor, was recently told by one of his students that he must be wrong in what he had told his students, because the internet said something different! Similarly, there is the belief that if something can't be found on the Internet, it doesn't exist.
I think one of the first computer lessons to be given in schools should be on the subject of credibility; people accept things on the internet that they'd never accept if told face to face.

PS I'm really only 14 years old and impersonating my granddad!

As to a suitable punishment for the boy, well it would be overly harsh to kick him out of Edinburgh University but a good healthy stint of unpaid work in the Estates Department will help him focus.

Ah JRB, I see you understood my 'positive result' comment.

All of us are wary online but this man exploited many, not only intellectually but in a sexual manner.

I shouldn't think he'll be staying long in Edinburgh. His wife attends St Andrews and they say they are taking no action.

Perhaps she'll return to the US with him.

Ian I'm not surprised in the least because we know it goes on minute after minute, but for a person in his position it's wrong he's abused others - enough to put their lives at risk.

When people are in unstable situations they cling to anyone who offers help. That's where he committed the abuse.

But no, I'm not surprised. I'm sure there are many thousands out there right now saying they're someone they're not.

Yes I read that too RM but not that she was partly funded by Syria. I'd like to think our universities aren't so desperate.

Aye it's all very quiet on the climate change front isn't it. Renewables seem to be the political speak right now and they have some real problems too, as you say.

That reminds me of a post I must do for morning. :)

It's too easy Joe because we assess much from physically seeing someone. Years ago I worked with a woman who said her mother always judged a person's character from their voice. Her mother was blind.

On the internet it's a gut instinct I think don't you?

EP, I haven't read his blog, on the post to which I linked. I believe he said he travelled back and forward to the US and hence he was able to post as he did.

That's very true though EP. I had a friend go to her GP with a file of paper about an ailment she has. The GP said he wasn't interested and she was upset. When I explained I too would have been upset she started to listen. Much of the info she'd printed off was 'alternative' medicine information which I told her could well be poor in quality.

It's such a pity 'new' computer users aren't taught basics about websites. But then, I doubt if we were and we've learned the hard way.

I don't believe you. I think you're a lively pensioner who has all his wits about him, even though he can't run a 4 minute mile these days.:)

I liked that too CH. Just read it a wee while ago.

Mind you I prefer to see Edinburgh Uni take a firm stance.

He was questioned a few times as to why his ISP address was always pointing to Edinburgh and he told his supporters and contacts that it was because he used a proxy server.

RM I missed that. You're a far better researcher than me. Fancy a job? No pay but some satisfaction. ;)

I can't get no....satisfaction . I feel a song coming on :)
Yes tell me what you want to find out and ( weather permitting - might be playing golf) I'll get onto it like the grumpy old sleuth that I am.

No hope for my golf that's for sure ;)

I'm told practice is essential RM, not that I'm a golfer. I encourage the practice of course because it's fine to get the house to myself for a while. :)