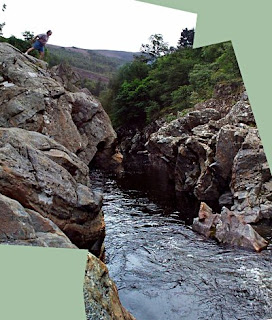 In 1689, during the Jacobite Rebellion, the Battle of Killiecrankie, Perthshire, was fought on the northern edge of the village.  The Highland charge of the Jacobites took the government forces, under General Hugh MacKay, by surprise and they were completely overwhelmed in only 10 minutes.

Donald MacBean, one of William 111 of England's supporters, having lost the battle, is said to have cleared the pass from one riverbank to the other at The Soldier's Leap (pictured).  Even though the battle was disastrous for the government forces, in reality it was the end of the insurrection, because the commanding genius of the rebellion, John Graham of Claverhouse, Viscount Dundee, was killed in the battle.  The following month the Jacobites were soundly beaten at the Battle of Dunkeld.

The sun going down caused the Highlandmen to advance on us like madmen, without shoe or stocking, covering themselves from our fire with their targes; at last they cast away their musquets, drew their broadswards, and advanced furiously upon us, and were in the middle of us before we could fire three shots apiece, broke us, and obliged us to retreat.
Some fled to the water, and some another way (we were for the most part new men). I fled to the baggage and took a horse in order to ride the water; there follows me a Highlandman with sword and targe, in order to take the horse and kill myself. You'd laught to see how he and I scampered about. I kept always the horse betwixt him and me: at length he drew his pistol, and I fled; he fired after me.
I went above the Pass, where I met with another water very deep; it was about 18 foot over betwixt two rocks. I resolved to jump it, so I laid down my gun and bat and jumped, and lost one of my shoes in the jump. Many of our men were lost in that water.

Many say that MacBean couldn't possibly have leapt 18 feet across the river, but I've visited this area several times over the years and if I had a claymore-wielding, adrenaline-fueled Jacobite chasing me over such barren ground, I'd give it a go too.

The National Trust for Scotland now own a large section of the riverbank and have joined forces with Highland Fling, an adventure tourism company, has finally been given the go-ahead to build a permanent bungee-jumping platform under the Garry Bridge (pictured below) - Scotland's first bungee-jumping attraction. The 120 foot drop into the River Garry's eerily beautiful gorge will cost £80 a head. 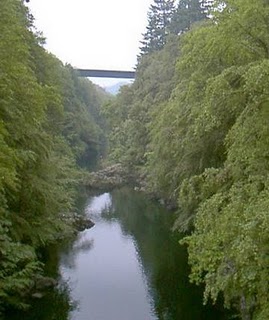 Murray Trail, the New Zealander who owns the business, expects the first official jump to take place on Friday 13 May and it is open to those thrill-seekers over the age of 14.

I wonder what Donald MacBean would think about anyone who chooses to dangle from the end of a reinforced piece of elastic without the screaming of a raging Jacobite at their heels.  It could be he'd think they were just as daring as himself.
Tweet
Posted by subrosa at 19:59

Does someone have a death wish, Friday 13th.

18 foot is possible if say he'd dropped any and all of his equipment.
He wouldn't have even had to land on his feet, simply be in a position to climb up to the other side.

As for bungee jumping, I'd love a go at that :-D

Out of interest I had a quick look at Wiki:

We appear to be leaping distances of 29 feet or more, but these are trained athletes, not soldiers running away from soldiers.

Even so, with a helping shove from our friend Mr Adrenaline, 18 feet seems doable.

Not that I would try it.

The bungee jumping is something I wanted to get done before I shuffle off to whichever sheltered housing project will put up with me.

William II of Scotland as well from 4 April 1689, reigning jointly with Queen Mary.

Why Oh Why must everything be reduced to such a base level?

Why do we have to turn this lovely scenery into a noisy, brash adventure playground for a few thrill seeking individuals?

Can people no longer enjoy this scene of natural beauty, tranquillity and with its sense of history, purely for what it is?

Let them go tie their bungee rope to some man-made urban construction.

I am greatly disappointed in NTS for even giving this insane idea a moment’s consideration.

I'm rather with JRB on this. I'm sure there are places that are not tranquil, unspoiled and have beautiful scenery where people can bounce around on elastic to their hearts content and disturb nobody
I guess this is one bit of Scotland I will be avoiding.

I guess your free publicity will earn you a complimentary "free" jump SR.

Hi SR, Why not make it interesting , for the spectators. Put a few 'gators in the river below the jump, run a book on the result.

You're on the ball CH. :) I was going to mention that but thought I'd be showing my age.

The date coincides with a large cycling competition so it's hoped there will be plenty takers.

QM if you come up here to have a go at this one let me know.

You too CR, if you come this way to do this get in touch.

Yes you're right Brian. I hope others note your comment.

This has been on the go for a couple of years now JRB and I certainly don't think it's a good idea. The road is narrow and the gorge quite beautiful. Where the cars are going to park I've no idea as the NT site is small.

Auch Woodsy there's some beautiful scenery less than a mile from it and also in that area some fantastic architecture in the form of Hydro electric stations.

Joe, I'll go past the place as fast as I can enroute to the House of Bruar for my bi-annual browse.

They wouldn't survive in that water Apogee, it's fairly fast in places.

I'm with JRB too, surely there are plenty of wind turbines in Scotland that could be used for bungee jumping?

He'd think they were as crazy as...

And thanks for dropping by my blog, Rosie. :)

When my next novel is out, you'll get a copy for your Kindle app.

Now the Lib Dems want to gift control of the Royal Bank of Scotland to people on the English electoral roll:

From The Herald:
“This could make for a new Parliament in May comprising Labour with 13 more seats on 59, the SNP down eight to 39, the Tories and LibDems down five and four respectively to both share 12, the Greens up from two to six and with one independent.
Despite likely Green support for a coalition, Labour leader Iain Gray may still opt to attempt minority government.
… TNS-BMRB have changed their methodology this month and instead of responses recorded by the interviewer, a computer was handed to respondents to input answers themselves, making it closer to the secrecy of a ballot. It is not known whether this will have influenced results.”

The jumps would be subsidised banned?

Auch Jeanne, that's kind of you but it was a pleasure to try to help. Let me know if there's anything more I can do.

Am I being dim wittied here Stuart. Haven't taxpayers already bought into RBS? Why would you do it again?

Mmm Stuart, not unexpected this poll is it?

I think we've had as much positivity about the SNP as we're going to get now.