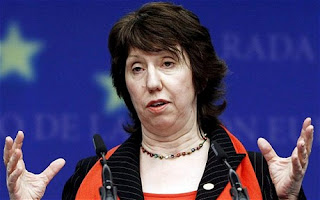 It's not often I attack the personalities of politicians but Baroness Ashton is an exception along with the Honest Haircut: two people who, in the positions they hold, are completely out of their depth.

However this post is about Lady Ashton, Vice-President of the European Union, who is shown (above) attempting to inspire others to reach the dizzy heights of EU High Representative for Foreign and Security Policy.  Recently she was criticised for not ensuring the post of special EU envoy to the Middle east was filled after Marc Otte, who held the post since 2003, was not replaced when his term ended this week.  Her excuse was that she is considering whether or not the post is necessary and it wlll probably be several months before she makes her decision.

Shocking as this may seem to those who follow EU matters, she has a strategy which is to take the Middle East dossier into her own hands. Considering it's reported that she is close to the 'special envoy of the diplomatic Quartet in the Middle East' that's no surprise.  Tony Blair knew what to touch and what to avoid.

The Lady's latest spendthrift project will cost £8.5 million on polishing the image of her diplomatic service.  The money will be spent to:

"llustrate to the general public the increasing importance of the role of the EU as a global actor in peace building and crisis management".


Also a tidy sum will be allocated to supporting networking activities which means VIP visits, receptions and lengthy lunches and dinners.  Her spokesman said:

"This money is spent providing basic information on what the EEAS does. It is not for propaganda or to influence anybody. It is work which cannot be done in-house, for resource reasons. This is about providing information on a new EU service in 27 member states and across the globe. Looked at objectively, it provides good value for money."

This woman's professional behaviour spawns such fury within me; so much so that I realise I have a loathing for someone I have never met. Prior to her arrival on the EU stage, had anyone said it was possible to loath a stranger I would have been the first to contradict them, but Catherine Ashton has proven me wrong.  She contributes nothing to the political world other than redefine the words greed and incompetence, yet she is still in office.  Surely there is someone in the whole of her European External Action Service willing to knock her off her pedestal.

Spot on and well said
Gildas the Monk

Kitty Muggeridge once remarked about David Frost, "He has risen without trace".

Change the sex and the same sentiment could be applied to Baroness Ashton without difficulty.

It's the career path of someone who's kept their nose clean and their party card shiny. You'll also note it's a career path which has taken her into government without the bother of ever having to get elected.

1977-1983, Campaign for Nuclear Disarmament (CND)
1979-1981, Business Manager of The Coverdale Organisation, a management consultancy.
1981-1983, Central Council for Education and Training in Social Work.
1983-1989, Director of Business in the Community working with business to tackle inequality
1989-onwards, Worked as a freelance policy adviser.
1998-2001, Chaired the Health Authority in Hertfordshire
1999, Made a Labour life peer as Baroness Ashton of Upholland at the advice of Tony Blair.
2001, Appointed Parliamentary Under-Secretary of State in the Department for Education and Skills.
2002, Appointed minister for Sure Start in the same department.
2004, Appointed Parliamentary Under-Secretary in the Department for Constitutional Affairs
2006, Privy Council
2007, Parliamentary Under-Secretary of State at the new Ministry of Justice
2007, Gordon Brown appointed her to the Cabinet as Leader of the House of Lords and Lord President of the Council
2008, EU Trade Commissioner
2009, High Representative of the Union for Foreign Affairs and Security Policy.

The thing that surprises me is that her appointment was agreed by 27 other EU leaders which either means that it's a nonsense post for a nonentity which is used as a reward for political lackeys across the EU nations or that if the national leaders' brains were dynamite they wouldn't blow their ears off.

You will be relieved to know that she does not shine brightly in my firmament.

A budget of £30 million should cover it.

Why, thank you Gildas. Much appreciated.

It shows the EU for what it is Doug and we need to start considering how much of the EU we need in an independent Scotland.

A mere bagatelle Francis. Sure you wouldn't prefer a little more?

A prime example of a jobsworth who has risen through the ranks of welfare dependency as practised by bureaucratic nonentities who proselytise on democracy while practising tyranny.

A perfect example of the EU shamocracy.

Catherine Margaret Ashton, Baroness Ashton of Upholland, PC. – as Queen of the Quango’s she is unelected, unaccountable, and totally ineffective.

One wonders what services Cathy Ashton rendered to these politicians to earn such high office? – perhaps that question is best left un-answered!

Still there is one redeeming fact relating to Cathy Ashton – she owns a full size replica Dalek – apparently a gift from her husband.

Those whom Burlusconi appoints may have a similar level of incompetence, but at least they're easier on the eye.

Dalek - a mutant intent on universal conquest and domination without compassion, fear or pity. How does her husband tell them apart?

Is she drunk? She looks positively demented, and her drivel proves it. What planet are these mutants from?

The lady JoeP links to is only a list candidate to be an MP rather than VP of the EU but I take the point about Burlusconi having an enviable eye for the ladies.

Do we really think that the dental hygienist (again, to take that link) would be a worse DefSec than Hoon, or a more duplicitous Climate Scam Minister than Huhne, or a more incompetent PM than Brown?

Sack Ashtray and replace her with a Burlusconi Babe. At least they've stood for election.

She has never held a real job doing anything commercially or economically useful. It shows!

One does wonder John and the sadness is that having the likes of her in such a position taints all British politicians.

Ah Joe, beauty is in the eye of the beholder remember. :)

He's possibly not too concerned Clarinda as long as the cheque goes in the bank every month.

The photo doesn't do her much good does it Bunni and the one on her website is airbrushed to within an inch of its life.

Mr Italy is kind to women though ASE. Maybe there's a lesson there for British men. :)

What surprises me Woodsy is how did she get the jobs she has. How qualified is she?

Hi SR.JRB asked the same question I would like an answer to, with a "career" that Doug the Dug relates from wikipedia for her, just what the hell DID she do to get a peerage ?

She didn't rock the boat Apogee and said yes at the appropriate times. I can't think she undertook a career Holywood style. :)

Hi SR, I would agree with you regarding her being unlikely for a Hollywood style career, still she must have something going for her, or she knows where a lot of bodies are buried. And there are some strange people in politics.

RM email when you can please

There are plenty yes people in politics Apogee and I think she fits the party machinery's perfect member quite well. Apologies about the spelling of Hollywood. :)