Iain Gray - A Man With An 'Honest Haircut' 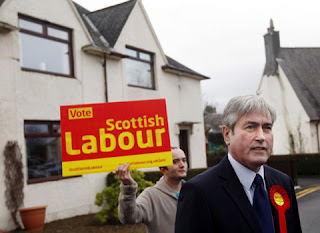 Iain Gray, in a desperate bid to be the holder of title of First Minister, gave an interview to the Observer this weekend.  I describe his bid as desperate not just because of his pedestrian performances at FMQs but because the interview is riddled with inaccuracies.

'...When they took over, the jobless total in Scotland was lower than anywhere else in the UK; now it's the highest...'

When the SNP took over the governing of Scotland Mr Gray's party in Westminster was throwing money right, left and centre and creating 'non-jobs'.  I know someone in a non-job and she's appalled by the waste of money and extraordinary salaries given to those with limited abilities, in her organisation.  The organisation was set up by the previous labour/libdem government to reduce the jobless totals. A fake charity. Of course the jobless total will increase during a recession.  The SNP has announced a Youth Employment Scotland package yet it's not enough for Labour. They want every young person with appropriate qualifications guaranteed an apprenticeship and also propose that any small business prepared to create a new job for a young person unemployed for over six months will be eligible for the scheme (my italics).

'Appropriate qualifications' is a get-out phrase and asking small businesses to create jobs will create a return to the Youth Training scheme where badly run training provider businesses exploited trainees (now to be called apprentices).  In defence of the YT scheme, there were professional training providers who successfully arranged training and authentic work placements, resulting in many thousands of young people entering full-time employment, but they were few and far between.

Several of their flagship manifesto promises have had to fall by the wayside, such as the student debt issue, policemen on the beat and lower class sizes,


The SNP government has ensured that further education is free at the point of access.  I'm surprised Mr Gray disagrees with that.  As for policemen on the beat his comment is untrue.  But he knows that - he's been told it often enough at FMQs that we have an extra 1000 on the beat.  Could it be his sympathetic journalist had lost concentration by then?

' ...and no matter how they try the release of Abdelbaset al-Megrahi, the man convicted of the Lockerbie bombing, just won't go away. Nor, inconveniently, will he.'

This remark is derisory.  Last week Mr Gray was nowhere to be seen and Labour's incompetent justice minister was given full reign on the MSM. It was impossible not to wince at the man's discomfort.

There are reports of problems within the Scottish Labour party and the breathtaking exposure that Labour's manifesto pledges haven't been costed.  Is that why Mr Gray never talks policies and spends so much time personally attacking Alex Salmond?

Is anyone else becoming weary of his continually reference to his years working for Oxfam?  Many of my generation gave a great deal to Oxfam when we were younger but none of my friends does now.  We were disgusted to learn how little of their income - from our unwanted belongings - was being spent on 'good causes'.  Iain Gray will have been well rewarded for his work as it's now widely known that Oxfam employees were, and still are, paid handsomely.

Last, but by no means least, can anyone describe an 'honest haircut'?
Tweet
Posted by subrosa at 09:26

The more oxygen of publicity Ian Gray gets the better. His lack of ability and honesty will hopefully become apparent to all.

And the latest opinion poll is telling us the May election is going to be very close.

Rosa -The 'honest haircut' phrase is used to describe the vacuity that lies beneath it.

That's my point of view Strathturret. I was told last night not to post this as I was going him 'air time' but I took your line.

Crinkly, what a wonderful definition. It's lifted my mood from sceptical to cynical. Not a great difference I grant you. :)

Hmmm ...nice photo.
The grey men turned their backs on honest labour years many years ago.

I liked the photo too wisnaeme. Good to know Mr Gray is constantly informed which party he represents. :)

Oh voterinscotland, he'll not be seen for dust. Isn't it strange that labour leaders here have a problem coming on the media when such a statistic is published. They run a mile.

I notice that the gentleman makes a habit of "mis-speaks" as it were. They seem to be the accidental work of an idiot. I think he's much more dangerous than that and he should be pulled up every time he "mis-speaks" but the dozy old MSM up here let him get away with it time and again (as does the Presiding officer I notice). An excuse for the Observer maybe is that since they don't pay a lot of attention to Scotland, they may not realise when they are being "mis-spoken" to. Then again if the journo was a Scot, there should be no excuse other than the usual bias.

Dram, the journalist should have checked out Gray's statement with the SP. Then again it does show how Gray and his cohorts get away with lies.

Yes he is dangerous. That's the price we pay for people having their heads in the sand.