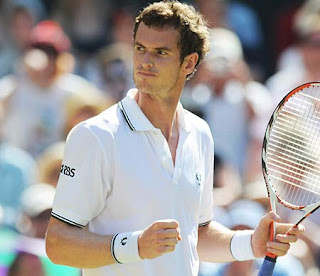 Tomorrow morning at 8.15 BBC1 will broadcast live the final of the Australian Open as Andy Murray takes on Novak Djokovic.

Kevin Mitchell in the Guardian gives perhaps one of the most accurate descriptions of Andy Murray I've read:

There is nobody else who transmits his internal debate from the court to the gallery with quite the intensity that Andy Murray does when he plays his delicate yet powerful tennis.


The pale Scot with a face of transparent anxiety will keep his audience in a state of suspense...

He can do no more than his best on the day. I would like to wish him my best wishes in the traditional Dundee manner - gaun yersel' laddie. Along with thousands of other Scots I'll be clapping, sighing and willing him on.
Tweet
Posted by subrosa at 17:12

A Scot's historic victory or a British gallant defeat!

Although my blog picture of him when I posted an item about Andy wasn't very flattering, I did say that he's the best we've got.

That's the best in Britain Subrosa...you can't just keep him to yourself. :)

Good luck to him tomorrow.

Andy Murray's been in two semi-finals and two finals.

Aye he is the best we've got and he gives value for money too.

I'll be a Scotswoman tommorrow.

I've bought my favourite sausages to have a sandwich if he wins Foxy. Isn't that sad? :)

Remember now, it's 'gaun yersel' you shout as a Scotswoman.

So sorry for Andy today. I'm thinking there is a psychological problems developing in finals for him. He needs to get help for that. To lose without winning a set says to me his head is battling with his game in finals like this. Its painful to watch.

There is no doubt he is the best we have incidentally: there is also absolutely no doubt that he is a far superior player to Henman at his best. I actually find former players commenting, players who have never won a tournament in their puff, pretty irritating. Henman and Lloyd never possessed the talent Murray has or clocked up the wins against the top seeds that Murray has under his belt. John Lloyd was best known for being married to Chris Evert for heavens sake. Becker, Borg, McEnroe and co can say as much as they like - they're entitled.

Completely agree with you Jo. He seemed just so intimidated with the occasion. Perhaps it's because he does have a quiet, shy personality and I agree, he needs help to build his confidence because he definitely has what it takes skill wise.

I turned off the BBC. Listening to Henman and co rattling on. Henman never made a grand slam final in his whole career.

Well the Times are having a right go at him today Subrosa. Very sad. They are saying at 23 if he hasn't won a Slam tournament he never will. What a bunch of clowns they are.

I think there's a very small window of opportunity for Andy Murray and it's getting smaller. It's unpalatable, maybe, but unless he wins a Grand Slam soon, I don't think it will ever happen. As well as his contemporaries, there's a fresh batch of new talent coming through the ranks every year. It only takes one or two to be as good as him and he has even more rivals.

Sport is a very unforgiving environment which is quite right. You either do it or you don't. He's done well, Andy Murray, but perhaps he might never do any better.

I really believe its a psychological thing with Andy and finals. He needs help with that. But it really doesn't help, the day after a loss, that any UK newspaper is slagging him off. His game is frequently amazing and some of the shots he can bring off regularly are sublime. I think if he can get help with his mental approach then he will do it.

That doesn't surprise me Jo, it's now completely a London based paper. You're too polite saying they're a bunch of clowns.

I would agree with Jo William (see below). It's not for his lack of skill that he doesn't win finals.

The man has a very shy personality, that's obvious to all. He really needs top class professional help in boosting his confidence. It's all very well constantly working on his physical ability, but he does need to work on confidence too.

I'd agree with you Jo. He should have had professional help some time ago though because his shyness is still prominent.

Overcoming nerves isn't easy as many of us will agree.

What so many forget is that he's the best tennis player Britain's had since Fred Perry. Was Henman treated like this? No.

I remember when he was starting out Subrosa and he was good but awfy skinny. Watching him develop his training routines and his physique has been interesting because we then saw the sheer power coming into his game as his body got stronger physically.

The skills are definitely there. If he gets the mind part sorted out he will get there. Then when he gets a slam he can tell the media to go to blazes when they want interviews! ; )

I too have watched him since a teenager. As I had connections with Dunblane and teenagers it was hard to avoid his name being in conversation. Especially if sport was mentioned.

Have to agree Jo, he does need seriously good help with his confidence. That's the only problem he has.

As for his constant wiping of the right hand side of his face, I do hope he keeps such gestures. It's becoming in an endearing way.