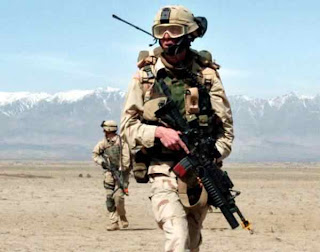 Private Joseva Vatubua, 24, a soldier from the Argyll and Sutherland Highlanders, 5th Battalion The Royal Regiment of Scotland, has become the first British military fatality of 2011 after being caught in an explosion in Helmand province.

He was killed on New Year's Day during a patrol aimed at preventing attacks by 'enemy fighters'.

A total of 349 of our armed forces have been killed since operations began in 2001. David Cameron has repeatedly stated our troops could start leaving Afghanistan early this year yet no mention was made by him prior to the Westminster Christmas recess.

President Obama has already said that the 65,000 US troops will end combat operations this year although many will remain to advise Afghan forces and protect US interests.

The SNP is the only political party which has mentioned the withdrawal of our soldiers this year.  Angus Robertson, the SNP Westminster leader asks, "If the US president can offer such certainty, why are British service personnel being fobbed off with vague commitments?"  Will David Cameron reply?  I very much doubt if Mr Robertson receives anything more than the MP wants most of them home by 2015 so as their presence there doesn't affect his re-election chances at the general election.

This war in Afghanistan is proving almost twice as dangerous as Iraq where there were 179 deaths. When are we going to say enough's enough?
Tweet
Posted by subrosa at 14:03

Now the Wikileaks sh*t is really hitting the fan

To a greater degree than previously known, diplomats are a big part of the sales force, according to hundreds of cables released by WikiLeaks, which describe politicking and cajoling at the highest levels. It is not surprising that the United States helps American companies doing business abroad, given that each sale is worth thousands of jobs and that their foreign competitors do the same. But like the other WikiLeaks cables, these offer a remarkably detailed look at what had previously been only glimpsed — in this case, the sales war between American diplomats and their European counterparts.

I see that Gen Sir Richard Dannatt has an article in today's Telegraph. Basically he's saying we need to stay there for longer because we've been there for 10 years. Usual comments about progress being made, etc.

I'm reminded of Denis Healey's remark, 'when in a hole the first thing to do is to stop digging'.

As always UK politicians will take their orders from 'Uncle Sam'.

Intersting to see how the coalition will play this as the Liberals are pretty sore already and due to get a serious kicking this year. They are I think more dubious of the foreign wars than the Tories (and Labour).

Cameron the consummate PR man can give a quip, witty retort, joke about dwarfs break cast Iron guarantee do 'U' turns which would leave most rugger players floundering.

He can smile into the camera as easily and with the same amount of insincerity he shows when talking about the casualty's born by the armed forces.
(camera zooms in close dave looks into camera gets signal from coulson..tear drop forms and flows down face)

But a Plan is a bit beyond a PR spiv..

Yes Strathturret, I read that. Nobody knows what's going on and that's the shame of it. We're spending £2.6bn I think it is a year on this war and of cost that's just the cost of our military presence.

Another Tony Blair then Niko?

Muddypaws, you're like me and can't find any sensible reason we're there. 'The Taleban' we can read about and they can repeat that forever, but we know the Taleban are now in Pakistan.

Then of course there's oil and minerals.

We should leave these people to work out their own hierarchy and resolve their own problems.

Well yes SR, the nature of the relationship between the Taliban and Pakistan has always been a feature of this story....and a cause for concern given Pakistans nuclear capability.

Most interesting link muddypaws. I do hope others read it.

Quite discerning that it all seems to rest on the opinion of one man - just because he lived there.

Another soldier murdered in the cause of Capitalism.

Time to bring the troops out and the politicians who have abused them down.

We cannot have organised crime syndicates leading us and expect to have legitimacy and justice prevalent in this world; only more criminal syndicates.

Well said RA. That's just what is developing here - organised crime syndicates associating with their cohorts in foreign lands. The US is the largest of course.