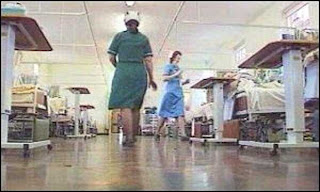 The public inquiry into Scotland's worst outbreak of clostridium difficile has been of interest to me.  A total of 55 patients developed C.diff and 18 died after admission to the Vale of Leven Hospital in West Dunbartonshire.  C.diff was blamed for nine deaths and was a contributory factor in nine more.

On Wednesday the Herald reported the evidence of two daughters of an 84-year- old woman who was put in a room with patients who had already had the deadly infection.  Their mother survived, but they noted that on three separate occasions hand-gel dispensers in the ward were empty.  It was three days before they were replenished. Mrs Jones' daughters also told the inquiry that they weren't informed that other patients in the room had C.diff and they only found out through conversation with other relatives.

Although I appreciate that Mrs Jones should not have been put in a ward with C.diff patients, it would certainly not have been appropriate for staff to discuss other patients with her family.


Mrs Malcolm told the inquiry there was no literature about C Diff at the hospital and that visitors were not told to wash their hands or given any advice on how to prevent spreading the infection. (my emphasis)
Yesterday the inquiry heard from relatives of Walter Scullion, 69, who was admitted with a urinary tract infection.  By the time he was discharged he had contracted herpes from an oxygen mask, tested positive for C.diff and lost 22lbs in weight.  Mr Scullion said his family were not told by hospital staff he had C.diff and they only found out after he told them himself.  Mr Scullion reported other serious breaches of hygiene in the hospital for which there is no excuse.

Walter Scullion’s relatives were also allowed to visit him in his single room without being told to wear any protective clothing or being given any advice on hand hygiene or on how to safely wash his soiled clothing, which they took away in supermarket carrier bags. (my emphasis)

Of course this attitude has been encouraged by the laxity of hospitals allowing visitors at any time of day and having no firm rules about their behaviour.  Visitors should not be allowed into wards unless they do wash their hands and if that rule was firmly applied throughout Scotland's hospitals, the general public would quickly realise that thorough hand washing is the best way to prevent infection.  It does sadden me that so many people rely upon modern gels which are only basic chemical disinfectants.

Mr Scullion has since returned to the Vale of Leven as a visitor and commended the upgrading.  It's all very well having new beds and painted walls, but if patients, staff and visitors don't treat the basic hygiene rule of hand washing, such expenditure is a waste of money.

Hospitals need to provide hand washing facilities at either the entrance to the building or the entrances to wards.  That is where money should be spent long before they think about decor.

Until I see this happening I will continue with my own hygiene system.

I've lost any hope of the public understanding the importance of hand washing. Is it laziness or complacency or a mixture of both?  The answer lies with our hospitals. In European hospitals visitors adhere to a very strict code of behaviour which includes hand washing on arrival and departure. We spend millions on hospital infection control yet permit the public to use hospitals like general meeting rooms.

It's long past time we stopped the casual approach.
Tweet
Posted by subrosa at 11:33

I just wonder why when the basics are not observed by the staff or enforced on the public no one is ever prosecuted for negligence leading to these deaths.

Well said as usual OR. Our schools should be teaching the importance of personal hygiene instead of some of the 'subjects' with which our youngest generation is indoctrinated.

No one is ever prosecuted because there are far too many people involved Disenfranchised. There are hospital staff and the general public who can wander everywhere without question.

That's the problem and it wouldn't be one if hospitals were rigid in their appliance of rules.

and while we are at it what about the wheel chairs, complete with ill people, outside in the court yards and then trundled back into wards because some folk need a fag? Likewise trolleys taken from outside and trundled around the wards?

Sorry but we've not even begun to think about this issue seriously.

Bring back Lysol and matron's with complete power about who and what gets in and out of wards and the power to sack dozy articles who fail their duty of care.

Aye there are lots of issues which are just poor management Dram, but I would say visitors are the first who should be dealt with. Time to have a rigid approach with them. They complain about their family picking up infections. What about the infections which are brought in by them?

Also, we really need to think about individual rooms for patients. Along with ensuite facilities that would solve quite a few problems. It's the sharing of toilet and bathing facilities that cause so many infections. That's when I picked up my c.diff I'm sure.

"We spend millions on hospital infection control yet permit the public to use hospitals like general meeting rooms."

Politicians (+ associated entourages & camera-crew) also perceive them as useful for valuable (to them) photo-opportunities.

Politicians & news-crews should be banned from publicity-seeking in any hospital ward.

All public, unless close family or friends of a particular patient should be banned from wards Joe. That would help the infection problem quite a bit I suspect.

Politicians and others are public by the way.

Nothing a good flame-thrower won't sort out Subrosa!

Only kidding! All patients should be tested for these things before they are admitted to hospital like they do in many other countries. They don't know how many patients are bringing these things into the hospital also - there are lot of dirty people out there who don't even wash their hands after going to the loo so washing their hands going into a hospital will be too much trouble for them.

The problem with c.diff testing Billy is that it takes a few days. If someone's greatly in need of hospitalisation are you suggesting they aren't accepted?

Also c.diff is not usually contracted outside hospitals. It's the cleanliness within them, or lack of it, which makes them a breeding ground.

Not suggesting that at all Subrosa. If you are found to be positive then they can isolate you and deal with the problem. With non-emergency patients I presume you would be tested prior to your admittance. Other countries manage to do these things so why can't we.

Billy,I can only explain to you my situation when I contracted c.diff.

I was admitted for a one night stay for investigation the following day. After that procedure I went home.

Within a few days I thought I'd food poisoning and treated myself for that. No result and the pain and symptoms increased so I saw my doctor. He gave me pain killers and agreed I must have a gastric problem but asked for a stool sample which was taken to the surgery the following day. A week later the problem was so bad I was spending 20 hours a day in the toilet. One day I passed out and the doctor was called. He examined me and said he couldn't find any blood etc. He insisted there was nothing in the stool sample, but I later found that, although the sample had been taken to the surgery on a Friday am it had not reached the hospital path lab until later on the Monday. By then the spores were inactive owing to being in airtight conditions for so long.

After pleading with the doctor that I did feel very ill, he agreed to send me to hospital. Within half an hour of arriving I was wrapped in tin foil because my temperature was so low. I was put in a ward with 5 other women and we shared toilet/bathing facilities. That was a Thursday.

Later that day another stool sample was taken as it was thought I had ulcerative colitis (after an attempt at examination).

It wasn't until the Monday evening I was told I had a 'slight' infection and was moved to isolation. Four days I put 5 women at risk - two very ill.

I did my best to clean the toilet area each time I used it and fortunately I didn't pass on the infection.

Our hospitals aren't up to scratch Billy, in cleanliness and the way they are allowed to be used like public meeting areas.