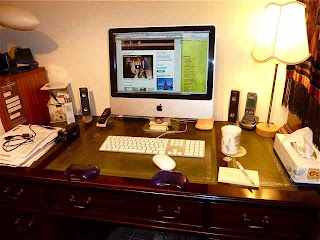 JuliaM has tagged me in one of those 'memes' which asks for a description of where I type away.

If it was any other day of the year I wouldn't dream of publishing a photo of my desk and would be writing a list of what sits here, but Hogmanay is the traditional time for Scots to purge their tiny portion of the planet with frantic activity until the whole house smells of beeswax (courtesy of Pledge), glass cleaner (courtesy of Mr Muscle) and bleach (courtesy of Domestos).

The study didn't escape either and my desk received its annual polish.

Unlike this blogger I didn't remove anything prior to taking the snap.  That would be cheating wouldn't it.

Most Scotsmen, and very possibly men from anywhere, don't see the need to have their space 'visitor proof', especially when the deadline is 11.59pm on 31 December, but it all goes back to the days when Scots stayed in their homes to welcome the New Year, then they took to the streets suitably equipped with a bottle of whisky, shortbread and a few pieces of coal.  Pieces of shortbread and a lump of coal was left at any home visited and represented good wishes for a new year in which food would never be short and warmth would always be present when required.

Gone are the days when first-footing was the norm.  It never happens now.  When I first arrived here there was a neighbour who used to visit any home with a light on after midnight.  He was always welcomed and would be provided with sustinance consisting of a sandwich to a three course meal.  (Yes he did get offered that at one home way back in the 70s).  Sadly he's been gone for a few years now and has taken the tradition of first-footing with him.

As children we were usually wakened just before 'the Bells' and staggered through to the living room where we were presented with a glass of lemonade with which to toast the New Year.  For some weeks we'd been coached in our party pieces for the family get together later in the day and this small gathering was a good chance for a final rehearsal.  My brother usually played some jazz on his clarinet - much to my mother's disgust because she thought the only 'pure' music was classical - and I would do a wee turn singing and when I was older it usually involved a bit of  dreadful piano playing too.  Lots of folk had a piano in the house in those days.

Enough reminiscing. Life wasn't all good in those days but there was a sense of community which is now missing except in very small hamlets where people only survive because of the kindness of their neighbours.  New Year celebrations now involved expensive firework displays and celebrities who perform to the masses in city centres.  I tried the Edinburgh Hogmanay festivities once - never again. Standing passively in freezing temperatures while being jostled like a bowling pin wasn't my cup of tea.

Politically this year should be an interesting time in Scotland. We have the Holyrood elections in May and it would seem the SNP are the underdogs. There is little interest in Westminster's AV referendum and I can't see it being the talk of the steamie.

I'd like to tag Munguin's Republic and Caron's Musings. A description of their work space will be interesting, not least because I know Caron is clever with social networking equipment.
Tweet
Posted by subrosa at 20:17

"As children we were usually wakened just before 'the Bells' ...."

Ah Joe, none of the hard stuff for us children. As I got older I was allowed a thimblefull of my granny's parsnip wine watered down with half a pint of water.

There'll be damage if he's right.

Evening Rosie and may I wish you a very happy, healthy and prosperous new year. Love the desk, but what happened to all the cables, bills, letters, pens, glasses (and glass rings - sorry you did say you'd been out with the pledge) bus tickets and various other tat that I appear to have on my equivalent?
Meantime, we've had a grand time at Hogmanay and New Years day in no tram city with my family and friends. Drams, stories of the past, music, stovies, broth, steak pie, cake, bun and shorty (and a late rise in the morning). BTW, no visits to any of the organised events.
Now BIG business can drive Christmas and people into debt but Hogmanay - well, in moderation, it’s something that we can all enjoy - for the bairns - cakes and ginger wine (yes I'm a sadist - I hated ginger wine, that cold dark brew mum made, that exploded in your gullet into a fiery heat (having forgotten what happened the previous year)) to the more serious stuff, augmented by considered applications of grub, drams, blethers, food, tea, more drams and a late lie down.
All the best for 2011; to you, your contributors, commentators and readers. I look forward to the jousts ahead!

Seeing as everyone is doing it, I'll stick my photo up!

Only one comment - you don't clean windows with Mr Muscle! You use soapy water with some vinegar in it and kitchen towel! God lass, do I have to teach you everything?

New Year celebrations seem to vary over the country. I was in North Yorkshire in a market town and it was amiable with people wandering about to various parties. There were fireworks somewhere - I saw them from the window - but when I checked with another village pub today, they said they had a very quiet trading this year compared to last year, when temperatures were roughly the same. In fact, last year it might have been colder as I had to deal with thick ice then but it had thawed to +2 today.

Jings Derek, that's scarey stuff in the video. Batten down the hatches right enough. We usually do get gales here late January/February and I hate the howling.

Dram, I don't need too many cables, just the keyboard one. Macs don't involve lots of cables. The others go down the back out of sight. Just as well because cables etc worry me. I've always liked a reasonably tidy desk but I keep a heap of papers which have yet to be perused on it. Regardless of my efforts that never seems to diminish.

So pleased to hear you've had a good Hogmanay. It's fine to share the time with friends and have a blether.

A guid New Year to you too.

Neat and tidy for New Year WfW but it's usually not too bad.

I find vinegar doesn't do my windows well and Mr Muscle is quicker. Always used to use vinegar on the 'old' windows but the new ones don't seem to like it. When I spoke to the glazier he said modern glass sometimes has a film of some kind over it. I think he was telling me a fib don't you?

Aye it does seem to vary WoaR. I remember when I first went to live in England in the early 60s nobody celebrated New Year in the village. They thought us Scots strange.:)

Thankfully we don't have many fireworks here, they're usually for 5 November.

I wonder if the threats of more freezing weather (= bad driving conditions) have kept people from travelling. They certainly have here if you don't have a 4 x 4.

Happy New Year to you.

A somewhat belated Happy New Year to you!

A belated Happy New Year to you too Rab.