Our Education Systems Are Failing Our Children 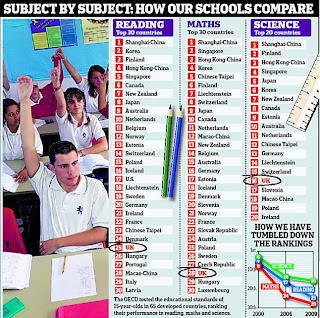 click to enlarge
Yesterday the Organisation for Economic Co-operation and Development (OECD) published figures which compare the standards of 15-year-olds in 65 developed countries. There are no separate figures for Scotland so I'm assuming they have been collated under the UK banner.  The study was based on two-hour tests of 500,000 15-year-old schoolchildren.

Education spending has risen from £35.8 billion to £71 billion yet the UK has slipped from 8th to 28th in maths, from 7th to 25th in reading and from 4th to 16th in science in the last decade.  Twenty per cent of 15-year-olds are 'functionally illiterate'.

The National Association of Head Teachers said: "This shows the price paid for a decade of targets, tests and tables that suck the joy out of learning and curb talents of front-line professionals."  That's the first time I've heard the NAHT complain.  They usually appear to go along with government decisions.

For years now many of us have commented on the dumbing down of education yet politicians seem afraid to do any radical changes and prefer to tinker around with the system with schemes such as the Curriculum for Excellence in Scotland.

Our priorities are wrong.  In Scotland, the vast majority of schools are eco-schools - a worrying concept.  We have lost the ability to teach our children the basic subjects which will prepare them for the adult world.  Of course, such poor standards in our schools results in poor standards in university/college education.  Our young are spending four years in universities doing degree courses which many academics say should be reduced to two years at the most.  Our higher education system also needs a radical overhaul, but as long as governments continue to throw money at it, nothing will be done.

For the sake of our children we have to insist changes are made.

Scotland was shown to be flatlining and the fall cane from England I believe. However now that this outfit are back in Scotland and have entered our education system there is no saying what will happen to education . Allowing schools to become , what will effectively be assessment pens with each child being able to text answers to leading questions straight to the questioner.
First lesson Witchcraft eh?
http://www.home-education.biz/forum/general-discussion/12918-promethean.html

As you say SR, it's surprising to hear the NAHT complain, they and the other teachers Unions are the main obstacle to useful reform, they would rather serve their vested interests and socio-political agendas than provide a proper education.

I knew from the 2,000 Chinese undergraduates at my local university that they were doing well but your graph illustrates just how well.

As for teacher training, having a degree will not equip a new teacher with the necessary skills to be effective in a classroom while the lack of a degree should not be a drawback for a 'natural' teaching up to whatever 'O' levels are called these days. Just like a politician does not need a degree in Politics (what ARE they for btw) and neither does David Beckham have a degree in football.

The tests, targets, and league tables, were intended to force the "profession" to concentrate on the basics.

They were then (predictably) hijacked by the educational establishment - and turned into a bureaucratic nightmare. It was a classic "Nyah, that'll never work...oh look it hasn't worked" situation.

What we need to do is take the educational establishment (by which I don't mean the teachers) outside and shoot them all, demolish all the teacher training colleges and sow the ground with salt, get rid of all LEA's, and start again with a clean slate, the teachers in charge, the parents with choice options and holding the funding, and an absolute determination that no child shall leave primary school unable to read, write, and add up - as routinely happened in the 1950's, and come to that the 1850's.

Of course, none of this will happen.

And we are surprised at these results, because?

That said - Modern day education gives proof, if ever proof were needed, that standards in education are in decline.

In times, long gone, we were brought up with the joy of reading, anything. With that came a broad general knowledge.
Now the latest generation rely on an on-line précis of any literature, and ‘Google’ has become the font of all knowledge.

Oh’ – bring back the good old days - for the sake of our kids.

I don't know if the system in Scotland differs from that in England, however, this father of four sees the system here as tantamount to child abuse. It is a disaster. My ex and I sent all our four to Steiner schools, as we felt this many years back. Shocking. Steiner's pithy summary of the purpose of education - to produce free and responsible adults. That is CLEARLY not happening.

This is well worth watching - the guy is on the right track.
Changing education paradigms

The full lecture on which this is based is on the RSA site.

Morning Elaine. Thanks for that info. It just seems to get worse. Why are we spending all this money on education when money won't improve it?

You're quite right banned. I used to know a man who had a teaching degree then did his probationary year at 3 schools. What I didn't know was that 2 of the schools asked for him to be moved but didn't give the honest reason - that the lad wasn't cut out to be a teacher. It took the head of the third school to be honest with him. Now he's a social worker.

I would support that WY. Indeed, no child left my school not being able to read or write. One of my friend's mothers couldn't read or write (she'd be diagnosed with dyslexia nowadays) but she was a whizz at maths.

Unfortunately none of this will happen. They're too interested in filling children's heads with eco-nonsense and sex education.

But they were better John. We had respect, trust and discipline then. They've all gone.

It used to differ Elby but these days I think the difference is minimal. Clowns now rule and curriculums are full of nonsense.

Thank you for the link. Off to watch it.

I agree, and this part of education is far more important than listening to the witterings of university students complaining about the amount of money they might have to repay.

Japan, China, & Hong Kong all come above us in reading ability. If they can achieve this with their complex characters, something is surely very wrong in this country.

My grandmother, born in 1862 in a working class family went to a "National School" which she left when she was 12. In spite of this, the letters that I still have from her reveal beautiful handwriting and a standard of literacy sadly lacking in most people these days.

Our children have all been very badly let down by the educational establishment, a subject that I have been writing about in my own blog at http://english-pensioner.blogspot.com/

It is Iain. I have a problem with the fact so many of our feel a university education is a right and not a privilege. Then I'm of a generation in which only perhaps around 5-10% went to university. That's in the days when every university prioritised quality not quantity.

I can imagine EP. My own grandmother was similar and her handwriting very charateristic. Never did I ever see a spelling mistake either.

Well at least some parents seem to be making themselves heard :)

"The first evidence of a parent revolt over Curriculum for Excellence has emerged.

An Aberdeenshire parent council has launched a local and national campaign to highlight concerns over plans to restrict the current S1 cohort of pupils to a maximum of five subjects when they reach S4 in 2013 and become the first pupils to sit the new qualifications.

Banchory Academy parent council is calling for urgent action to extend S4 subject choice to the current eight or nine before the qualifications system is finalised.

And the head of the Scottish Parent Teacher Council is predicting that Banchory Academy is likely to be the first of many parent bodies to protest."

Thanks for that Sheila. Sadly it's only children who are in private schools who will benefit these days.

I noticed the 'jargon speak' from the SG spokesman. How I wish they'd stop it.

Sack all the bureaucrats.

Put headmasters and teachers in charge.

We also need to reform the culture of this country, so that families are not so corrupted.

Close down the BBC and all Murdoch media for a start.

Interesting breakout from the OECD survey with Scotland as follows

Overall, the analysis of assessments of a cross section of 15-year-olds from the Organisation for Economic Co-operation and Development (OECD) countries shows Scotland is ninth in reading, 12th in science and 14th in mathematics.

A bit of a difference then between the UK, as a whole and Scotland. So, not so bad but not advancing.

Initially I couldn't find the separate data on Scotland but I have it now and you've just given it so saves me doing an update. :)

Hi,
A sweet little gesture can make it all. if you want to bring a revolutionary curriculum, then it is necessary to understand today's students concerns and interest. education must be an interesting and advanced field.
Essay Papers

Morning Ana. The whole secondary education system is set up to fail 50% of our children because it's comprehensive. Trying to teach every child the same subjects hasn't worked. Children who are less interested in academia are left kicking their heels until they're 16 and even then schools encourage them to stay on for the £30 a week, just to keep numbers up. They offer them little or nothing and by that age most of their enthusiasm for, say a vocational subject, has been drummed out of them.