Are Scotland's Assets Being Stripped Once Again? 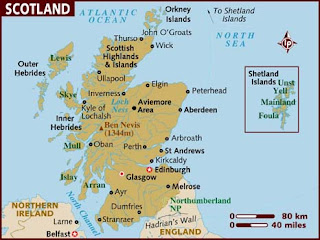 In the past few weeks there has been discussed about which RAF base in Scotland, namely Lossiemouth or Kinloss, will be chosen for closure as part of the Westminster government's recent defence review.  Now Leuchars has been introduced to the debate the day we learn than 200 RAF Leuchars staff are to be deployed to Afghanistan next year.

It's been impossible for me to give knowledgeable comment on the Lossiemouth and Kinloss debate but I do have some knowledge of Leuchars - not least because the very name means RAF in this this part of Scotland.  It has been there for 100 years and constantly added to the Fife community and the safety of the islands which compose the nation of Scotland.  Less than ten years ago it lost its highly commended search and rescue service, leaving the burden to RAF Lossiemouth.  That was a drastic decision which affected lowland Scotland, yet little protest was made.

The Scottish government are lobbying for RAF Leuchars to survive.  The people have to lobby for both Lossiemouth and Leuchars to survive. If these bases are allowed to be closed they will never be reopened.  Remember the promises given about industry reinventing itself after Margaret Thatchers cuts?  Industry couldn't.  Their bases were no longer there.

Today we have Westminster deciding Scotland only requires one 24 hour coastguard station.  My long-dead father will be birling in his grave.  In the past 40 years the coastguard service has been gradually reduced causing our seafarers concern.  Scotland's waters are not only associated with oil, but we have a struggling fishing industry which relies upon the expertise of their nearest coastguard in case of emergency.  It's not only seafarers who reply upon the service, it is communities who exist in coastal areas.  In the past I've mentioned Scotland's coastline these days is wide open to all and this decision that make that far more evident.  We're never informed of the smuggling which goes on around Scottish coastlines, nor are we informed about other illegalities.

Perhaps I'm being paranoid.  I'm quite prepared for that accusation.  But I do think Scotland is being further isolated from England.

It's up to the Scots to stand up and protest.  Don't forget, independence will never be offered, it will be taken.  In this new Westminster coalition they have nothing to lose destroying Scotland in this way.
Tweet
Posted by subrosa at 20:20

You teasing us again SR with this post title? *ahem*

" It has been there for 100 years and constantly added to the Fife community and the safety of the islands which compose the nation of Scotland."

So has Alex got an air force tucked up his sleeve for when Scotland gains independence? (just a joking 'tongue in cheek' 'dig', you understand?)

Just a tongue in cheek answer you understand;

Ten percent of all RAF assets...

...including the only RAF bases left.

They will be in England of course.

Given that "Scotland's" assets are paid for by English taxes (does Barnett ring any bells?) it's about time the balance was redressed.

If you think you can survive as an independent "nation" with a population about that of a large English county or two, feel free to have a go. You'll be in Brussels with your begging bowl out in a few months.

Isn't ignorance bliss for some maybe they could enlighten us teuchters as to the benefits of this disunion as none have been shown anywhere on this planet to date.

Its called rape and pillage in the history books SB.

Not at all WfW. I doubt if many Scots would strip in the temperatures we're experiencing right now. :)

I'm sure he has WfW. Eck will have an air force organised. How else will we be able to get these foreigners, who are stupid enough to think they can beat the weather, off the hills. :)

Of course they are Conan.

So I don't pay taxes John R? How wrong you are and there are plenty like me who have no say as to how their taxes are spent, because Scotland is of little interest to Westminster. It was when Labour were in power because it is their power base, but no longer.

I've never seen any benefits either CH and believe me I've tried, because I have really wanted to think there were a few at least.

It is CH. Asset stripping is just kinder language.

"Given that Scotland assets are paid for by English taxes (Does barnett ring any bells?)" Ehh what planet are you on? Have you heard of Liguid Gold? Tell me or more to the point educate me on how English Taxes pay for Scottish Assets?

For the benefit of any non-Scottish readers …

RAF Leuchars does contribute some financial benefit from service personnel living in a rural area, and their input into the local economy.

RAF Leuchars has the sole function of providing the Quick Reaction Alert (North), 24 hours a day, 365 days a year. This is part of the defensive outer ring for sensitive establishments in the North of England and other strategically significant English sites.

RAF Leuchars has had its runway reinforced and relayed in the last three years. This is not for the benefit of anyone in Scotland, but rather to accommodate the larger and heavier Eurofighter and American aircraft on route to locations further east.

If the base at Leuchars does survive, it can only benefit Scotland by the spending power of those stationed there. It offers Scotland no military or security benefits.
Perhaps there is a case for the base to close and be turned into a Science/Technology/Industrial park offering employment to the indigenous local population.

More frightening than the future of RAF Leuchars is the fate of the three Coastguard centers about to be axed. Their closure will put lives at risk.

Thank you John. I should have put a link to Leuchars' contribution towards the UK.

I agree it nowadays it does not have a military role.

However I'd started this post only to hear about the coastguard centres being closed. I would agree they save lives in many ways and not just by rushing out to sea in bad weather.

How many have been lost in the past 30 years, when they were first reduced, will never be recorded. To think that Scotland, with more than a third of the UK's coastline, can manage with just one service is a lie. I do hope the Scottish government shout loud enough and often enough to prove it.

Hi SR, so once again disproportional cuts north of the border. Look at the map and compare the land area of Scotland and England. Why leave at least one third of the country with almost no maritime rescue ability and virtually no military?
If England does not want us, because they think we cost too much , then give us independence and we will see if we can go it alone.
I personally think they know that England would be worse off if we were independent, and I dont mean independent inside the EU, we definitely could not afford that.
But then, England may sooner rather than later,find that they cant afford the EU either.
But when a company is in financial trouble,its the smaller outlying units that get asset stripped first, then closed down/sold off.
Unfortunately Scotland has a high capital value, which gives head office problems.
And of course its a convenient place to hide missile submarines.
One does wonder though at what point the submarine base will be left exposed by by the ongoing reduction of the military presence in Scotland.

The thought occurs that rather than going on about Scottish Independence, we should be promoting English Independence to the English, they seem a little miffed that they do not have their own parliament.
If we were independent,they would have Westminster all to their little selves, now isnt that a good idea?

Hi Apogee. I'm sure you know my stance on independence by now. We're never going to be 'given' it. It's up to us to take it.

So little in the papers about this too. It's as if the Scottish media have been told to keep it low key. Surely they wouldn't though.

It's very worrying indeed, both the closure of the bases and reduction of coastguard services, which it would appear, are to be operated by computer now. No personal involvement at all.

Oh I meant to say there are plenty trying hard to promote English independence but with little success. Unfortunately they get labelled 'far right' and that would seem the tag to ignore them.

The last time I looked at a map Scotland seemed to have rather a long coastline. Also, according to all my maritime family members the waters are often quite challenging and unpredictable. The fisheries have declined but there is still a lot of action in both the Northern waters and the Southern approaches. The "unknown" is the number of people venturing out with little experience or seagoing knowledge. Also, can we really afford to lose that amount of relevant experience in what is a small group of people at present? I have seen too many severe reductions made down the years that have gone very bad. This looks to be another one.

I would guess that Fife will survive without Leuchars. Moray without any RAF base might be a different matter.

Strategically of course they are all irrelevant as the main threats to the UK are apparently cyberattacks (HMG opinion not mine).

Taking the long view as an SNP person, good riddance to the UKs war machines.

Clearly an independent Scotland will need search and rescue aircraft and some fishery/oil protection craft. Not billion pound white elephants that Air Vice Marshalls need to justify their existance.

Demetrius, having had a family member who was involved in the policing of our coastline many years ago, the work of the coastguard isn't just to do with rescuing those in difficulties. There's much more to it than that, with the policing part perhaps as important. We're seldom told what goes on in that section of the work.

It does look to be another one.

I will have to disagree with you Strathturret.

How do you expect an independent Scotland to protect itself?

'Eck will have an air force organised'
Yes and they will be called the 'EU Luftwaffe'
As regards the coastguards why aren't the English Scottish Welsh and Irish up in arms together.
Nationalism isn't the answer , revolution is lol

From anyone who wishes to do the country harm Strathturret.

25 years ago Art the coastguards tried protests. Their numbers were cut even more drastically. Since then they seem to reply upon the general public to shout.