'We Cannae Dae That' Say Councils 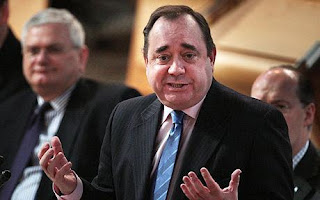 But is it a case of 'We winnae dae that'?

The newspaper which delights in publishing Labour press releases, reports the council funding deal, mentioned in John Swinney's draft budget on Wednesday, between the Scottish Government and local councils is 'fracturing'.  No bets on which council is leading the negativity.  Aye, it's Scotland biggest spender Glasgow City Council.  They said they now faced an impossible choice between agreeing to a deal they believe to be unrealistic or, by knocking it back, having to raise council tax by as much as 20% next year.  Then, not content at threatening their council tax payers, they also have to threaten their employees by stating a third option would be to sack 2,000 frontline staff, including social workers, teachers and binmen.

Why do local authorities always mention these three skill areas?  What about over-staff personnel departments - yes I know I'm old fashioned and ought to call them HR - planning offices, chief executive departments?  Oh, silly me, they're not in the public eye so therefore not frontline.

Aberdeen and Aberdeenshire have also announced they will axe 2,400 jobs over the next two years and are preparing to close schools, libraries, sack community wardens and reduce day care for the elderly.

Between these three councils they've managed to cover the areas which will create the most upset within communities. Scaring the people is bullying.

What this article 'forgot' to mention is that John Swinney and other Cabinet Secretaries liaise directly with COSLA, (the Convention of Scottish Local Authorities), and its president Cllr Pat Watters plus other political representatives.  On Wednesday Cllr Watters was quoted as saying the budget was 'the best deal we could negotiate for Scottish local government'.  Cllr Watters signed an agreement and it's up to him to ensure all councils abide by it.  The 'fracturing' is between COSLA and the local authorities, not the Scottish government, therefore it's up to Cllr Watters to apply the stookie.

The Herald welcomes the commission on the future of public services today by stating 'A wholesale review is long overdue'. An excellent move by the First Minister.

A good news story I haven't read in the Scottish press - although it may have been tucked away in the sports section - is the First Minister's refusal to fund the upkeep of the Scottish Variable Rate which allows MSPs to increase or lower income tax by 3p in the pound.  The power has lapsed and will not be available for at least another two years.  It sounded a good idea, when we voted for devolution, but I doubt if many people thought it would ever be used.  The government confirmed the previous £12 million agreement with HMRC to invoke the tax powers expired in July 2007 and claimed it would have cost £7 million more to be extended.  The Unionists are up in arms about this so it must be a sensible decision.

“This administration does not advocate increasing income tax for people in Scotland, and spending yet more millions on a limited tax power which none of the major parties wanted to use,” a spokesman said.
“What Scotland needs is not an unusable and expensive limited power. We need full financial responsibility.”


Nothing less will do.

Why, I am wondering, would we need to renew tax raising powers? As far as I can see it was part of the devolution settlement of 1997, and why it would run out, when that wasn't a part of the referendum question is beyond me.

In any case why would it cost £7 million to do it. Was this just a way of taking more money to London?

Your questions are similar to mine tris. All I can think is that a horde of tax officers sit in HMRC waiting for Scotland to alter taxation by 3p. Daft to pay for that isn't it.

Maybe its time Swinney called Glasgows bluff and said to them since you think the agreement with COSLA is unworkable we will withdraw the offer from Glasgow and re allocate the funds saved round the other councils who will make it work.

The SNP are falsely accused of being against Glasgow, it is the other way round Glasgow Council are against the SNP, so they will get stick from Glasgow and the main stream media anyway, so they would be as well putting the money to better us.

What happened to the local income tax that the SNP were going to introduce in place of the council tax?

Dubbie, you've no idea how often I've wished the SNP would call Glasgow's bluff, especially when I hear the corruption stories. Such a shame John Swinney couldn't take action. Mind you he could say go ahead and then they receive the lower funding of 2.8% I think it is.

The UK government refused to permit the Scottish government to use the Inland Revenue's services if I remember correctly William.

Under the present stratagem of cuts and the dire need to balance the books, at the ordinary peoples expense of course, any extra money raised in Scotland would be deducted from the housekeeping Westminster "charitably" hands back.

Three parties are playing politics in Scotland against the only one trying to make politics work.

The Daily Telegraph reported today that 38% of local councils had increased the number of permanent staff on their payrolls in the last two years. I doubt if any were "front-line" staff.
No doubt the same is happening in Scotland!

The Scottish media is a disgrace.

The group that owns the Daily Record will hopefully go bust.

The Scottish Labour Party would appear to represent only certain oligarchs and 'mafias'.

I believe the cut is -2.8% if councils accept the council tax freeze, teacher numbers and class sizes. the cut is 6.4% if they do not accepted the conditions.

Swinney has learned from last year when Glasgow took the class size money then sacked teachers. Where did the money go? Someone has drawn a line under that one.

Exactly RA, so why have a tax raising/lowering policy when it's of no benefit whatsoever.

I'll have a dig around to see if I can find anything about Scotland EP but, if I remember, only the NHS has increased staffing levels here I believe.

Can't disagree with a word Aangirfan.

That's it Dubbie. Lines are drawn under things every day in Glasgow I'm sure. The SNP group try hard to break the mafia styled grip labour have but with little success as yet.