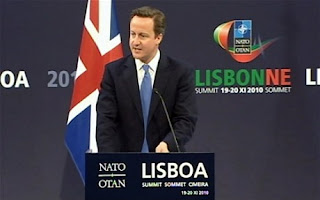 As thousands of protestors marched through London against the war in Afghanistan  the great, the good and the incompetent strutted their stuff in Lisbon.

I wondered why Dmitry Medvedev, representing Moscow, chose to become involved.  Most probably it's because Russia is concerned about the Afghan opium trade and without the assistance of NATO Russian efforts to curb the corruption would not succeed.  Moscow is looking long-term  at the problem because it knows how damaging the poppy fields are to its economy and it needs the assistance of the west.  In return Moscow was invited to participate in a US-led missile defence programme intended to intercept long-range attacks launched from Iran.  This agreement also has implications for the Afghan conflict, because Russia will allow greater use of its territory for transporting NATO supplies to Afghanistan as well as help fund more transport helicopters.

Our Prime Minister, like many of our modern politicians, is looking no further than the next election. By announcing that the transition deal would 'pave the way for British combat troops to be out of Afghanistan by 2015', he considers he is sticking to a pledge to take British forces off the frontline before the election. Is his insistence upon setting a date sensible?  Do you tell the local burglars when you're going on holiday?  Much as I would like to see our armed forces out of this war, this is a move which could put the lives of our soldiers at risk because all this does is tell the Taliban exactly how long they have to hang on and gives them a psychological boost.

By contrast US officials insist that the NATO transition plan did not guarantee an end to American combat operations.  US forces could go on fighting the Taliban even after transition.  Barack Obama said he is pretty confident that US troops will still be maintaining a counter-terrorism capability after 2015.

David Cameron's firm stance has jarred with NATO's conditional plan as NATO's secretary-general insisted: "This process must be conditions-based and not calendar driven."

So who came out of this summit smiling?  Russia it would seem and of course Karzai, as he must be delighted to hear Britain will continue to pour billions of aid into his country long after our soldiers have left.

I think the Russian involvement is indicative that, despite some cold war rhetoric especially from across the Atlantic, there is a large area of common interest - the risk of islamist risings and the need for a stable Afghanistan. We can but hope that this might grow into further co-operation a little further west too.

Amazing, the Taleban reduced opium production by over 90%, but since the occupation the opium crop is larger than ever before, the russians come on board because the problem is flooding across their borders...is everybody stupid!!!! or just the world governments?

Afternoon Richard. I think Russia coming into the picture shows the weakness of the US too. The US aren't particularly keen on NATO and would prefer another form of alliance I understand. Can't find the links though. :(

Now Nomine, that's a difficult question. I'd answer it in part by saying world governments...

I was hoping for a repeat of 1st November 1755 but was out of luck.

I agree. It seems a strange way to run a war, giving advance notice of when you are going to throw in the towel because you need an election boost.

But it was like that with Iraq too. We told them when we were going to bomb Baghdad, which of course meant that anyone who mattered wasn’t there, and instead we murdered thousands of kids and innocent civilians, maimed thousands more, and wrecked their lives, their homes, everything they had, because they couldn’t just move out. I’m not surprised that Bush wouldn’t have understood that, but i would have thought Blair had a little more intelligence.

It was, and this is, some sort of trophy war, of course, both of which have left us with egg all over our faces, which doesn’t matter a jot to me. But it has also left hundreds of thousand, some say millions dead, injured, maimed, homeless, refugees, including our own soldiers, who appear to have been fighting to make money for Mr Cheney and glory for Bush and Blair, Brown and now Camerclegg. And that makes me spitting feathers angry.

Of course, as a further result of our interference in things that have little or nothing to do with us, we have recruited for the Taliban and Al Qaida more faithful servants, who hate the West for killing their fathers and mother, sons and daughters, than they would have imagined possible. This has made the streets of the UK less safe than they were before the idiot leaders set out to make the world a safer place!

It is, and has been from the beginning, an exercise in showing the world that we are still capable of poking our stupid noses in other people’s worlds and making a complete mess, then pulling out and claiming some sort of victory.

We should be so lucky Demetrius.I don't even think they discussed global warming far less naturally occurring incidents.

Well said Tris. I haven't read Stupid White Man but I suspect I could agree with the majority of it.

Aye what a mess and our streets are far less safe than they were 20 years ago.

But you forgot one important element, Blair got to play George Bushs poodle, and he got a nice congressional medal.

I hope he remembers to wipe the blood off every time he looks at it.

Dubs, I think his wife had it up for sale on ebay...

But you're right of course; he did get that medal from his master, a bit like a sea lion gets a fish. He probably thinks it will make him a place in history.

Well, it will, but I don't care for the company he will be keeping.

A touch off topic - but not entirely unrelated.

Much has been made of Osborne's largesse (not) to our Irish neighbour; with special emphasis placed on the fact it's Westminster
UK Corp., third largest export market?

What does that tell you of the entrepreneurial and commercial skills of the UK when wee Ireland is third in its export league?

Would an independent Scotland oust it from the dubious distinction? Or, since much of the exports involved will be energy commodities, will that leave Ireland as a valued customer of Scotland?

One thing for certain it does show, is that Westminster is not the blue chip it claims to be in the world league; probably more of a bit-chip.

Actually RA, when I was watching the news at teatime I thought exactly that. What are we exporting to Ireland? Foodstuffs? We don't manufacture anything anymore that's why we have no export industry to speak of.

Until we do we'll never have a stable economy. There's nothing blue-chip about us. Politicians are just resting on history rather than current fact.

The latter I think, don't you RA?

Rosie, lots of people think and there is evidence to say that the CIA are controlling the heroin trade and probably punting it into Russia. Vodka will be getting too expensive and the oligarchs will want their cut of the drugs trade. There's football teams to buy, you know!

Still off-topic, I don't think Ireland is our third biggest export market. In the 2009 figures, it is fifth. Our biggest exports are medicines, petroleum products, cars, aircraft and telecommunications equipment.

William I've just published a post putting up an export graph. You've seen the same one.

Got your graph Rosa.

Kind of underlines our case when you relate and equate UK export earnings and the population size of the worlds major trading nations.

Seems to exploit the Tit for Tat theorem of Games Theory - what you Tit, you'll get back in Tat - or balanced trade between equals - both in the long term.

Whatever way you look at it, it certainly takes the "Great" out of Britain.

It certainly does take the Great out RA. We're pandering to India yet they're chopping us down. Nobody in government mentions it though. Same with many other countries as you'll have seen.

It surprised me we're in surplus to China even if it is a small percentage.