It Will End in Disaster 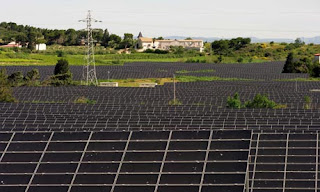 Only recently we were informed that 'solar fields' was the latest renewable energy scam - for energy consumers it's the latest rip-off.  Companies selling solar panels are flooding planning offices all over the south of England with requests for solar fields as the number of landowners leasing out their land rises.

Cornwall's farmers are jumping for joy as they celebrate the granting of planning permission for the UK's first purpose-built solar farm and a £14m loan for an even larger solar farm next to Newquay airport.  Unusually the five-acre facility at Wheal Jane faced no major objections for the erection of 6,000, two metre-high photovoltaic panels.  Of course it's the subsidies which are attracting farmers and who can blame them when handsome cheques will regularly pop through their letterboxes and their greatest effort will be nipping down to the bank to deposit them.  Farmers are being offered up to £1,500 an acre to cover their green fields with PV panels. James Delingpole has an excellent article in which he states 'any taxpayer-funded scheme to carpet that unspoilt landscape in solar panels to generate electricity at nearly three times the market cost is bound to end in disaster.'

But those who think the planet must be saved before 2020 will be pleased with the solar panel development.  It's 'green' you see.

But will the natural balance of our countryside be affected by these acres of black mirrors? 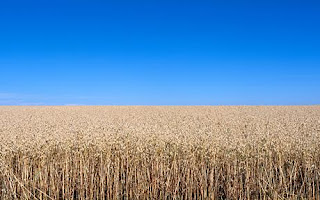 Different strains of crops such as wheat have significantly different levels of reflectivity, or albedo, say scientists.  Selecting those that reflect the most could make summers in Europe more than 1% cooler they claim.  Under a moderate global warming scenario, a 20% increase in crop albedo could offset up to half of the predicted summer warming over Europe.

Now you may be wondering why I've combined solar farms and crops in this post. Well farms and crops kind of go together a bit like love and marriage used to do not so long ago.  But that's not my reason.

I'd like to know what the 'greenies' are going to do when the fields of the south of England are covered with solar panels and these studies on crops actually prove to be reasonably correct, because I think there is a good chance of that. It doesn't take a scientist to tell us that covering the land with solar panels will affect the natural balance of our habitat.  Not only that but we'll have to import more basic foodstuffs at possibly a higher price.  Yet the green lobby have been deafeningly silent about solar farms.

The farmers won't return to their traditional lifestyles of crop growing therefore the cost of solar fields will spread far wider than just another increase in domestic electricity bills.  But then we knew that didn't we?  And it will end in disaster.
Tweet
Posted by subrosa at 09:32

This sort of stuff hurts my wee brain.

Why, oh why oh why, do the green brigade assume they can change this? We have a perfect, self-healing system.

Leave it alone long enough and it will fix itself.

This is just tinkering for the sake of it. It is make-work for the greedy and for the insane. And the insanely greedy.

Must admit, if push came to shove, I'd rather see fields of wheat than solar panels.

Sheesh - Chis Huhne is a dolt. And a "green" cultist imbecile of epic proportions to boot - as you can see from a quick browse of his idiot outpourings on YouTube.

The application of subsidy to these schemes is about as foolish as it gets and I use the word foolish it's most pejorative sense.

What is wrong with using tried and tested economically viable (without subsidy) techniques like GSHP and CHP to reduce our energy burn ?

The UK has probably the lowest market penetration for the technologies mentioned above in Europe.

Yet again... public servants fail to do what it says on the tin.

You know my views on this SR so i'll say the same as I did to DL.

Same law of unintended consequences that saw the third world starve as vast tracts of cultivated land went to fuel crops and much of England covered in rape-seed to prove "ethical" bio fuel.

"More than 100 planning applications have been submitted ". Not surprising really, these will mostly be from scam merchants and con artists who see the money pile labelled "subsidised solar panels"; the same crowd who made a mint when "training" was recently fashionable.
Labour gave £105m to the Security Industry Authority to provide 'training' for door-staff but no-one within the Bouncing Community has seen any of it.

Why Wiltshire which is green and lovely, why not post industrial wastelands or even have them on barges out at sea?

Replacing acres of grain with solar panels is certainly going to fox the crop circle builders.
Would the Government not be better buying us all a 'Snuggie' blanket for the winter and sun-block for the remaining week of the year.

Welcome to the solar desert.

As an aside, what's the difference between welfare benefits - farmers who live off subsidies - estate owners who receive subsidies to maintain shooting/fishing/ woodland estates - and global conglomerates bribed by grants and subsidies to provide mundane jobs?

Answer:
In reality none.

They are all costs incurred, to a great extent, through ineffective, incompetent or corrupted governments.

Damn, I forgot the bankers - no I didn't; they're covered in the estate owners.

What about my clotted cream and cream teas when I go stravaging in Devon and Cornwall? What are the coo's going to eat to produce all that good cream, cheese, beef et? Oh silly me, the grain of course. But where will that be grown if the ground is all covered in solar panels? A very good question would be, in future, will coo's crap in solar fields?

you've a point with the crow crap - several of my supposed 24/7/365 solar powered endeavors have come unglued due to seagull and cormorant guano.

Ho-hum another string on the window cleaner's bow? Hi-tech green jobs - you know you want them.

I have to take exception to your scathing and disparaging remarks regarding those in receipt of welfare benefits, and in comparing them to “global conglomerates bribed by grants and subsidies” etc.

For almost forty years I was in continuous paid employment, paying taxes and contributions throughout these years.
In 2007 I was struck by illness and have been in receipt of the Disability Living Allowance welfare benefit since then.
I can assure you this illness was not of my choice, and I would not wish it on anyone.

If you think that welfare benefits, like the DLA, are merely “costs incurred, to a great extent, through ineffective, incompetent or corrupted governments”, then I sincerely hope you never find yourself in position of need.

To whom should I apply for a Research Grant, to 'prove' that broad-leafed Marihuana absorbs superior quantities of CO2 & therefore is environmentally friendly?

Who was it who said the end of civilisation is only three meals away ?
Oh yes, GBS.
Keep it up, your green fantasies are well on the way to achieving it.

Exactly banned. The ecology was completely destroyed by scammers. Rather like the GM debate years ago when it was suddenly found, by the sceptics, that seed wasn't produced from certain GM crops.

It's short term gain for farmers banned and these companies will play on that.

For some reasons I agree with you Clarinda.

I'm hoping to visit Cornwall in the next few years RA. It will be interesting to see the affect on the landscape.

The bankers are involved with most of those you mention RA.

The answer is maybe Dram but will that well fertilised soil improve the output of a solar panel is the next question.

I'm slow today Mcgraw. Remind me who GBS is please.

In principle I regard them as the measure of a civilized society - a measure of worth to those who get the short straw of the luck raffle.

Read my comment again on the understanding of its true meaning which I'd clarify as follows.

I hate the media campaigns funded by a government aimed at so called benefit cheats who, with few exceptions are struggling to exists. The do nothing but engender division and second class citizenship, while the same governments hypocritically line the nests of the rich minority.

It is governments who fail to maintain the jobs markets then are duplicitous in manipulating who is unemployed or on incapacity benefit. Now they have removed, in the same underhand manner unemployment benefit by calling it Job Seekers Allowance? This is simply another nail in the process of burying the Welfare State. A process that causes me great concern and which I regard as the strategies of incompetent and failed governance.

John; in one of my recent posts I quoted from the report by Phillip Green - Westminster's governance costs this Union £191billion per year of which he reckons is £63 billion is frittered away on inefficiencies. A figure I would suggest that is far greater than the cost of any alleged benefit fraud and one that any competent government would take steps to eradicate before penalising the poor.

I hope this clarifies my position.

"Nothing has been learned from European disastrous experiences, it seems. As Bjorn Lomborg (a firm believer in AGW) reports, Germany led the world in putting up solar panels, funded by €47 billion in subsidies. The lasting legacy is a massive debt and lots of inefficient solar technology sitting on rooftops throughout a fairly cloudy country, delivering a trivial 0.1% of its total energy supply. Denmark’s wind industry is almost completely dependent on taxpayer subsidies, and Danes pay the highest electricity rates of any industrialized nation. Spain has finally discontinued its solar subsidies as too costly; as Prof. Gabriel Calzada reports, the program actually caused a net loss of jobs.

Green bubble is about to burst

Thank you for your clarification.

I had (mis)read your comments as equating welfare benefits, and by definition those in receipt, to the least popular aspects of farming, estate owning and the running of global conglomerates.

Sorry if my post seemed a little ‘raw’, but of recent times I have become incensed by the words of politicians and the media who are endlessly targeting those in receipt of welfare benefits as the pariahs of society.
If there are wrongs these should be addressed, but equally if there is genuine need then as a civilised society we must address that also.

View from the Solent said...

Land-based plant life grows by photosynthesis - sunlight is absorbed and converted into the various chemicals that make up the plant. The more efficient this process is, the more the plant grows and the better the crop yield.

"increased albedo" means that more sunlight is reflected. It follows that less is absorbed. Growth is stunted. The crop yield is reduced.

John, no need for any apologies. It's understandable discussions branch into other areas.

But isn't it all about balance View from the Solent? If wheat is a crop which is classed as reflective then surely, by your calculation, agriculturalists should be trying to reduce the albedo and thus increase the yield. But would that affect the quality?

I hope I'm making some sense.

Banned, thanks. Yes it now widely known that Germany has found the introduction of solar panels to be quite useless and an expensive error. Denmark's association with wind the same.

Excellent link. Many thanks.