A Change for the Good 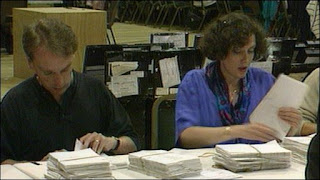 Since the 2007 Scottish Parliament election I've protested about the use of electronic counting machines being used in future elections.  The 2007 fiasco, which used these machines, saw almost 150,000 ballot paper spoiled - the largest number of rejected ballots in UK electoral history.

An opportunity was missed though because the postal voting system also requires some scrutiny.  Postal votes should only be available for those who are completely unable to make it to their local polling station or those who are not in the country on polling day.  With the introduction of companies like this one, postal voting has become a major part of our election process and it's now in the interests of political parties to have big numbers using the system.

Other changes to be introduced for the Scottish elections next May include:

* The reintroduction of separate ballot papers for the constituency and regional votes.

* A longer period - extended by an additional seven working days - between the close of nominations and the election which, it is hoped, will improve the way posta votes are handled.

* Registered party names to appear first on the regional ballot paper followed by the party description, with the option to use the preface 'Scottish'.

The result of an inquiry into the failings of the 2007 Scottish elections concluded that the Scotland Office's decision to combine the names of constituency and regional candidates on a single ballot paper was the main reason for the spoiled papers.  As the Westminster government seems to be intent upon having its voting reform referendum on the same day as the Scottish elections, I wonder if it will be the excuse for any mess next May.
Tweet
Posted by subrosa at 20:40

Hi Rosa, off topic but interesting.

Part of the problem in 2007 was that people got the voting systems muddled. Some people were aware of the changed system, but I saw some evidence that people had tried to apply STV across the single sheet Scottish Parliament ballots, resulting in spoiled papers.

My husband was at the count with me and suddenly clocked why people were putting figures in the Scottish Parliament ballots - the problem was that the list and constituency ballots weren't being shown on the computer screens together and you therefore couldn't establish what their voting intention was.

We really need to understand what people had done and why - there's a logic in some cases, and it could cause confusion still, e-counted or not.

Oh and another thing I'd like to see is that at the close of count the Electoral registers are witnessed and sealed by a sheriff and then locked away in a central repository. Access only by Scottish Courts staff answering enquiries. The incident of the "missing" fife registers was a disgrace. We have been too blase regarding these important docs, especially when there was the whiff of a scandel regarding the postal votes in this case.

I saw that yesterday Conan. What a childish remark to make and quite uncalled for. Amazing what a difference a few pronouns make isn't it.

Belle, according to the inquiry into it the problem was caused by putting the names of the constituency and regional candidates on a single paper. The whole thing was a mess. Even geared up for it I found I had to be careful what I was doing.

I think you can but dream about that Dram. Just can't see it happening although it is an excellent idea.

A good area to keep the pressure on.

Aye Matt, just because we've achieved a little common sense we must get more of it. Postal voting needs to be tackled.

Any systems an abuse if it doesn't deliver a democracy.

Your criticism of the present postal voting system is valid Rosa; as is your bewilderment that none of the political parties seem interested in making it more accountable and auditable. All of which adds to the conundrum of why such questionable tactics are allowed without being challenged.

Especially in the case of Scottish politics when the SNP claim to have aspirations beyond the agenda of Westminsters political club?

I'm surprised the SNP haven't made more of the postal system at the last election RA. There was plenty of mileage in it.

It did indeed Aangirfan but all went exceedingly quiet thereafter.