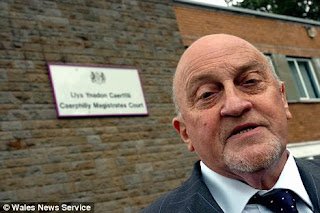 Robert Whatley, 70, was pulled over in his Range Rover for driving without a seat belt as he drove on a country road in Wales. It's alleged officers tried to issue him with a fixed penalty notice but Mr Whatley drove off.
Two of Gwent's 'finest' followed him along 8 miles of country lanes for 17 minutes before trying to stop the £60,000 Range Rover with a stinger device. At no time did he drive above 40mph. Mr Whatley stopped and you can see the actions of the police here. His lawyer has released this video. (Sorry somehow can't embed it).
Mr Whatley, who has heart problems, was charged with several motoring offences and was found guilty of not wearing a seatbelt, failing to stop for a police officer and having tinted windows which did not conform to legal requirements but cleared of failing to stop after an accident. He also admitted having a registration plate which did not adhere to regulations. The pensioner was fined a total of £235 and ordered to pay £300 towards prosecution costs.
£300 towards prosecution costs after this man's ordeal at the hands of these thugs? The police should be compensating Mr Whatley for the expensive damage done to his vehicle and the trauma he must have suffered with one policeman smashing his side window while another stood on his bonnet and kicked in his windscreen.
The police concerned should be dismissed from the service in disgrace. They have no right to call themselves police. They're thugs.
Tweet
Posted by subrosa at 09:21

It's a pretty sickening contrast to the ITV doco on the police officer blinded by Moat, isn't it?

And this is why so many of my own posts seem 'anti-police'. For every decent officer, it seems there's two of the bully/thug/dimwit/control freak type.

Aye Julia. I just wonder how many videos of this type are 'lost'.

Didn't see the documentary last night but I'll find it on here. Time another was made highlighting the injuries of the thousands of our military too.

Vid embedded over at mine Rosie!
code is

good morning,no not you officer ,I was talking to Rosie!

Many thanks Indyan. I'll see if I can put it up.

Yes I think the police are going in the wrong direction. Chief Constables are far too powerful, they need to be brought back under democratic control. Yes under control of politicians because we can vote them out, we can't remove a CC!

I'd start by putting them back into white shirts and ties. The current thug uniform with a plethora of weapons is frankly ott for most policing.

I've no problem with them "tooling up" if they have to do a drug bust in deepest Dundee but anti-stab vests, pepper spray etc are not needed to police rural Angus/Perthshire etc.

And I have serious doubts about ACPOS? What exactly is it? A private company run by chief constables!?

Strathturret, Acpo is exactly that, an unelected, unaccountable boys club which shares its top positions over a 3 year period to maximise the income priviledges and company pensions of the unelected few. They also lobby the government with no opposition or regulation and are a very, very dangerous bunch of people !

Sorry about the code Rosie, don't know what else to suggest, powerful bit of film eh!

The range of offences indicates that he was actually done for failing the attitude test - not showing the police the respect they expect. Every incident such as this only creates another Moat-fan.

They've been going in the wrong direction for over a decade Strathturret. Do you ever read the Police Inspector's blog? He tells it how it is.

Why is it we have the only unarmed force in Europe? Time we filtered out the rubbish such as these traffic cops then armed the remainder. I think they days of the bobby on the beat are long gone. As for all the protests about armed police will cause a rise in armed criminals, I've yet to see any real evidence.

Isn't it a private company using taxpayers' money Indyan? I can't find a thing about funding on their website yet there's plenty about how much they've saved - although no accounts.

Aye, the attitude test right enough John. I remember once being stopped by traffic police and then purposely moved so as I would be looking into the bright sun. They weren't happy when I move over to stand at their side so they breathalysed me. (I'd overtaken then on Riverside Drive, Dundee because their car was being driven erratically due to them talking). They were plain clothes officers.

It all rather distressed me as I'd committed no offence so I wrote to their chief constable asking for a copy of the incident notes. There were none. So then I asked if they had been police as I'd memorised their car number.

The chief constable's deputy came to my home and, after a lengthy preamble, asked me not to take the issue further. Why I never found out but I did receive a letter apologising for their behaviour.

Doubt if that would happen today and it was less than 20 years ago it did.

A tenner says nothing happens to them.

After all, they could have killed him and we know nothing would have happened to them if they had.

SR, As has been commented previously, this just demonstrates that all, rpt all, police should come under local democratic control.

Through that simple move the police force might just then provide the the type of 'service' they should be providing.

They won't be sacked or charged with a criminal offence Weekend Yachtsman. Will be worth keeping an eye on just to see what transpires. I've a funny feeling we'll hear nothing.

Completely agree WFW and with this ACPOS Strathturrent mentioned done away with completely.

Ah, the "Driving without a seat belt" accusation.

Many an officer improved his/her crime detection statistics by pulling that one. A poor driver has no defence; he can't "prove" it was done up.

Amazing how the tints on his windows were deemed 'too dark', yet they transmitted enough light for an officer to apparently notice the seat-belt infraction!

"Amazing how the tints on his windows were deemed 'too dark', yet they transmitted enough light for an officer to apparently notice the seat-belt infraction!"

Good catch. But they'll just claim the window was woumd down when they noticed it, and wound up later.

I do wonder why their claim that he 'bumped' an officer with his car isn't shown on that video though...

Having now watched this clip it is horrifying. If I had driven round the corner to see that scene I think I would have driven straight at the thug whacking the car side window and knocked him over.

That's true Joe. How can you take a picture of yourself with a seatbelt on?

Wonder no more Julia. Look at it from the perspective that it didn't happen.

Strathturret, you'd have been up in court next day and charged with manslaughter or even worse.