Good News But Don't Get Too Excited 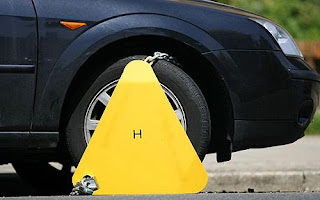 The coalition government have decided to outlaw thugs who take you to ransom by clamping your car for little or no reason.
Of course this applies only to England because here in Scotland it's been outlawed for some years.
The government has decided that enough's enough after 1.5 million (aye that's right) motorists were trapped by ruthless clamping companies last year. They have torn up the last government's ban to regulate the industry in favour of an outright ban. Towing away will also be outlawed.
The 2,150 existing clamping licences will be revoked and anyone who continues to use an immobiliser on private land will face a massive fine or even jail.
Only police or councils will be allowed to clamp or tow away a car in exceptional circumstances; if it is obstructing a road or if the driver is a known repeat offender.
Despite wielding enormous power, those working on private land have been completely unregulated and their victims have had no right of independent appeal.
Pay back time for the clampers methinks. Wonder what their next scam will be? Possibly joining those who pounce on old ladies who drop ash in the street.
source
Tweet
Posted by subrosa at 09:18

If the problem is lack of regulation, then why not regulate them? This, I'm afraid, risks throwing out the baby with the bathwater.

How are private landowners supposed to deal with the 'i'll park where I like!' brigade?

Ah Julia I was hoping someone would say that! That's the solution my friends in England say should happen. They have a large business on the perimeters of a large city and have had problems for years with people parking in the company car park then getting the bus to the city centre.

They've employed one man to oversee the carpark for some time now and he has the authority to clamp. I think the fine is £50. There are very evident notices telling people it is a private park and there is a patrol and cars will be clamped if the owners have no connection to the company. So they're stuck now- again and say they'll have to spend money erecting gates or using a barrier system. All expensive and not least the on-going labour costs to man the place.

Well, not before time

Give a man a fluorescent yellow jacket and a padlock and he is instantly transformed into an arrogant, officious, mindless bully and thug with none of the social graces and civility of even the Waffen SS.

Regulate them !? – the only regulation I would contemplate is that each and every one of the b******s should be handcuffed to a lamppost and not released till –
(a) they had paid at least £500 into a charity of choice.
(b) they had uttered either a ‘please’ or a ‘thank you’ at least once.

I should at this point, confess that wheel clampers are my least favourite carbon based lifeform.

It's amazing they've got away with this for so long John. I mean it's blatant theft and the last government did nothing.

I'll remember that one in my negative moments RA. :)