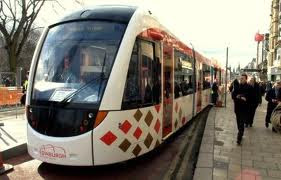 Many regular readers will know the centre of Edinburgh has been like a massive archaeological dig for the past few years and all because a minority of residents think a tram system would enhance the facilities in the city. Politics was behind the decision for the go ahead from the Scottish Parliament and now the good people of Edinburgh are beginning to realise the true cost of this disastrous project.
Paul Hutcheon, of the Sunday Herald, has uncovered more information about the spending of TIE, the arms-length business owned by Edinburgh City Council and set up to handle the project. Its £113.8 million budget is largely funded by the Government agency Transport Scotland, aided by a smaller pot of money from the council.
Since 2006 £1.1m has been paid in bonuses to TIE staff and £130,000 of that was related to the Edinburgh Airport Rail Link project which was scrapped in 2007 because of claims that the budget for the track had spiralled out of control. £2.5m has been spent on consultants since 2007 while £1.2m went on lawyers' fees and external advice during the Bilfinger (the main contractor) row.
They don't do playtime on the cheap at TIE. April 2007 saw £1032 blown on a staff quiz night at a top class Edinburgh hotel and a year later bosses spent £880 on a staff party at another venue. Another £800 was spent in August 2008 on a 'team event' in a bar, while £3102 was fond for a 'board strategy day' in North Berwick.
In February this year, at the height of the Bilfinger crisis, TIE used £1630 of it budget for an 'executive team away-day' at the Edinburgh International Climbing Arena and two months later it spent £2648 on another one at the same location. It must have been very popular because three weeks later they were there again at a cost to the taxpayer of £4017.
Richard Jeffrey, the chief executive of TIE, said of the events: “As regards our team at Edinburgh Trams, they are the lifeblood of the organisation and investing in them means investing in the right people to manage what is a complex and difficult project.”
£29,549 was spent on foreign business trips by staff and according to the figures, senior employees have travelled overseas on 29 occasions since 2007 and £68,000 has been spent on membership of professional organisations since 2006.
Come on Edinburgers, you're being taken for a ride - and it's not on a tram. Waken up and start protesting about the way your city is being abused. If this had happened in the likes of Germany everyone from the management downwards would have been sacked. But I doubt if it would happen in any other EU country. Why can't we manage projects these days? We educate some of the best engineers in the world yet we employ foreign companies to run our infrastructure projects. Is it because once qualified our best go abroad, just like our doctors etc?
Tweet
Posted by subrosa at 09:28

I cannot help but be amused by all this.

Good morning John. Whilst us 'outsiders' can give a wry smile I doubt if it's pleasant for some residents affected by this ridiculous project.

If Edinburgers had any sense they would have insisted the project was halted last year. As it is their council is going to be in hock for generations.

Don't forget 'the board strategy day'. Does the TIE board always meet in North Berwick do you think? Wouldn't you think the board would prepared a strategy long before the first pavement was excavated.

20 foot high pylons in Princes street ( a world heritage site), no washing windows in case the power cables strapped to houses short cct, one stop in Princes Street ( and it's not at the railway station) and now all these junkets for the fools in charge of 'the project' that has gone hundreds of millions over budget and years behind schedule.
Sounds about right for Scotland.
I'm not surprised our best engineers bail out as soon as they can with these 'managers' running the projects. Frightened of being guilty by association I expect.
That 'Paul Hutcheon' link doesn't seem to work SR.

Calum Cashley used to be a great source for the myriad follies in this scheme.

Shame he appears to have gone awol.

I just can not fathom what makes any of them think they can justify this kind of jollying.

Is anyone accountable for it all ?

He is indeed Sandy. I held off writing anything about it in the hope he would then I could do a link to him, but as he's gone to ground, I thought a less detailed post was better than nothing.

Edinburgh council surely is responsible and I wonder if the SG could step in as they've given the bulk of the money. I don't know the rules on this though.

As a Burgher, can I say how throughly dispirting the whole business has been for us all. How some of the business kept going I have no idea. The town couldn't have look worse if it has been blitzed. Sambles, horses and stable doors come to mind! The best of it is there are miles of old trackbed round the town (Mr Beeching's delightfully thought through plan) which could have been used largely or in part. But no, we had to have the blasted things running right down Princes Street.....what a bunch

Dram, being an outsider I'm loathed to give an opinion about the project, other than from an outsider's viewpoint. But I can't help agreeing with everything you say.

I'd no more visit Edinburgh for shopping these days (which I did constantly before the demolition) than think Dundee.

Have I told you about the shopping in Dundee? Aside from their parking facilities it's mainly in these American styled malls which are so claustrophobic they can be oppressive to any shopper.

Planning authorities permitted these buildings' use without regard to our High Street shops. Is it any wonder our high streets are emptying?

Don't these planners realise some people will not adapt to change? Of course we don't matter because the less informed are happy to drive along to the out of town malls.

Dont you all over Scotland ever forget you are all helping to pay for this folly, ( as the Victorians would describe it) thanks to labour and the lib.dem, because they could( force you to pay).

Very expensive politics,for something which is looking to be more useless than we thought at the start of this.

But what the hell, politics is only a game to the politicians who forced this on us.

Never mind, elections coming soon, mind who you vote for.

This could affect the SNP vote in Edinburgh because they're in charge of the council, along with the libdems Apogee. Difficult one.

And people have short memories as to who caused all this and why. A lot of the responsible ones are gone.
Maybe history lessons should be taught now and again !