Visiting Edinburgh? Be Prepared for a Building Site 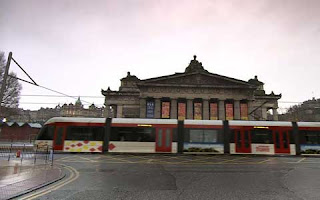 In 2007, when the SNP government took over from the Lab/Libdems, there were a few outstanding matters which demanded attention.
One in particular was the demand from the unionist parties for a tram system in Edinburgh. I should amend that to a tram rail because the proposal was for one tram line only serving a very small part of Edinburgh.
The vote regarding the Edinburgh trams was out done by the unionists and at that point John Swinney said the (SNP) Scottish government would give £550 million and not a penny more.
The whole project has been a disaster for Edinburgh. The streets are still in 'dug up' progress and have been for well over a year. Edinburgh looks a disaster and it's such a shame, because it is a very attractive city. I'm quite sure the year-long standstill of the project will do little to encourage visitors to return, although many only visit once in a lifetime as visitors do.
Calum Cashley gives a real insight into a very recent meeting of the Edinburgh Trams Project. If you're a resident, a visitor or just someone with an interest in Edinburgh, it's definitely worth reading his account of how the tram project bosses think they will progress.
For the record I was against the trams because I thought the capital city had a bus service which surpassed any other city and did not deserve to be usurped by a tram system which would not provide a service to 90% of Edinburgh's population.
Tweet
Posted by subrosa at 09:28

I think that you are a bit out of date.

If you follow the link below to Calum's post of last night you will see that he is foretelling that the project could well be cancelled!

Well, as a resident of nearly tram city I can assure you that people I spoke to on the subject (at the onset) were all against it. The busses worked fine. Now the interesting thing is that there appears to have been a polarisation of opinion in that some people are now saying, while it should never have been started it should be finished and others are saying, rip it up. One thing for certain, the town is a dump and none of the people involved in the planning / building / delivery etc., have much to be proud off. Turn up the bagpipes, paint the holes tartan and maybe nobody will notice!!!!

Trains work well because you can pack a lot of people onto a single train and as they run on a separate railway not the road they can avoid congestion in cities and cut down travel times between cities.

However slapping a light railway, which is what a tramway is, right in the middle of city traffic has never seemed logical to me as the benefit of a railway has always been that it separates out rail and road traffic.

As you point out Subrosa, Edinburgh has always had an excellent bus system and I can't see any advantage in replacing certain routes with a light railway running right through the traffic. What happens if there is building work or pipework that closes a section of the tramway in the future? With a bus you can route round it, with a railway you can't.

As a transport system I can't see trams being anymore efficient at moving people than buses, it's not as flexible as a bus system as far as routes are concerned and it seems to be nothing more than a wild idea of a tourist attraction that someone has had the idiocy to try and actually build.

I've always been of the opinion that the Edinburgh Tram system was nothing more than a spiteful, "Hello Present", given to the SNP Government by the Unionist parties to knock a £500 million hole in their budget.

Bugger, that rumour has been going round all week. The meeting with John Swinney hasn't taken place but I'll definitely post anything relating to it.

I've met one person for it Dram and she lived in the expensive flats in Leith. Also she worked in a bank. Door to door service for her and she was delighted.

It was Doug. The problem is even if it's cancelled Edinburgh have used up the £500m given by taxpayers towards it. We can wave goodbye to that.

Agree with you 100% on this one, SR.
The Scotsman has published a couple of letters from me on this issue recently.
Heavier guns are now weighing in.
But most of them are wittering on about renogiating contracts. Or agreeing to pay the same amount for half the line which is currently proposed, which is a quarter of what was originally proposed.
The tram folly should be cancelled right now. Yes, it will cost tens of millions in cancellation fees. But that is a fraction of what it cost to continue, not just in financial terms.
Especially, stop it before the installation of the overhead power lines. That will be the most disruptive, damaging, and dangerous part of the whole process.

What was wrong with installing new trolley bus network?

Cheaper on capital, faster to install, no major earth works and equally as environmentally friendly.

They can be made bendy and carry nearly as much as trams?

For me it is a no brainer but, maybe that is what was a necessary criterion for the individuals who made the initial decision; no brains?

Many cities in Europe have them.

It's the locals and businesses who didn't want the thing that I feel sorry for Hamish. So many small businesses gone to the wall and the inconvenience to people I'm told has been substantial.

I didn't see your letters in the Scotsman. Perhaps they don't publish them online.

If Callum is correct there does seem to be a chance it will be cancelled.

Bugger, I can't remember the argument about trolley buses. Wasn't it something to do with emissions?

In some ways I'm pleased the SNP decided to go ahead with this. It's certainly shown their objections were valid.

There are no emissions from electric trolleybuses and they would complement wind, wave or even hydro generated electricity.

According to this link

the trolleybus costs less than the equivalent tram, per carriage and does do have the associated costs of digging up the streets and this is the black hole down down which all the money is disappearing.

What is baffling about the Edinburgh scheme is that they could have had a good hard look at what happened in Sheffield. That was another disaster. I just don't understand how all these very clever people manage to get it so hopelessly wrong on all these big projects.

Bugger, I just can't remember why trolley buses were discounted and trams decided.

It wasn't the people of Edinburgh who decided, it was a chosen few. If there had been a referendum in Edinburgh, I'm sure the majority would have been against.

Is it something to do with our inability to manage such projects Demetrius? TIE fell out with the German firm within 6 months of this starting. That wasn't a good omen.

More than two years further down the line and they're STILL not finished. It's an absolute mess and a disaster for local businesses. Jo