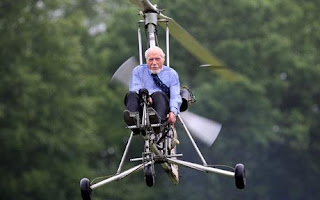 James Wallis, MBE, is a pilot. Not just a pilot but a stuntman who flew Little Nellie in the 1967 Bond film You Only Live Twice.
The retired RAF wing commander wants to attempt a new world aviation record this year to coincide with the centenary celebration of the first flight of the Walbro monoplane - a revolutionary aircraft designed and flown by his father Horace and Uncle Perry.
Mr Wallis, 94, wants to reach a new break neck pace of 140mph over 3km in his amazing hand built twin propeller machine and he set the world speed record in 2002 when his autogyro reached 129.1mph.
But new red tape, introduced by the Civil Aviation Authority since 2002, now restricts autogyros to a maximum speed of just 70mph in Britain so he will be forced to travel to France or America to make the record attempt.

"I am still waiting for the paper work to come through, but the Civil Aviation Authority is very negative.

"I think the only way I can do it without messing around is to travel to France or America.

"The Americans would welcome me over there. They have said they will be pleased to have the aircraft transferred there."

Wing Cmdr Wallis started flying autogyros in 1959 and was the first instructor and examiner for the flying machine.

In 1975 he broke the record for the longest flight in an autogyro when he flew the length of Britain.

He keeps a fleet of 20 autogyros, including a replica of Little Nellie, in a mini hangar at his home in Norfolk and still flies daily.

"They are one of the safest machines to fly because if the engine stops the roters keep turning, so it can be landed," he said.

"Unlike other aircraft it can fly in all sorts of conditions, even stormy weather.

"I used to fly to work every day on the south coast, now I tend to fly more locally."

Good luck to him. I've not the slightest doubt he'll achieve his desire to improve his own record. James Bond would thoroughly approve.

If ever there was an example of a bunch of utter wastes of space, it must be the CAA..!

And yet more NuLab legislation?

"...new red tape, introduced by the Civil Aviation Authority since 2002, now restricts autogyros to a maximum speed of just 70mph in Britain..."

Why? Was there some awful problem with fast autogyros that has completely passed me by?

It's passed me by too Julia if there is anything. Before writing this I tried to find out any reason (such as casualties) but found nothing.

They're symptomatic of the miserable descent in competency of our public bodies charged with facilitating licensing and enforcing legislation ( even if there's a law doesn't mean that it's enforced).

Overpaid, Ill informed, obstructive and high handed apparatchicks are a British curse at the moment. I liked Richard North's recent piece on the CAA

Gordon, you've just reminded me of that. I heard them called that years ago.

I read Richard's piece too and recommend it to others who have an interest in the subject.

James Bond will have retired years ago on a Civil Service pension and be ruining his liver in the Carribean somewhere. 94 year old, tell the stupid old twat not to be so bloody stupid and go back to the care home and slever with the rest of them.

If the man wants to slaver on his autogyro who are we to stop him DL?