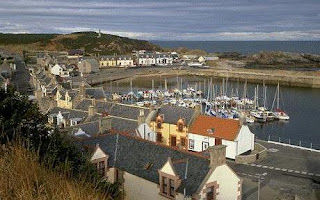 Findochty on the Moray Coast
The SNP intends to launch a legal bid to block the third party leader's debate being shown on TV in Scotland if the BBC does not give it a podium place.
The party is preparing legal papers for an action in the Court of Session on Tuesday which could lead to the Labour, Libdems and Tory debate being taken off Scottish screens. Alex Salmond, the First Minister, says the BBC must either include an SNP politician in Thursday's debate or organise a fourth debate with the nationalist voice heard.
An appeal has also been launched for £50,000 from ordinary members and supporters, which Mr Salmond says is required to pay for the Court of Session action.
The SNP's case against the BBC is based on guidelines laid down by Ofcom, the broadcasting regulator, which defines the SNP as a 'main party' in Scotland, along with the Tories, Labour and LibDems. These 'main' parties must receive equal footing. It has also highlighted separate BBC guidelines which state that the broadcaster must be 'aware of the different political structures in the four nations of the United Kingdom and that they are reflected in the election coverage of each nation.'
Some will say this effort is futile but it is a necessary one. The BBC must be held to account for ignoring the governing party in Scotland during a UK election. Margo MacDonald has her say on it in today's Sunday Post (click on her name in the left-hand-side menu).
Note: The photograph accompanying this post is a request from one of my readers. Beautiful isn't it and much more pleasing on the eye than the BBC logo.
source
Tweet
Posted by subrosa at 10:59

The SNP has a moral case, if not a legal one.

As we know, the MSM, including the BBC, especially in Scotland, are biased against the party.

This may be the "Karma" election though. A hung parliament will favour the SNP and create a more balanced society all round. If it looks as if they are in with a shout in your area, I would recommend supporting them. If not, perhaps one could register one's dissatisfaction with the main parties by voting for the official Raving Loonies.

Let the snp waste their time and money pursuing another in a long line of hopeless causes..........and means they will have less money to fight Labour with.

well done Alex.he will do anything to get on TV bit pathological if you ask me

Well, the courts will decide if it's a waste of time or money.

You just continue to vote labour. Bit pathological if you ask me.

It's a sma' point Mr Weasel, but they're actually the 'Official William Hill Monster Ravin' Loonies', just fer the next 11 days, due tae their sponsorship.

It's the thin end o' the wedge if ye ask me. Next time aroon' it could be the 'Fortnum & Mason Tories' an' the 'Sweetheart Stout Labour' joustin' wi' the 'Persil Liberals' an' the 'Irn-Bru Scottish Nats'

After watching the Sky debate WW I agree with you. Murphy was dire and so was Mundell.

I'm all for this court case because no other party would have the courage to tackle such an issue.

Thanks for your input Niko. No it doesn't mean that at all. The money is being raised separately. Didn't you read the whole article?

Oh Sophia, you can always bring a smile. :)

Surely 'Buckie Labour' would be good?

I had no idea sponsorship like this was allowed. We'll have some fun with this I'm sure.

Any effort to embarass or collapse the third debate will be hilarious and a major slap in the faces for the big guns.

i wish the SNP luck.

Putting aside ideas of "fairness" or "morality" might not the SNP be better off being left out of what could be a nasty mess and then left to take the high ground?

Well done Rosa, but what have you against its big neighbour Buckie; or were you merely referring to what passes as a dram nowadays?

On the more pertinent point, surely its important that the media should not be allowed to control, what presently passes as democracy.

The already use the censorship of denial without scruple to defend the practices of the establishment.

Thanks VotR. At least they've achieved a mention on the MSM today now.

Demetrius, what's the point in taking the moral high ground when nobody's aware you've done it?

Without this action it would only be politically minded folk who would know.

Now now RA, you know full well I was speaking about that monastic alcoholic beverage.

Has it not always been so RA that London parties control the media output?

Rosa, there was an interesting article the other week in the Scottish Review ( I cannot remember the title or the author - but it was not Kenneth Roy) that had a reference to the status of the Crown Estate.

I'd always assumed the Crown Estate was some feudal hangover like primogeniture; that had morphed into State lore as a source of income from assets nobody thought would have any value. Or had been politically created like the Extra Regio Territories, to protect Westminster's interests in the oil and gas finds.

But, according to the reference Crown Estates is merely a name, purely a vehicle for management purposes whose control over its assets is at the gift of the appropriate minister.

To come to the point it's conceivable Holyrood may already have the executive power to move on this by making the airways part of the Crown Estate and controlling/licensing BBCs use of them.

Now wouldn't that be fun.

That's right RA the CE is controlled by a Scottish minister. I looked for more information about it on the SNP website but found none.

It would indeed be interesting if we did have that power. I can hear the protests from here can't you? Ye cannae dae that!!