Dundee Goes for the Triple 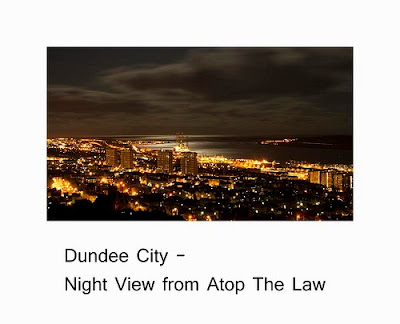 Image from Flickr
There is all to play for in the Scottish seat of Dundee West. Labour has held the seat for years and the present incumbent, Jim McGovern, said:"Sometimes people forget about what went on before and say it's time we had a change".
Dearie me. Mr McGovern, it's because people remember what went on before than the SNP now have the Holyrood seats, the council and the other Westminster seat.
The SNP candidate is city councillor Jim Barrie who requires a swing of just over 7% to win. Mr Barrie, a radio officer who worked with GCHQ for more than 20 years said: "I became a Nationalist after Maggie Thatcher took away my union rights on Burns Day in 1984." That was the day when unions were banned at the GCHQ monitoring centre.
The SNP only took over the council last year so there is little, as yet, to see as a result in the change of the political atmosphere. If they pull off the planned waterfront (so long awaited) and the building of a V & A Museum then they deserve to be the first city in Scotland to be SNP at every level of government.
I'm sure Mr Barrie will oblige.
source
Tweet
Posted by subrosa at 09:15

Dundee's no a city ah ken weel SR, but ah wid be right proud o' the Dundonians if they can dae the triple in May, an' show the way for the rest o' Scotland.

Aye aye. What do you get up to on the Law after dark. You are a one.

It would be great Sophia. Even though I was born there I don't know it all that well these days. I left in the early 60s and it changed radically. Not least because a road bridge comes right into the city centre. Aye, the centre.

That's labour for you.

KBW, I can remember the days we used to go up the Law in the dark but none of us had a camera. It still looked great then because the jute mills would be lit up with the night shift on duty and the ships in the docks.

Incidentally should Jim Barrie succeed we will be represented at four levels by the SNP not three. We are also represented at the EU by SNP MEP David Hudghton

Rosa, this is getting a wee bit partisan.

Ah mean, whit about Findochty? There hasn't been a mention of that on your blog nor a picture.

However, I will admit to a few shivering nights clutching my cojones in a desperate attempt to retain life on Barry Buddon? (Excuse the spelling)

And for the uninitiated I should explain the there's no 'Mr' before the Barry or the Buddon.

I think you'll find it's Ian Hudghton Munguin and the reason he wasn't included was because he represents an area not one city. The triple is for Dundee and Ian is for all of east Scotland (if I remember correctly).

Fear no RA, your wish will (hopefully) be granted.

Ah, Barry Budden, the place where boys become men or go home to their Mums.

Barry Buddon is that no where fearsome weapons explode down the range and grown men go weak at the knees?

No its the place where your told to dig a trench and lie in it; only to find its a paddling pool when the tide comes in.

And fearsome explosions were nothing when compared to the grub issued from the field kitchens.

I've walked to Dundee from Buddon; gone to a dance, seen a lass home then back to the line and nobody of import noticed.

But that was when more than hope sprung eternal.

KBW, I've seen many a grown man, having spent a weekend at Barry Budden, sitting in Vischocci's in Broughty Ferry and having to use two hands to hold onto his cone.

It's a fearsome place right enough. Mind you it could be worse as I've often said. Because it's the east the midgies aren't as bad as the west.

Ah RA, in the days when they had dance halls with live bands playing good music. Sadly all gone now in Dundee, although I was at a dance a few years ago billed 'The Big Band' evening. Was a superb night's dancing. Packed to the gunnels too with the average age being about 50. Wonderful.

Well Munguin you half wit. That's you put back in your box till next year. Two mistakes in one post.... And you with all these letters after your name. They hand out doctorates for smarties these days. Numpty.

Oh Tris. I couldn't reply to you until I'd my keyboard dried from the tears of laughter. Thank you young man. Best laugh I've had for days.

I thought I was being quite erm... diplomatic with Munguin too. :) :)

NO point in being gentle with Munguin SR..... He thinks the word 'subtile' means under the slate.

Ah, then I'll be quite brutal with him in future Tris. Don't know where he got the David bit from. Nobody in the Hudghton family is named David.

SR: I'm sure it would have been a momentary lapse of concentration. I know for a fact that the two men are aquainted.

Tell him at his age he shouldn't be having senior moments. They arrive all too quickly. :)

nah, you tell him. I'm already dead when/if he reads this. :¬)

I'll take the easy way Tris, and let him read it for himself.