When In Doubt Be Religious 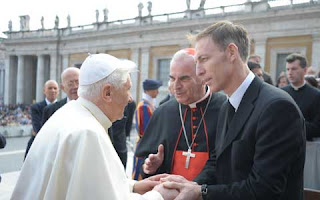 Jim Murphy, the Scottish Secretary (pictured above right), has decided to play the religion card in his electioneering.

Speaking at Westminster to Progress, a Labour think tank, Mr Murphy will say: "In the US faith has long played a central part in politics - not surprising for a country where 60% of people say that God plays an important part in their lives.

"But it's wrong to think that it plays no role in British politics."

He will tell his audience that research from the time of the 2005 general election suggested Labour support was strongest among religious people.

Mr Murphy's speech is partly an attempt to stem the tide of Catholic and Muslim voters north of the border who have switched to the SNP.  In recent years Labour has seen support drift away following rows over gay adoption and the scrapping of Clause 28 which banned the promotion of homosexuality in schools.

In his speech, the Scottish Secretary will also claim that the Bible gave "the Labour movement the intellectual legitimacy to challenge the old orders."

Finally, in an apparent broadside against the Nationalists, Mr Murphy will link patriotism and support for the UK with faith.

The above is part of a labour press release published in today's Scotsman.

This plan of Jim Murphy's could well backfire.  In fact, in the east here it will possibly be a damp squib, a very damp squib.  Religion is not an issue in this part of Scotland. It's in the west, where Jim Murphy has his seat, that religion features more prominently, although in recent years it seems to matter far less.  The days are gone when every Catholic votes according to their leader's wishes.

I could say this action of Jim Murphy's is distasteful but I won't, because it's really just rather silly, in a country which wishes to welcome those of all religions and none.
Tweet
Posted by subrosa at 09:09

Acht stop yer whingein, Subrosa. At least this gives you a chance to bash Roman Catholics - a practise which this and so many other blogs.....

Religion's a bitto a minefield, eh? I think politicians should leave it well alone.

The examples of Ireland, Iran, USA and even UK under Blair show us how dire things can get when esteemed leaders claim to answer to a higher authority than the eople.

Everyone knows Jim Murphy, but who the heck is that bloke with the white hat holding his hands?

If ‘patriotism’ is the last refuge of a scoundrel

Then ‘religion’ must be the last refuge of a politician

For once I agree with you Naldo. :) Politicians should leave religion well alone. They don't 'do' it well.

As they say "There are no atheists in fox-holes" - and I suggest those cowering in fear of political oblivion are seeking more to save themselves rather than us lot still above ground.

I doubt Mr Murphy has had a religious revelation - but more of a spiritual speculation on his odds for re-election.

Smiley Stephen Twigg Clarinda, labour had to find him another job.

Spiritual Speculation? Just wonderful. Thanks for the laugh.